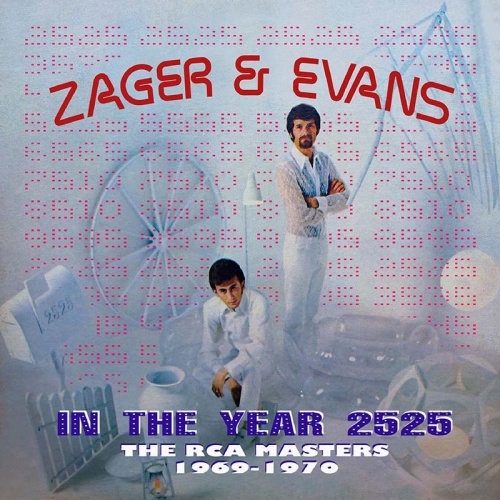 Collection of the “In The Year 2525” hit-makers’ two albums made for RCA at the turn of the swinging sixties, along with three bonus tracks….Ian Canty ponders a tricky time for Pop and indeed the Western World….

Despite the general tone of optimism of the decade, along with the celebration of innovation and novelty, as the 60s drew to a close a new wave of paranoia was making its presence felt. The proponents of this downcast trend focussed mainly on the dehumanisation and manipulation of man via the very same emergent technology that was in the process of powering a rocket to the moon. This fear manifested itself amid the popular culture of the time in film, television and music (which is, of course, which is why I am talking about it here). It may seem crazy today but for that split second in time Zager & Evans’ one hit wonder “In The Year 2525” shared space with David Bowie, whose breakthrough disc “Space Oddity” was similarly themed. In fact both acts did have a little in common, with careers that began in the early 60s, a bit of a Folky background (undoubtedly more so in Z & E’s case, but Bowie was nifty himself with the acoustic when not consumed with his Anthony Newley obsession) and were at the time trying to break out into a more “pop” context from these roots.

For DB the hit would be the beginning of a long and fruitful flirtation with the charts, as he went onto have a massively influential, successful and diverse pop music career. Zager And Evans, after their moment of glory, disappeared almost completely. Now, I’m not for a moment suggesting they where anywhere near Bowie’s league, a colossus in music, but at that point in 1969 could anyone have said that it would turn out this way on the scant evidence that was at hand? The point being really that both songs were prime examples of the doom-laden obsession of the era with modern inventions taking over people’s lives and slowly enslaving them and it is a thought that still has currency today (perhaps even more so now, where people can’t live without their phone or I-pad).

Anyway, with that said, what about Zager and Evans? Well they were a folk duo from Nebraska who actually wrote “In The Year 2525” in 1964 (well Rick Evans wrote that and all the songs, Denny Zager being firmly in the background singing backing vocals and playing guitar) and met as part of Beat outfit the Eccentrics. They stuck together after that band split and began to play the local gig circuit, doing so almost right up until their big hit. The Latin-sounding horn section and increasing desperation in the delivery are what really catches the ear on “In The Year 2525” and the oddly Joe Meek-like production – in fact it does sound strangely old fashioned compared to what was considered cutting edge even in the mainstream Pop charts. In fact it is really a Space Age “Eve Of Destruction” really. Still it was a massive hit reaching number one on both sides of the Atlantic and assured the two a foothold in the minds of fans in both pop superpowers.

Despite the modernistic pretentions of the pair, the LP “2525” is more a gentle “Simon and Garfunkel goes Psych Pop” sort of affair than anything else. “Taxi Man” with its “groovy” guitar breaks is a good one though and tries to cut loose from the surrounding MOR, though the balladry wins out which is all very nice and everything but nothing truly special. When they say “take a trip with me” in “In The Land Of Green” you know you’re more likely to be going on a picnic rather than to the outer limits of your mind. The record isn’t unpleasant (though the wavering vocals can be a little testing from time to time) and Evans does manage some neat twists in the lyrics (the death ballad “Fred” being the pick, but the “Ned Flanders” talk-overs in “I Remember Heide” and “Less Than Tomorrow” are both unintentionally hilarious), but it’s easy to spot why they didn’t go onto any sort of long-lasting chart career. Basically the type of orchestrated, slightly trippy Folk Pop on display was not strong enough to cut much ice as we entered the 1970s and Zager & Evans faced an uphill battle to maintain the attention that their big hit got them.

So how did they go about arresting the decline of their popularity and the lack of a follow up hit? By going completely nuts that’s how! On album number 2 simply entitled “Zager & Evans” the more twee love songs are swamped by strange effects and rapid changes of style and sound, plus some odd detours in the lyrics too. This is a minor cheapo Pop-Sike classic from start to finish. The first track “Overture” really sets the tone, all phased effects and slowed down tapes, alien voices and queasy strings making their previously apple-cheeked folk rambling all the more palatable by being obscured and pulled into different shapes and angles. A couple of tracks like “The Candy Machine” and “She Never Sleeps Beside Me” hark back to their previous album, but even those have odd BBC Radiophonic Workshop-style touches and bits of “found sound” graft on. “Reginald Ludwig” even takes in some rolling Funk, cramming the Kinks, Parliament and Motown in the mixer in a “Toytown” but satisfying way.

“During REM” has nothing to do with the Georgia band of two decades later (the Rapid Eye Movement of sleep would be nearer the mark) and fittingly ends with an alarming “Wake Up” coda. Album closer “Listen To The People” is more in a Soul groove, for a folk duo Zager & Evans sure liked to use a brass section and though the orchestral touches of the first album remain, they’re often phased or otherwise mucked about with in a break from the staid presentation of their debut. It all works by its own internal logic even with the quick changes of style. Despite the fact that this record signalled the end of their career, it actually is streets ahead of the first LP and very enjoyable in its often lurid (especially on “Mr Turnkey”, the tail of a sorry rapist nailing is hand to a cell door) flights of fantasy.

So in summary it is the second LP that makes this issue worth getting, being a fine example of “Fake Psych” (which is not to downgrade it at all. Squares getting weird always has potential to get into areas the “cool” wouldn’t even think about) and and the slightly annoying adenoidal vocal line aside, “Zager And Evans” delivers all the “not quite understanding” weirdness you could wish for. With this reissue the first LP gives you the hit and the bonus tracks are nice to have to give you the full picture, but the second album is much more fun. The thing was that Zager & Evans serious and earnest weren’t much more than a standard issue flowery Folk act, but with nothing to lose experimenting wildly on an LP that stiffed, they actually became a far more appetising prospect.