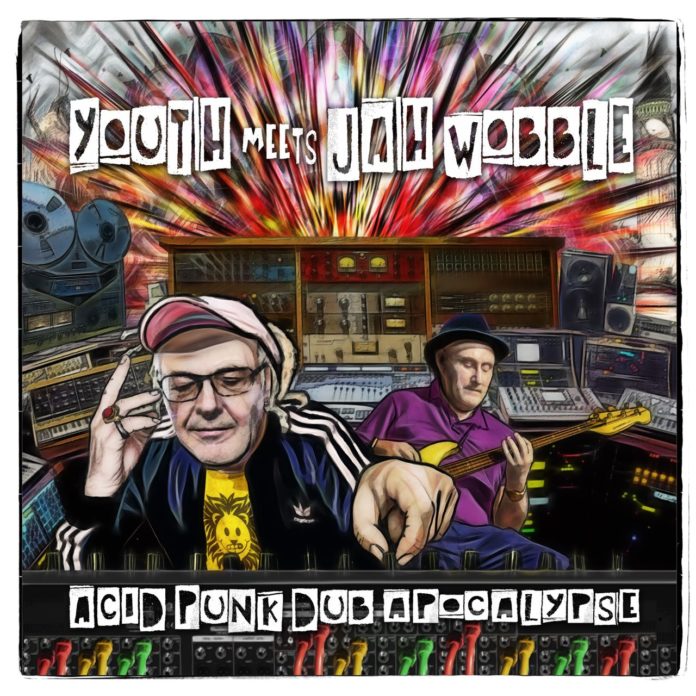 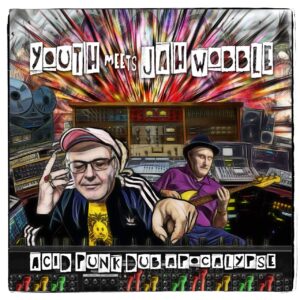 Two veritable giants of post-punk, world, dub, dance … music in general.  Geezers Martin Glover and John Wardle respectively who re-invented themselves as the musical alchemists Youth (“from Killing Joke”) and Jah Wobble (“from Public Image Ltd”).  Both have huge back catalogues of work, production, collaborations outside of the bands which brought them into the public eye and massive respect from several generations of musicians and fans.

(So, I’m not worthy to blow smoke up their asses, criticize or review this really.  I don’t own enough of either of their recent back catalogues… but I wanted to, because the recent ‘A Very British Coup single -with Mark Stewart, Keith Levene & others – was absolute fuckin’ genius – and I was hoping this album would take-up where that left off.. it does in a way, but without Keith and Mark it’s not as fierce…)

Youth and Wobble must’ve worked together before and have no doubt shared a many an adventure… so is this excursion really the Acid Punk Dub Apocalypse of the title?

Nah, of course it’s not – that is an attention-grabbing piss-take to hook in the casual listener (like me, so it worked).  It is a beautiful album of dub and chilled out dance-music with interesting bits of other-music from different-kitchens seamlessly woven in.  It’s Youth and Wobble doing what they do best and sound-tracking the downtime during the run-up to the impending apocalypse.

The single Breaking Shells with a typically cool and understated vocal by Hollie Cook is too mellow to grab the attention of most gormless radio DJ’s to be a proper commercial ‘hit’ but is a great taster of the albums vibe and quality.

Burnt Umber with Alex P from the Orb is very much as you’d expect, the track with Rhiannon is the kind of wonderful Primitive Dancehall which New Age Steppers made on the Love Forever album on On-U.

Full Metal Dub< and Panzer Dub are the heart of the album where vocalists aren’t required and the two bassists just get into a sparse groove – the latter will appeal to Killing Joke fans with its circular Joke groove spliced with Funhouse sax. Another instrumental Lunar Dawn is a thing of beauty – a seven minute Moroder in dub odyssey. Chariot Sky is a bit of a meander in noodling territory.

(Only slightly) Mad Professor Vivian Goldman is in great voice on Rhino – a lumbering groove where sinuous bass wraps itself around some gnarly metallic guitar-work.

One of the standout tracks has to be Rise Me Up with Blue Pearl vocalist Durga McBroom – a great piece of soulful UK-pop-reggae.

The other two tracks are standard Sly & Robbie type fare and personally I do think it’s a shame that A Very British Coup was deemed ‘a separate project’, but nonetheless it’s a pretty faultless, wonderful album and the most commercially accessible album Wobble has put out for ages, thanks to Youths seemingly effortless skill.

Apocalyptic it aint, but magnificent it is. An Acid Dub Punk gathering of like-minded talents and originals making music to soothe and groove to.

Buy on CD from here

Buy on Vinyl from here

Wobble is forever on tour and playing in May with the Orb.