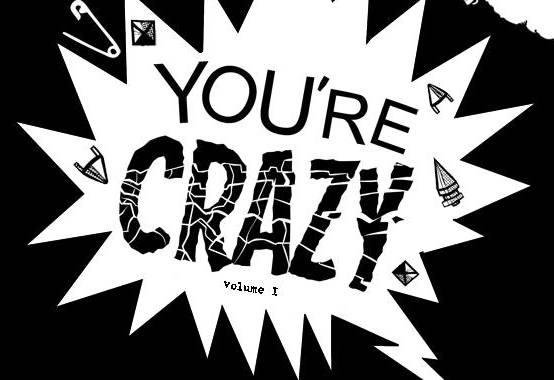 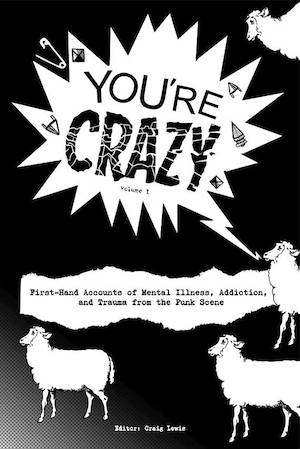 25 first-hand accounts of people from the punk scene who live with mental illness, addiction and trauma resonates with Ian Critchley’s personal journey from despair to hope.

You’re Crazy – Volume I is a compilation of stories from punk rockers the world over who have struggled with varying mental health issues. Edited by ‘Crusty’ Craig Lewis, the book takes the reader into the lives of each contributor in a very personal and wholly human way.

Not only is this a fantastic idea, the tie between an alternative culture and mental health I think is a very interesting topic, but it’s also one that could benefit fellow sufferers in a very special way. Mental health, though somewhat of a “catch all” term, is not something that can be simply fixed with an operation or, arguably, medication the way other things can. The greatest panacea for mental health is information and, more specifically, the sharing of stories from people who have spent their time equally in the mire. I’ve read countless books that have chapters with titles along the lines of “What is a panic attack?” or “How do we define depression” (ad infinitum) and though these help the reader understand their situation in a biological way, for me it never offered much of a life-saver in regards to dealing on an emotional level. What this book does is wade through the swamp of shit jargon and cuts directly to the point. These are real people, dealing with real issues, that are affecting their real lives in ways that push them to the brink daily and are, quite frankly, fucking terrifying.

Which you think would be a morbid affair and, at times, it is. But each story seems to have a healthy dose of hope pushing out of the dirt of struggle. The entire book has an underlying theme that, yes, things are difficult for those who suffer and that every day is a challenge, but it is one that you can not only deal with but push through with pride.

One story in particular, Ben Smart’s, ‘My Life With Depression’, has a section that should be used as the tagline for any and every mental health organisation in the world: “If there’s one positive thing about my life with mental illness, it’s that I’ve earnestly grown to become  the incredibly strong person I am”. This made me think of my own experiences, my own battles, and how I can now finally view what I have for so long called my “ailment” as a positive. How before my head metaphorically caved in on itself and I began fearing every aspect of every day life I was not a driven person.

I was satisfied to spend evenings and money on nothing but alcohol and various drugs, and though I sat around and spoke of how I would one day be a musician, I had yet to even pick up a guitar. When the anxiety came in full force it floored me, caused me to hide away and rarely leave the house. Even when I finally managed to get out the door, it was a struggle just to carry on with what, to other people, were auto-pilot activities. I gave up the drugs but was still drinking heavily as a short-term fix to a situation that needed a long term solution.

But my mind was changing. I had a strange sense of urgency, I suppose you could call it a fear, that my life was not only finite but pretty damn short and I needed to do something with it pronto. I began to learn guitar and wrote some songs, but I was again thwarted by my anxiety. I couldn’t get on stage to play them. The few times I did make it up there I had to drink so much the audience were treated to nothing but an incoherent cacophony of shit (in before the “not much has changed” jokes). So instead I began to write about music instead. I could (more often than I could play) go to a show, hide in the back, and evaluate. I continued to do so and found myself slowly moving forward. Not just within the crowd but within my development as a human being. I was gaining strength and was doing so on my own terms. I made lots of supportive friends yet still I was being held back by my anxiety. I loved to write, but every time I watched a show I would picture myself on that stage. This lasted for ten years.

Then, in 2014, after a huge binge that left me reeling for weeks with increased levels of already high anxiety, I decided I’d had enough. I made a plan of action. I would stop drinking, I would get into shape (thinking “healthy body, healthy mind” probably held some truth) and I would focus wholly on my anxiety and finally whip it into shape.

Which I did, the struggle of which would need far more than a single article to accurately detail, and in doing so I realised something. This curse, this disability, was actually the best thing that happened to me. I’d changed from a person content with the very least in life to someone who knew what he wanted and was taking huge steps towards it. I’d turned from a guppy to a motherfucking shark. I started to play a few more shows, and they turned into a few more, and soon I was more excited about the next gig than I was terrified. If my head hadn’t turned to mush then I’d still be sat in my room, smoking copious amounts of weed, drinking cheap cider, playing Xbox and living in the fantasy that one day I was gonna be a big rock star.

Sure, I still live in that fantasy, but now I’m out playing gigs as much as I humanely can and making it a reality. It’s a constant struggle and it takes my entire being to keep pushing forward but it’s a small price to pay when I know I’m buying back my life.

You’re Crazy, Volume I can be bought from Amazon.

All words by Ian Critchley whose Louder Than War author’s archive is here.