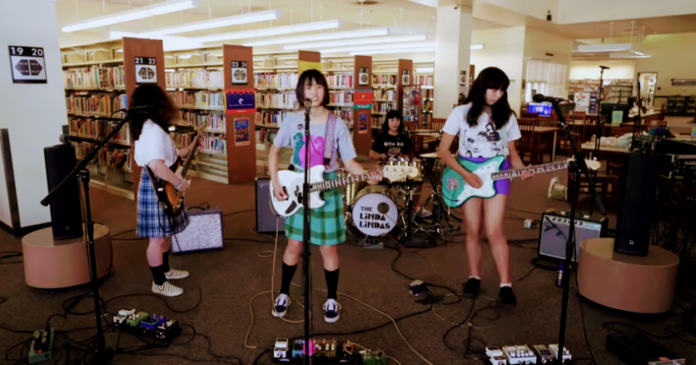 Ladies and gentlemen (and in betweens), I present for you your new favourite band, punk schoolgirls The Linda Lindas. And my new favourite song, Racist Sexist Boy.

Since its upload on 20 May the teen and pre-teen punk quartet’s video has gone instantly viral – and now it’s earned them a deal with Epitaph Records, the LA-based punk label founded by Bad Religion guitarist Brett Gurewitz.

As their adorable ten-year-old drummer Mila, rocking a black Bikini Kill T-shirt, explains in the intro, the song was inspired by a real-life racist incident. “A little while before we went into lockdown a boy in my class came up to me and said his Dad had told him to stay away from Chinese people. After I told him I was Chinese he backed away from me. So Eloise and I wrote this song based on that experience.”

The girls premiered their song, dedicated to “All the racist sexist boys in the world”, in the Los Angeles Public Library, which – rather marvellously – has been hosting a TEENtastic Tuesdays series of concerts, celebrating AAPI (that’s Asian American and Pacific Islander) Month.

The 30-minute set by the band – Mila (10), Eloise (13), Lucia (14) and Bela (16) – included covers of songs by Bikini Kill and The Muffs. But the one that caught the internet’s attention was this heartfelt anti-racist anthem, introduced with a sweet smile – and delivered with an angry kick to the groin.

The Linda Lindas, who made their debut in January 2018 when all but Bela were pre-teens, are made up of two sisters, their cousin and a close friend, and are half-Asian and half-Latin. They have have earned a growing reputation on the LA scene, having already opened for bands including Bikini Kill and Best Coast.

They can also be seen performing in Amy Poehler’s film Moxie, about the Riot Grrrl era, and in the Netflix doc The Claudia Kishi Club.

More about The Linda Lindas at: