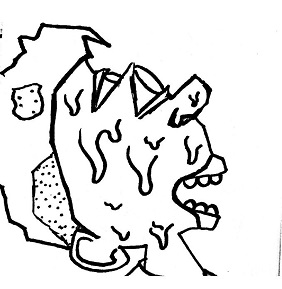 Youngstrr Joey drops another album’s worth of songs and Louder Than War’s Ioan Humphreys is again impressed!

It seems like only yesterday (ok, literally three weeks ago) that we were reviewing a new cassette by the lo-fi nighttime recording savant (genius?) called Youngstrr Joey (aka Cal Donnelly) on the Song, By Toad label.

Suddenly I get a midweek email that announces another Youngstrr Joey release. This time an album’s worth of songs recorded and uploaded to his soundcloud account and here we go again! But this time things are a little different. The ten track ‘Dogs playing pool and drinking pints’ (album title of the year??) is not only musically/lyrically accomplished, but also sonically and recorded as such. Youngstrr Joey seems to be honing and learning and creating and grafting and processing his craft at such a speed that it is not only mind boggling, but also incredibly humbling and impressive.

From the start with ‘Evul twin’ we have great riffs mixed with spoken word lyrics to lovely effect.  Going forward we get lots of nice noise ‘Paddling Pool’ that is gloriously ram shackled, yet very accomplished in its recording and delivery.

As the album progresses, there is the obvious sounds and comparisons of early Pavement singles and EPs which don’t compare in a derogatory way, but add to the ability of Donnelly to craft an infectious pop tune out of noise, limitations and early morning disarray.

Again, as the album draws to a close, we get playfulness (‘Loitering with resent’ is a fantastic song and title) and the Guided by Voices esque school of recording quality of songs, that initially may grate and annoy, but give him another go and your world will be changed for the better.

Youngstrr Joey maybe lo-fi and ram shackled, but he is evidently showing an increasingly sophisticated way of recording his tuneful and accomplished songs that sometimes border on The Cure (!), GBV, Pavement and basically good old fashioned song writing. Highly recommended!

Look out for further releases by YJ on Song, By Toad records

Youngstrr Joey can be found on Soundcloud, Bandcamp and Facebook.