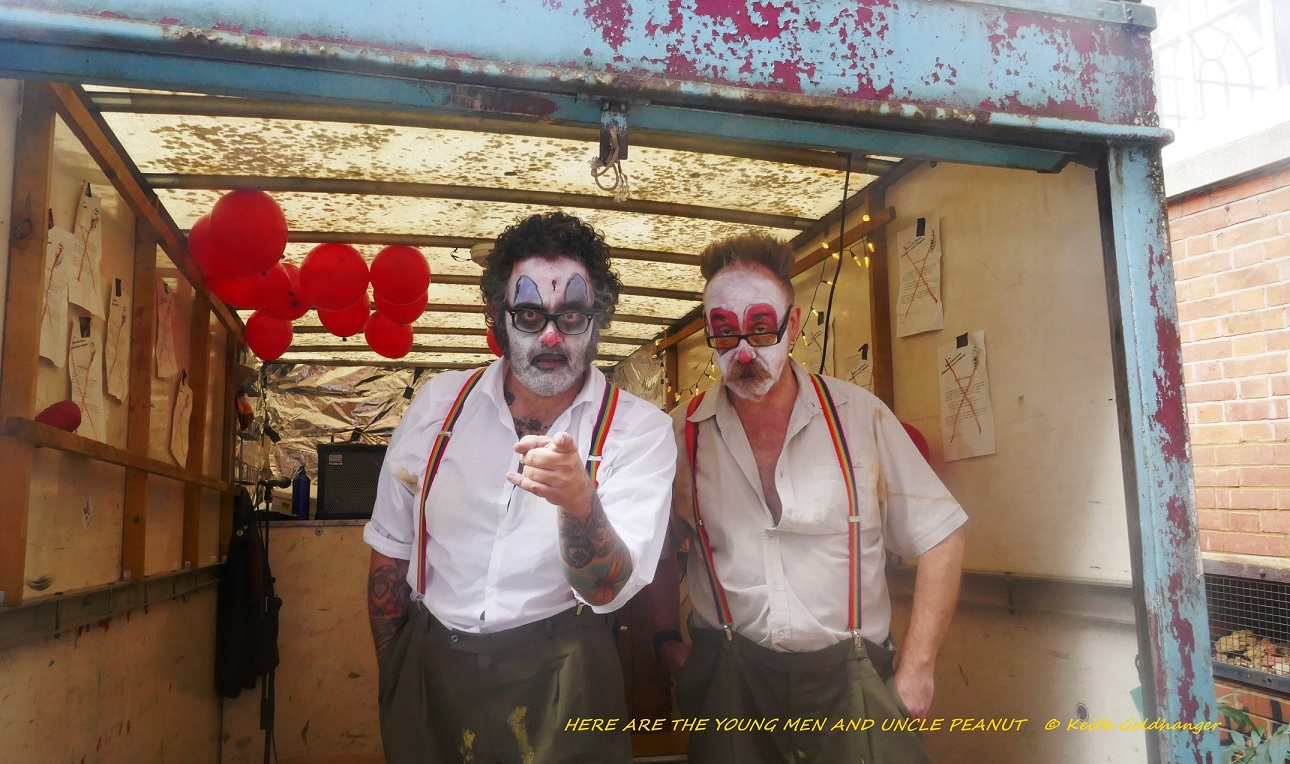 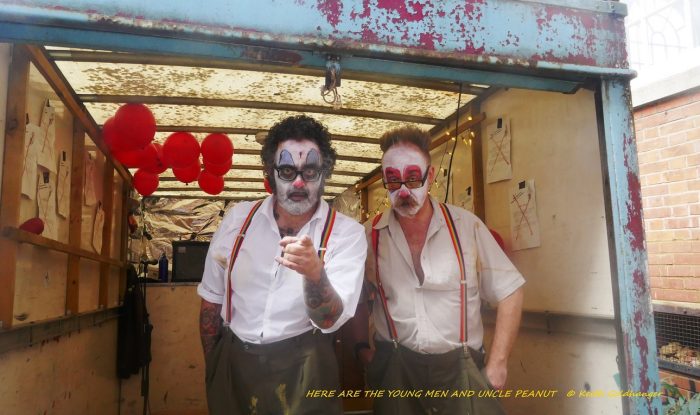 Reading (In the back of a van)

Here Are the Young Men & Uncle Peanut arranged five shows in one afternoon in the back of a van. Keith Goldhanger went to investigate.

‘We have no management, no plan and no aim. We just like to do this stuff and occasionally go out in public to sing and shout at people….’ Here Are The Young Men & Uncle Peanut 2017.

Here Are The Young Men & Uncle Peanut are a duo from Reading who shout over pre-recorded tunes from their laptop and allow those of us with a decent internet connection at home to hear these in all their glory as and when they find fit to make them available on line.

Today they are playing 5 shows every hour on the hour in the back of a van somewhere in the vicinity of The Art Centre in South Street Reading.
That’s all we know as we arrive and show one is already on its way.

Through some glass doors, we can see people with facial expressions one would describe as ‘awkward’ who surely aren’t part of the audience we conclude only to be proved wrong an hour later. Our wait reminds at least one of us of the experience we had many years ago whilst waiting to go into a room and experience The Tiswas Roadshow in Bishops Stortford just as the under 16 audience was leaving.
All covered in custard pies and soaking wet.

The audience departing the opening show today appeared relatively unscathed as they departed but did so in silence.
And no one hung around like we did after show two.

An angry abrasive, slightly intimidating man in a top hat is shouting at us and telling us to buy two beers each as we wait and aggressively hands us a form to sign that we are too scared already to read.
There’s twelve of us in the bar as the clock strikes two, our tickets have not been checked and its correctly assumed we are the second capacity audience for what we only know so far is a gig about to take place in the back of a van.
A van that at the moment is not even visible.

The feeling we have at this stage of the show is one of slight discomfort but we’re committed and prepared to go along with whatever is in store for us.

The room we are lead into looks like the aftermath of a really rubbish children’s party. Altered Images ‘Happy Birthday’ is being played at a low volume and we step over a pile of old carrier bags on the floor that we later find out are gift bags (mine contained a sachet of Cat food). We are ordered (not asked) to take a seat at one of the tables with helium balloons tied to them and the odd screwed up sandwich wrapper discarded on the top. Nervous apprehension turns into uncomfortable laughter and then into sheer boredom. The shouting man with the top hat introduces us to a bloke (‘Inappropriate Children’s entertainer’) who stands on a small stage and reads us a disturbingly very long story that seems to go on forever. Shouting man sits next to him, filming it (and us) on a mobile phone. Two teenagers who we are lead to believe the ‘birthday party’ is for sit to the left playing with their phones looking uninterested. The bloke from the bar next door wanders in, the performance is stopped whilst he gets shouted at by the angry top hat man and is ordered to leave. It’s all a bit unsettling, odd, slightly sinister, an unconventional way of spending a Saturday afternoon and we look around at each other raising eyebrows as if to say ‘what the heck is actually going on here? 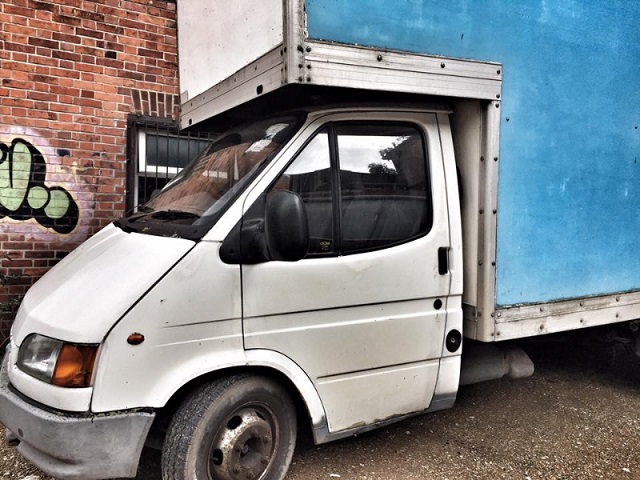 We’ve actually paid a tenner for this.

After being ordered to don party hats, blow into one of those paper blowers that can only be blown in an ironic way at rubbish parties and put on some surgical gloves we are shouted at again and lead into the street, down an alley and alongside a Luton van.

The reason for us being here.

Inside the van two blokes stand side by side with their backs to us.
Bloke in top hat orders us into the van, removes his headwear but is still shouting at us and telling us off if we are not blowing our blowers or clapping.

‘Mark E Smith’s still doing the Fall’ opens up proceedings. It’s a minute and a half long as is pretty much everything the ‘band’ play today. The duo are in our faces now, balloons drape the roof, abrasive bloke not wearing the top hat anymore is jumping up and down at the back rocking the van and singing along. One of the teenagers stands outside on a wall watching nonchalantly. The back shutter comes down, it’s still kind of scary but there’s 12 of us and three of them, two of them are dressed as clowns and one continues to be intimidating and refuses to leave the character he’s taken on for the day. We find out later one of the band had already fallen out of the van earlier causing the event to come close to being cancelled before we’d even stepped foot inside the vehicle today. Had anything untoward happened we could have outfought them, food for thought in case there’s ever a next time.

We get ‘Popstars down the pub’, ‘The day the Hipsters stole our look’, a song called ‘Nobbers’ …It’s a bit like a Sleaford Mods gig but a bit scary, a bit Jilted John, a bit Half Man Half Biscuit. There’s a stage invader – that’s another story entirely.

These are tunes some of us have been listening to this year and now here we are, crammed inside the back of a Luton van that’s bouncing up and down at half two on a Saturday afternoon, we’re all wearing pointy party hats blowing whatever those party things are actually called and almost enjoying it whilst being made aware that we’d get told off if it appeared we were not .

Then it ends and we go for a pint to try and work out what the dickens we’ve just experienced.

Time to pay the band a visit we decide after show three. The shouting man is still shouting at us as we stroll around the back of the venue again for a quick chat before show four.
We’re now in an empty room and wondering for a moment whether this blokes behaviour maybe isn’t an act.

We learn that ‘Here are the Young Men’ and ‘Uncle Peanut’ are not a couple that socialise on a regular basis. They just make music together, swap ideas and make them a reality. Art Brut’s Eddie Argos has been involved with the band, submitting vocals on ‘Popstars down the pub’, Bille Ray Martin (S’Express, Electribe 101) lends her voice on another and a collaboration exists with Evil Blizzard.

They’ve played shows with many of our favourites since they began (Wire, Sleaford Mods, Electric Six) and they put on the odd show in the back of a van on a Saturday afternoon which we have now experienced along with an unsettling sense of fear and intimidation.
It’s also uniquely enjoyable.

The police arrived just after show five ended, used words such as public and nuisance whilst pointing out the flats on the other side of the wall probably containing people struggling to watch omnibus editions of Hollyoaks.

50% of the band go to hospital and a broken rib is confirmed.

The rest of us buggered off home scratching our heads wondering if the shops are still open.

Someone else threw this together. . . .

All words and photos by Keith Goldhanger. More writing by Keith on Louder Than War can be found at his author’s archive. You can also find Keith on Facebook and Twitter (@HIDEOUSWHEELINV).You may subscribe to the Goldhanger Shorts Facebook page too if you so wish.