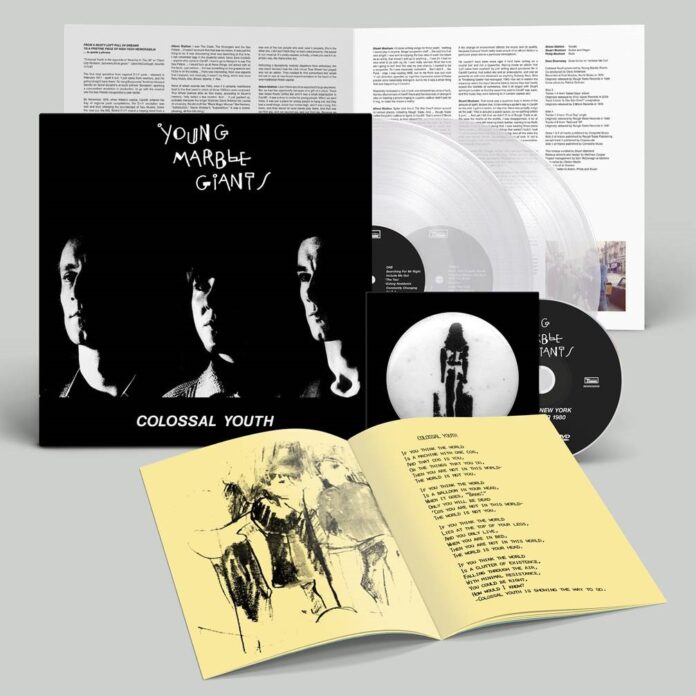 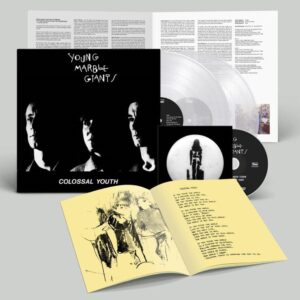 Young Marble Giants are set to release a 40th anniversary box set of their seminal debut album Colossal Youth and Louder Than War’s Banjo looks back at a band less ordinary.

As we all know, in the late 70s the punk movement thankfully arrived and rewrote the musical and cultural landscape by rejecting much of what had gone before and renouncing rock n roll. Almost anything that had its roots in the 60s and 70s was consigned to the waste bin and new bands looking for a break had to do away with their rockisms if they wanted to ride this new wave.

While the music made by these early punks may be looked back on as essentially stripped back rock n roll, the message of rejecting rock music is one that was picked up wholeheartedly by the generation of bands who were to come in their wake. As an example of this artistic arc, Subway Sect’s scrapped debut album was eventually released under the name We Oppose All Rock N Roll. For their next trip into a recording studio, Goddard went past rock for inspiration and came up with an album that took early Sun-era Elvis as a starting point, before going even further back for album No 3, which took Swing as an influence.

This demonstrated the problems involved in rejecting rock music, namely where should musicians now look for their influences. Many took to funk for inspiration, which led to the sound of much of post punk’s catalogue of emerging bands and albums. Others however seemed to decide to invent something new, to truly try to create a music that owed little to the past. This is the path followed by Cardiff’s Young Marble Giants. Maybe Cardiff was so remote from what was going on in the rest of the UK that Young Marble Giants were forced to evolve on their own in some kind of musical Galapagos or maybe the people who made this music were inherently brave, forward facing and idealistic. Whatever the reason, they made music that had few references points.

Consisting of brothers Stuart and Philip Moxham along with singer Alison Statton, the music Young Marble Giants made was sparse and introverted. There was no grandstanding, a refreshing lack of musical ego and a love of negative space. Their songs are deliciously understated and contain many parts where either bass, guitar or keyboard are simply not being played. The guitar, when there is any, is usually played in an extremely dampened manner, where it gives more a suggestion of chords and a basic musical skeleton. The bass often carries the song’s melody but could also drop out for the majority of a song, playing a few notes here and there. A primitive drum machine adds what percussion there is and Statton’s voice gives us something tangible and recognisable to hold on to.

Young Marble Giants’ music firmly subscribes to the less-is-more school of thought, but outside of this adherence there is a sense of established rules being gleefully and deliberately ignored. As well as being minimal musically, Young Marble Giants’ songs tend to be also minimal with regards to their length. Most songs on their debut album are under three minutes with the longest, N.I.T.A being a positively epic 3:31. Their most famous song, the single Final Day clocks in at just 1:43, but in that time, it does everything it needs to do and says everything it needs to say. And if that’s the case, why hang around wasting time?

Their recorded output was also similarly slight, leaving just one album and two EPs behind them. Their album, Colossal Youth turns 40 years old on 27th November and, to celebrate this milestone, Domino Records are releasing an anniversary version consisting of a double album, a double CD or a CD and DVD box set. The tracklisting takes in the original Colossal Youth together with the Final Day and Testcard EPs, selections from the Salad Days compilation and a track from the Cardiff compilation album Is The War Over that first brought the band to the attention of label Rough Trade.

The impact of Young Marble Giants though has carried on down the ages and has some surprising fans. Initially, their audience was perhaps largely made up of people who could relate to the introverted nature of the songs, an audience demographic that the likes of The XX and Belle and Sebastian would also draw on in later years, but Kurt Cobain chose their album as one of 5 most influential records he had heard, a choice that may sound surprising when comparing the sound of these two bands. Cobain however was a fan of UK post punk, inviting The Raincoats to reform to support Nirvana on tour. His sensibilities and intellectual approach also seemed to have something of the post punk about them, so maybe this is where influence can be seen.

Revisiting Colossal Youth 40 years on is to be instantly transported back to my teenage bedroom, the music capturing exactly the feeling of the world in 1980, a world where the splintered reality left by punk made the endless possibilities of youth seem like a genuinely exciting and unknown future. I am again inhabiting a world of cassette players, bad stereos, buying records and listening to John Peel and literally not knowing what the next song I heard would be like and what effect it would have on my young life and my young mind. Young Mable Giants were a big part of that feeling, an age and a time we all like to look back to fondly.

Colossal Youth starts with a few seconds of absolute silence, as if to let the listener adjust to what they are about to hear, a palette cleanser to remove the taste everything else that was going on in 1980. First track Searching for Mr Right is the archetypal Young Marble Giants song, with a basic and unchanging drum machine beat, a dampened guitar line with a disjointed bassline and Stratton’s unassuming and low key vocal. The effect is wistful, atmospheric and haunting. The different elements of the song fit together even though they sound like they shouldn’t, as is some kind of technomagik has taken place in the recording studio as a result of the instincts and imagination of the three people involved. The song finishes as it started, with several seconds of silence.

Include Me Out is a livelier affair with actual chords and a taut funk bassline while The Taxi is a short instrumental lead by simple keyboard lines. Eating Noddemix features a sliding bass riff and occasional guitar stabs. Four songs in and so far each one is as different from each other as Young Marble Giants are from everything else. Constantly Changing perhaps sums up the band’s approach to making music before album highlights N.I.T.A. and the album’s title track perfectly capture Young Marble Giants’ dreamworld.

Songs such as Music For Evenings would fit perfectly well in a Balearic sunset session if they had perhaps been discovered by the late Jose Padilla. Classics like Credit in the Straight World, Wurlitzer Jukebox and Salad Days float by before Wind in the Rigging brings the album proper to a close with a David Lynch-like feel. The tracks from Salad Days are, to be honest, dispensible and sound for the most part like the band experimenting with their drum machine, whereas Ode to Booker T shows why Rough Trade got excited by the band in the first place.

The Final Day EP’s three tracks are essential Young Marble Giants and perfectly showcase their knack for writing off kilter pop gems. The Testcard EP perhaps shows a more experimental side to the songwriting. Issued posthumously, the songs sound frustratingly unfinished, providing a frustrating glimpse into the a second album might have sounded like. But tensions within the band, dissolving relationships and unease at fame and its demands meant the band were never destined to make it that far. While this is a shame, it does perhaps trap the band in amber and leaves Colossal Youth as a bright shining testament to their singular talents.

The anniversary release of Colossal Youth can be bought here.

The full tracklisting is;

All words by Banjo