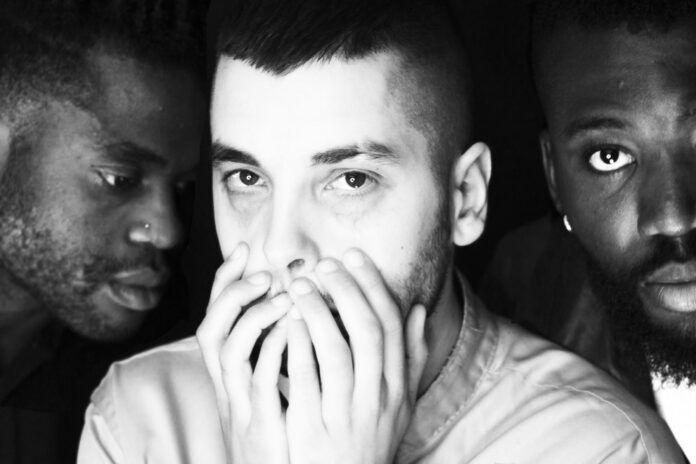 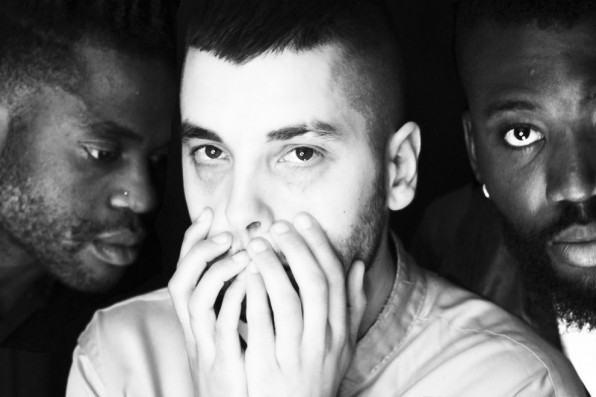 Mercury Prize winners Young Fathers have just announced a 19-date UK Tour in 2015 – full details of which can be found below. But before their breakthrough year came to a close they squeezed one more gig in at XOYO last Wednesday. And my, what a show it turned out to be! Keith Goldhanger explains why you’d have to be stark staring bonkers not to go to at least one, if not all, of those nineteen gigs next year.

One tiny smirk from the corner of a mouth could have changed the way this appeared.

We stand in front of three of the best front people currently all together in one band.

A stand up drummer.

The additional presence of Lauren Holt half way through.

She is the figure we witnessed an hour earlier as fifty percent of support band LAW – a great intense duo to stare at and enjoy the simplicity of all this playing a backing track, flicking some bass strings, re-introducing us to the auto harp and belting out some goddamn brilliant soulful vocals to boot. When she brandishes a knife halfway through to scrape the guitar strings, then holds it against her face whilst entertaining us with some pretty cool “Young Fathers” influenced sounds, we begin to feel that this isn’t an ordinary gig on a cold Wednesday evening, but quite possible the beginning of something very special.

This was one of my favourite gigs and certainly that of a few others here tonight, EVER!

Ain’t it grand when you come home from a gig feeling like that ?

And I blagged a lift home.

Find me more people than those here that will agree with me that this may have elevated the Young Fathers performance on the XOYO stage tonight to one of the best ever (until the next one comes along, say in about a months time maybe?) and I’ll show you… what… One Direction? Lady Gaga or the token blind bloke with a dead granny that won a recent TV talent show?

Occasionally, members turn their backs on us, walk slowly into the shade to sip whatever they happen to be drinking.

Eye contact is minimal, but there’s a knowing look between these people on occasion that tells us they’re not fucking around here. Everything happening up there is a result of some deep concentration and the need to simply produce what we want to hear.

We get one thank you from the band all evening, but we feel at this moment it should be us saying thank you to them for providing us with one of the most intense amazing albums and performances some of us may have ever seen. That’s a big call, granted, but we thought this after the first viewing of these people in the summer.

A second look and we’re sold.

Some of us listen to hundreds of tunes during the year. I’ve made a list. All you need to know is that this would be top of it – My own personal track of the year.

Some of us are close to saying these thing out loud a bit too often, but we’d like to see them a few more times and would also like to have something left to say about these after the next few times.

We imagine already what a second and third album like the (Mercury prize winning) debut “Dead” would mean… Festival headliners in years to come playing music that for once we haven’t really heard the likes of before?

This isn’t yours truly writing notes as the show goes on.

These arms were in the air too much for that nonsense.

This is the result of an experience that leaves the few hundred here standing stunned, too exhausted to bother about wanting an encore.

That was it – until the lights comeback on, the Ronettes “Baby I love you” gets a blasting and grown beings are left scratching our heads wondering if this really did just happen.

YOUNG FATHERS – Four singers, a drummer and a show that makes us think maybe had every tiny incy wincey detail analysed before we, the paying public, turned up to witness and drawl at the incredible world class performance.

Have a listen, have a look and feel your jaw drop.

Next year, you’ll need to be at one of these shows.

All words by Keith Goldhanger. More from Keith can be found at his Louder Than War Author Archive.