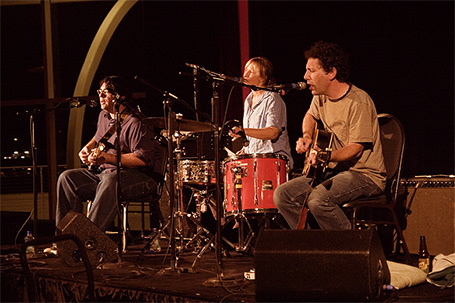 Philip Allen reviews Yo La Tengo’s show at Colston Hall on the tour promoting their recently released ‘Stuff Like That There’.

Yo La Tengo’s enduring appeal as masters of the ‘Quiet/Loud’ aesthetic is in no way waning. Over their 30 years as a band, the three/four piece (depending on the timeframe/album) have circumvented mass appeal by riding the Indie train all the way from their hometown of Hoboken, New Jersey. Over the years, their album’s have favoured the Rockier, noisey material as much as the delicate Folkier ones, often creating two distinct live sets that play to this schizo dynamic. Now with the release of their 14th album, ‘Stuff Like That There’, Yo La Tengo are stripping away the intense, as they did with their 1990 album, ‘Fakebook’, to concentrate on their subtler side.

This tour also finds them adding a band member in the form of David Schramm. David has been an on/off member since their inception. His playing always adds colour and depth and it is a pleasure to have him here tonight. The main auditorium of the Colston Hall seems rather grandiose for this stripped down show, but nonetheless, the band centre themselves in and around pictures of their own artwork that have graced the covers of their albums. Certainly a nice addition to the stage layout.

Georgia Hubley stands centre stage behind a basic drum kit, whilst bassist, James McNew wields a gorgeous upright double bass. Ira Kaplan keeps things acoustic with no sign of an electric guitar. Tonight’s show is twenty six songs strong, spread over two sets and encore, with a heavy emphasis on cover versions, as their albums do. Beginning with Gene Clark’s ‘Tried So Hard’, they delicately float through versions of their own tunes, ‘Decora’ and ‘Rickity’, then through more covers, the highlights being Sun Ra’s ‘Somebody’s In Love’ and Hank Williams, ‘I’m So Lonely I Could Cry’.

Part two of the show is more familiar to me, as they do justice to The Cure, ‘Friday I’m In Love’ and The Rolling Stones, ‘Take It Or Leave It’. The Minutemen’s ‘Corona’ is a joyful surprise as is their cover of The Loving Spoonful’s ‘Butchie’s Tune’, that sounds more Country than ever in this configuration. Their love for classic song craft and lesser known tunes is refreshing but it’s their own songs that sound the freshest, with ‘Ohm’ and ‘Our Way To Fall’ closing the second set.

The band return for an encore consisting of, ‘Autumn Sweater’, The Byrds’ ‘I Wasn’t Born To Follow’ and the sublime, ‘Today Is The Day’. Schramm’s guitar playing throughout the show adds incredible balance to the overall sound, matched perfectly with Kaplan’s ever so elegant whispered singing. I think it’s pretty obvious that this stripped back performance could have done with more intimate surroundings, but despite this, the band proved their worth as consummate songwriters with an incredible ear for a heartfelt melody.