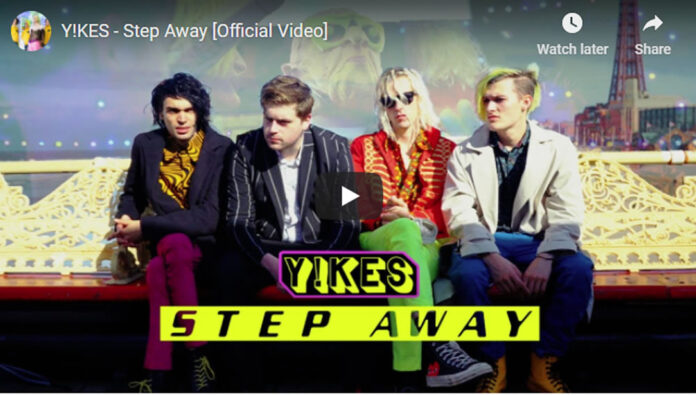 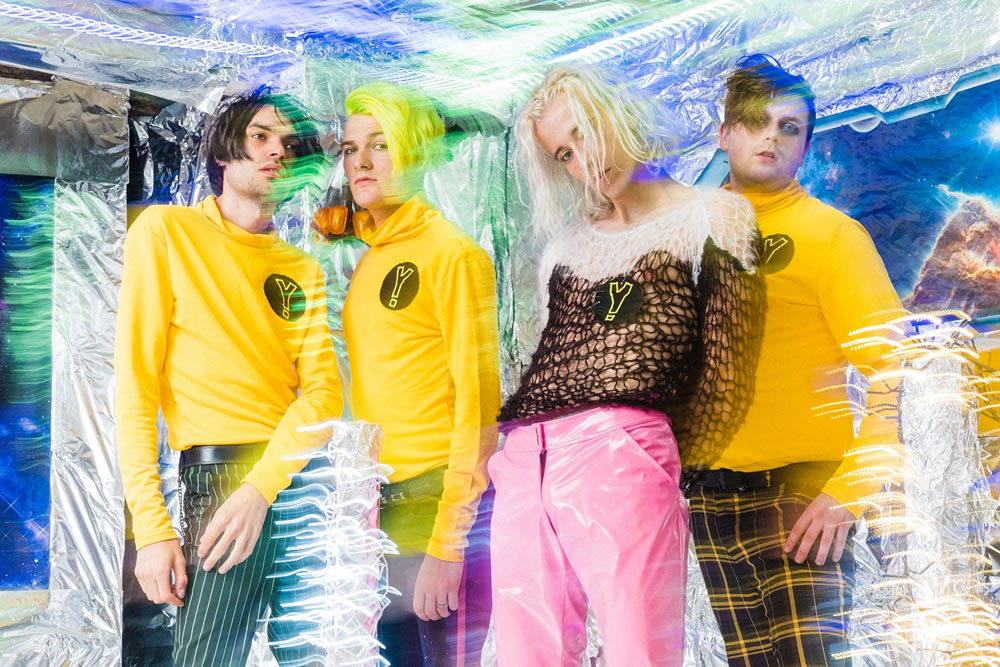 Birmingham dandies Y!kes release their second single from EP Massive with accompanying video. Nigel Carr, not only stalks their video shoot but gives a psychedelic thumbs up to the latest release.

Who takes their wife to Blackpool for the weekend? Well, me in fact – we just wanted a couple of days away so decided to head north on the M6 to the town we visited when we were kids. It’s not changed much, the clairvoyants on the pier, the heady haze of fish and chips, the funfair and the tower. Something, because of Covid you need to book way in advance!

I was on the north pier buying some sticks of rock for the kids when I spotted a group of four individuals who were either on a stag do or were just out on a mad weekend. Dressed variously in acid Sgt Pepper garb, purple trousers, and yellow Docs, they stood out in the crowd, but being Blackpool no one batted an eyelid!

As we walked down the promenade, there they were again, until we finally passed them sitting outside one of the many beachfront hotels (Oh how glamorous it sounds!) sipping beers. I thought nothing of it until I was preparing for Louder Than War’s radio show this Wednesday and found an email entitled “Y!KES x LOUDER THAN WAR” then another one “Y!KES x STEP AWAY”. I watched the video only to find the exact same bunch of lads starring in their very own Beatles’esque mad romp around Blackpool, being pursued by a made alien called ‘Terry’, the intergalactic scoundrel!

Y!kes are like a breath of fresh air – a solid blast of good time, Kooksy, knock around fun – just what we need whilst we are in the depths of the worst pandemic the country has ever seen. “When the going gets tough the Brits go glam” (as Mike Bennet said in our Glamnezia interview) and whilst the song isn’t exactly glam it has all the hallmarks of a good time, up-tempo rock out with an infectious verse and chorus that you won’t be able to get out of your head! Something, along with the accompanying video will make you smile from ear to ear all the way through!

Let’s take a psychedelic walk through the strawberry fields of Y!KES’s latest venture “Step Away”, the second single off their new EP MASS!VE. It’s a catchy, insidious, slick Anti-Pop banger out now on all platforms with a video ready for consumption on the 9th of October. Following a brief stop in London to participate in Sky Arts’ recent Freeview advert, they flew the Y!KES FALCON to Manchester for a socially distanced gig courtesy of MMTV, and then further north to Blackpool for a couple days of sun & shenanigans. Fortunately, Zak Taylor was there to catch it all on camera as the quartet explored the bizarre and beautiful landscape of Earth 2020, whilst being swiftly pursued by their arch nemesis Terry the intergalactic scoundrel. Who will win in this psychedelic battle for humanity? Find out for yourself. This is ‘Step Away’.

Take a listen to Step Away – it’s the perfect antidote to the shitpile that is happening in the UK! Brilliant stuff – I can’t wait to catch them live!