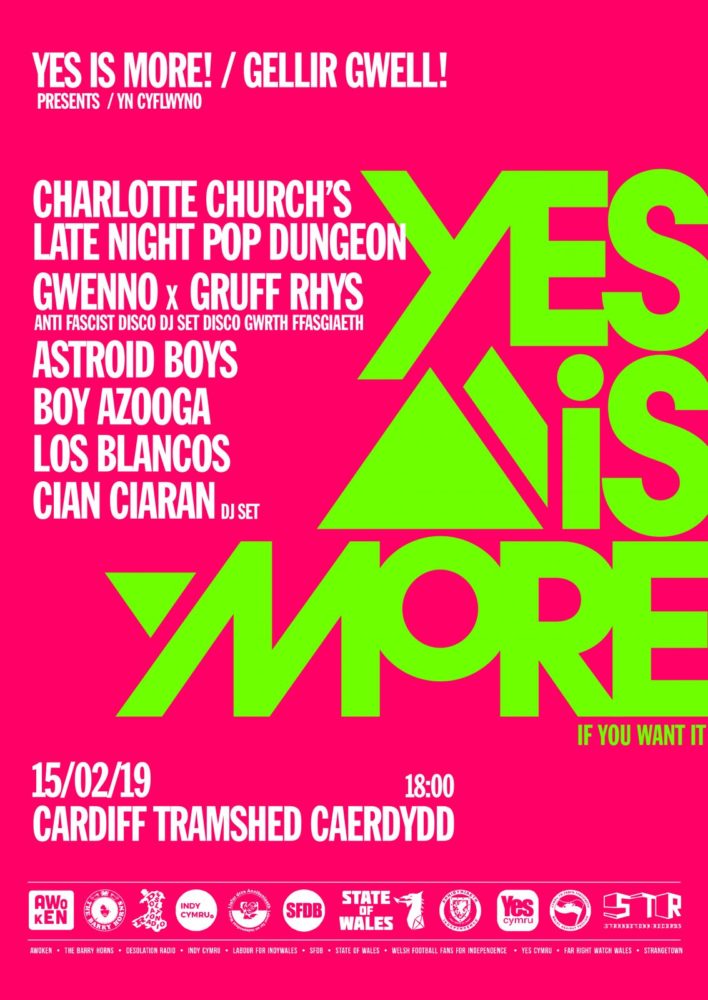 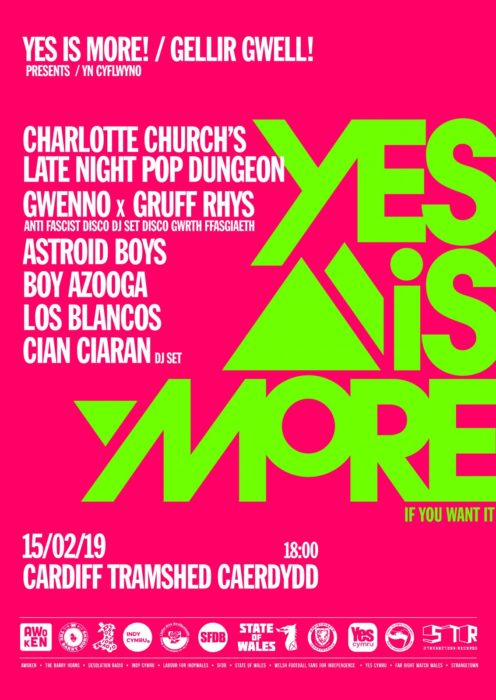 Charlotte Church, Super Furry Animals’ Cian Ciarán and Gruff Rhys, Gwenno and Welsh Music Prize-winners, Boy Azooga are amongst the alliance of Welsh musicians gathering to stimulate new debate for an independent Wales and advocate for ‘Yes’ in a referendum on exiting the United Kingdom. Under the banner ‘Yes Is More!’ a growing bill of artists will perform at The Tramshed, Cardiff on Fri 15 February 2019 to launch a series of planned creative events targeting the sustained threat of a reckless Westminster government to long-term interests of Wales’ embattled communities.

Furries keyboard player, Ciarán, is one of the driving forces behind the first concert and is a known supporter of the Welsh independence movement. As well as being fueled by discontent at the acute centralisation of Wales’ future amidst the Brexit crisis, Ciarán has gathered the support to consolidate and build on the growing interest in Welsh independence.

Having previously shared a stage in support of the Peoples Assembly in the run up to the 2016 general election campaign, members of the Furries catch up with singer and fearless activist, Charlotte Church, to make their voices heard again two years on. Joining the line-up is Cardiff grime/punk band, Astroid Boys, performing tracks from their 2018 debut, Broke. A band that’s currently re-defining Welsh pop music Los Blancos will kick off the night.

Ahead of the concert, Ciarán says: “There comes a time where opinion on something like support for Welsh independence breaks out from the ones you’d expect to be involved in the debate, the politicians, activists, the commentariat, and just becomes common sense. Yes Is More wants to showcase some of that.”

With the yet-to-be-revealed support of more of Wales’ most renowned creative lights, including award-winning actors, filmmakers and visual artists, the drive for change stems from what the collective sees as resurgent discontent. Across the network of campaigners and contacts in the creative industries in Wales, reports denote a marked difference in the willingness of peers to openly endorse Welsh sovereignty in this unprecedented period of constitutional upheaval.

Ciarán continues: “There is a proud tradition here in Wales for standing up for what’s right, we have produced pioneers and visionaries. From the Chartists and Merched Beca to, more recently, the 70 year old NHS and the Welsh Comprehensive educated whistleblower Chelsea Manning. As was the case during the Merthyr riots and the birth of the red flag these were hard fought battles and we need to show that creative spirit once again. We can use the tools at our disposal be that music or the visual arts. What better way to communicate and broaden the debate than to diversify and to be inclusive?”

Gwenno: “What if there are other ways of co-existing? what if we can organise ourselves differently? There is an innate anarchy to art and an absolute potential in utilising it for the good whilst imagining better futures. We want to continue a conversation about an inclusive self-determination by drawing on our past, embracing our neighbours across the U.K and the world with open arms, whilst also making sure that we’re singing along to the best possible tune.”

Gruff Rhys: “Flags, anthems and nationalism for the sake of themselves are cultural dead ends and should be kept for ceremonial sporting events. The beauty of music (and art) on the other hand is how it acts as a precious and secular space beyond the rigidity of politics and nationality where opinions can be discussed and society mirrored, celebrated, ridiculed and criticised. We wish to explore how self-determination could work. How it could help us make a society that values all its inhabitants irrespective of means and background, and how we could take a step back from the colonial, patriarchal and militaristic mindset that prevails.”

Elin Davies (co-organiser/teacher), says: “We need to normalise talking about independence and not have it treated as some quirk by the unionist parties both in Westminster and Cardiff. To theorise is all well and good but there are real practical issues that we need to start discussing. We want to get the conversation started, to get people thinking and talking about the Wales that we want to live in. What could we do better or differently in an independent Wales? There is so much more that we could do and be. We’ve got so much more to offer. The lack of devolved media in Wales means that there is a significant information deficit in what we are ‘fed’. We believe that YiM can contribute to the process of engaging with the people who live in Wales.”

The event will coincide with the real countdown to Brexit, a matter of just weeks ahead of a potentially disastrous exit from the European Union for the people of Wales. Yes Is More highlights the anticipated looming crisis for Wales.

The group of supporters of Welsh independence are looking tentatively at the potential political repercussions should the UK successfully implement Brexit and break away from the EU.

Gruff Rhys : “We choose a hopeful, compassionate debate and fear that complacency could risk Wales becoming both a figurative and literal toxic dumping ground for bad ideas. With Wales left out of all political negotiations and dominated by an increasingly misleading nationalist media at UK level, we feel the need to make a song and dance about it.”

For more information or to find tickets visit https://tramshedcardiff.com/ or