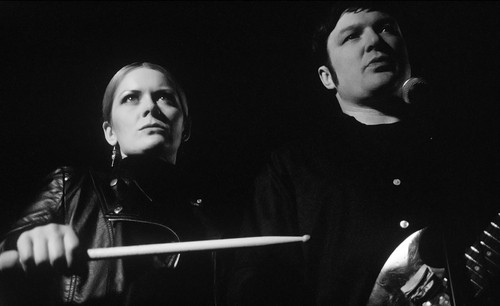 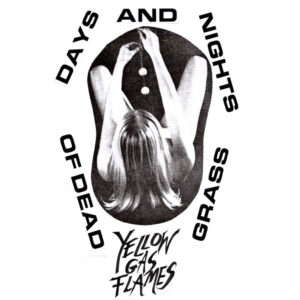 Yellow Gas Flames, release their new album Days and Nights of Dead Grass. Elaborated on, as always to the extremes, right here by Ryan Walker.

Ah yes, the delightful sounds of hell breaking loose. Of something either emerging from belowground or crashing down onto the earth’s yet to be scorched surface. Days And Nights Of Dead Grass is the latest release by Yellow Gas Flames (Mike and Tara Connelly of Clay Rendering, The Haunting, Wolf Eyes, and Hair Police) on the always enthralling Hospital Productions label. Naturally, as someone with more than a couple of screws loose, I’m immediately attracted to the works of something “traditional yet hard to describe”.  It’s a pretty succinct summary of one’s own life, the tale of “the auto surreal road to summer demise”, whereby some condemned soul is heard transferring from Dante’s 6th floor of the inferno to the 7th.

We’re not dealing with songs so much as experiments 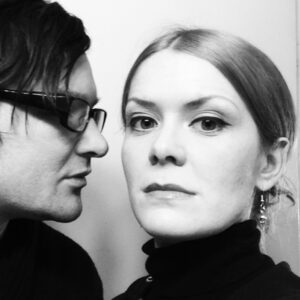 The former unfolds like a car being crushed into cubes or being trapped on a spool of tape traveling backward through time as William Burroughs, residing in Tangiers, pores over his typewriter and hammers away at a soon to be banned paperback junkie or conducts cut-up experiments from his bedroom floor jabbering about cockroaches and centipedes. The latter, a grotesque, galvanic synth experiment, like the finger of a witch finding its way through the sensitivity field of some haunted theremin, some endlessly unfurling corridor, some dense coating of the lungs in thick layers of dark, concretizing blobs of noise, each more sudden than the last, stuttering to a close with every jolt of the screws in the side of one’s neck.

Some kind of percussion, but not much, is located on Mental Struggle. Percussion according to the trigger of a blank pistol being fired. Soundscapes small and large, swallowing some and sputtering some more, explode according to one of God’s own plagues, be it frogs or locusts or pools of running blood. The blues according to blowtorches as soldering iron melodies tickle exteriors stripped bare. Sandstorm is a spaceship landing in the distance, the principle of someone getting sucked into something, a void, a vortex, a split in time and space, furthering the song with the force of a breeze, strong enough to carry things to impressive heights, starved of a beat but still moving forth with a momentous, murderous, atonal motion.

Delirium Bedroom dances and drags itself through the dirt whilst some hysterical Laurel and Hardy sketch at its more violent and slapstick projects and repeats itself onto a thin, silk sheet in an empty circus tent at the center of the some abandoned, modern peninsula. Every crack of wood and crease of skin and collapse of something smaller supporting something bigger is a splendid series of details that excrete dead electric excitement as to what will come creeping around the corner.

Be it nail in one’s foot or a finger in one’s eye or a piano on one’s head. Electric Chair (Sun) really is the sound of flesh being frazzled, either strapped into the fucking thing or simply hovering the hand above the stove and feeling the blood hum in a psychotropic thrust forward through solid cubes of incredible matter. Next in line is Thermometer, which could well be the incessant snap and relentless fracturing of a trap around the delicate ankle of some wandering nobody, whilst Amateur Tell Tale Heart is something, possibly Sun Ra and his Arkestra, possibly something hot in a hypodermic’s body, calling upon us from the other side of the abyss, the middle of which, is a black hole.

Those familiar with the previous works of Tara or Mike, paying specific attention to Clay Rendering and their album released last year on the same label as Days and Nights of Dead Grass (California Black Vows or the Vengeance Candle EP) will be fucked up in a good way by what they hear here. It’s a far cry from their work as Clay Rendering, a noisy post-punk group with a heavy industrial edge and dark, noir poeticism to their often aggressive, stylish songs of death and sex and all the rest (is there a ‘rest’?)

But whereas those succinct, although often grandiose, expansive, ethereal peaks, be it Blood Into Wine, or Don’t You Understand, was a lot like the first time the Ramones played at GBGB covering the Ronettes then mutilated by Kevin Shields or Alan Wilder or Martin Rev, this menacing piece of work is one with the intensity needle firmly sticking and flickering in the red realm until the console glass practically shatters.

An important method of making sense of Hospital, and equally, of consolidating the noise in order to understand and analyse its idiosyncratic nuances according to each artist, is the little, marvellous manifestos that often come attached to each release.

In this case, it was the ”forgotten orgasms” during summer according to the zombie apocalypse, of days and nights. The ectoplasm itself spent rolling around in fields of dead grass as the days descend upon our shoulders and drag us down like still smouldering like lumps of coal from the day prior to last.

I have nothing but admiration, but adoration, for the contemporary artists who wish to evolve and experiment with the extremes. With THESE extremes. And these extremes manage to convey THESE images of those forgotten orgasms and found identities, those fragmented states of play, and splintering ideas about oneself falling victim to the modern entrapments of a city freshly painted each morning only to be eroded against to the filth and grime which coats its bones immovably.

I think this band, is that idea. I think, as a ”small, sadomasochistic family”, that Hospital, is Factory. Albeit, more twilight slaughterhouse, than early hours warehouse rave for the Second Summer.

And it works a treat. Noise is great. It’s all there is…

But this isn’t just noise. It’s Bacon’s Three Studies for Figures at the Base of a Crucifixion.

For more information on the works of Mike and Tara Connelly, follow their Clay Rendering Facebook | Bandcamp