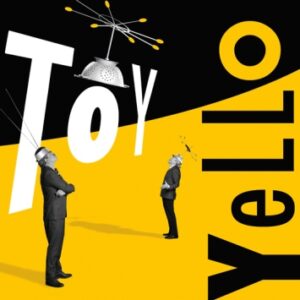 Liz Keating of We Are Quasars reviews the latest album by the electro pioneers.

Dieter Meier is a millionaire, professional poker player, winemaker and silk scarf designer. You might imagine him sporting a cravat, a neat waxed moustache and a slightly ironic expression. You’d be right. You might imagine his voice as a bassy self-assured growl. Right again.

But this is where the predictability ends, as he is also one half of Yello, who have, for nearly four decades, been right at the sharp edge of Euro Synth-pop. His bandmate Boris Blank, synth-wizard and ‘sound collector’, composes all of the music, presumably just in time for Meier to alight from a helicopter – freshly plucked from the deck of a yacht – and purr laconic words into a microphone.

Following the soundscape of ’Frautonium Intro’, the album springs into life with lead single ‘Limbo’. The upbeat tempo and scatterings of cowbell elevate the track, although it still fails to reach the heights it really should: there are several better tracks on the album. In fact, the highlights don’t really start coming until ‘Starlight Scene’, a sultry, bass heavy track, showing off Yello’s moodier side. ‘Dark Side’ is in a similar vein: “Show me your dark side / I wanna lose my mind” Meier intones over ethereal backing vocals. The fizzing synth and witty lyrics of ‘Tool of Love’ see them going back to the wry, ironic nature they are known and loved for. Towards the end of the album the cinematic ‘Pacific AM’ exudes an exotic aura and almost melts into the rhythms of ‘Blue Biscuit’, a summery track closed by a distant thunderclap. The trio of instrumental tracks on the deluxe version of the album seem slightly unnecessary, although there is an interesting disparity between the atmospheric calm of Magma and the somewhat frenetic, industrial-sounding Toy Square. The four collaborative efforts featuring Fifi Rong and Malia seem to detract from the album somewhat, as Yello’s uniqueness is heavily rooted in Meier’s distinctive vocals. This does provide a nice contrast, however, especially against Rong’s breathy, delicate voice on ‘Kiss the Cloud’.

All in all, Yello have something for everyone here, despite having absolutely nothing to prove. Yello have always been seen to be at their best when they don’t take themselves too seriously but on this occasion, their darker work steals the show.