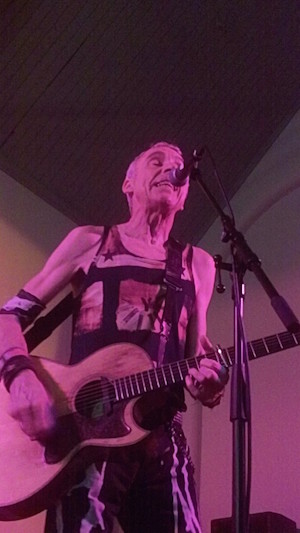 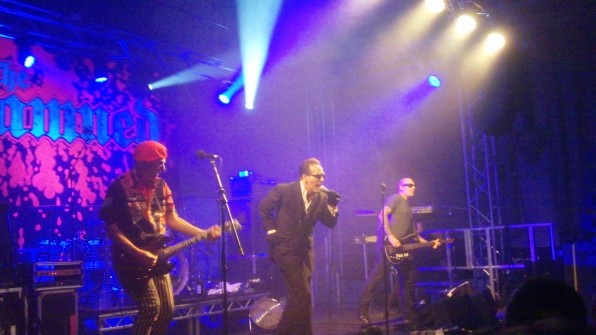 Wakefield’s Unity Works plays host to a line-up of established and underground punk and ska bands, headlined by The Damned. Louder Than War’s Ian Critchley was there to review.

Last week I had been watching TV Smith at Bradford’s 1 in 12 club. The event had been a DIY all dayer featuring a plethora of local and underground UK punk bands before the man took the stage to finish the crowd off. The downfall was that by this point the majority of the crowd were already finished off from over consumption of the £2.00 lager on offer that, I was informed, “wasn’t watered down”. Not that this is any real insult to the people there, everyone was incredibly friendly and there wasn’t a bad soul in the bunch, it just seemed a waste that TV had to play to a now dwindled crowd of people who were asleep on the sidelines of the room, the rest of the snoozers asleep outside of the venue, or so drunk they’d have zero recollection of the magic that was happening within the walls of this Anarchist Social Club. The last time I’d been at the 1 in 12 I’d done the same, so maybe there was something in the beer…
¬
Today, however, I was heading past Bradford towards Wakefield. Not only would I be seeing TV again, I’d also be watching one of my all time favourite bands, The Damned. We arrived around 15:00 and, as doors weren’t for another half an hour, walked around the centre and took in it’s interesting mix of both independent shops and mainstream chain stores. For every Greggs there was a small local owned equivalent and the placed seemed the perfect harmony between big business and the little guy.

The Unity Works, our home for the evening, was one of the greatest punk rock success stories I’d heard in years. Having always been a hotspot for music, it was used for ballroom dancing in the early 1900’s and became Wakefield’s prime alternative music venue in the late 70s, it was established as a community benefit in 2011, to be used as a conference centre as well as a music venue, and by October 2013 the project had “over 200 member investors and had raised the £4m that allowed us to purchase the building from Leatham Estates and start work on site” (taken from here). It opened its doors again only a month before this show, so in many ways it felt like the building’s coming out party.

The day was split into two rooms, the major and minor, both showcasing a multitude of local bands during the day before the punk rock heavies took over in the evening. The highlight of these local acts was The Ainsley Band by a mile. Playing in the major hall, which looked like someone had dropped the roof of a military hangar onto the ballroom it had once been, this five piece ignited the half filled room with their intense music that sounded like a superband featuring members of both Jawbreaker and The Bronx, of all which was performed with the insanity of Iggy and The Stooges. Their sound was chock-full of positivity and, though very accomplished musicians who played tight as hell, it was clear they hadn’t left the idea of on stage fun at the door. This tongue-in-cheek humour poured into their set and even found its way into song titles such as “Jerry Garcia Later”. I didn’t understand why they needed three guitarists and their on-stage banter was bloody awful, yet comical in it’s shitness, but I knew right then this would be a band I would be actively striving to watch again and I headed to their merch to buy a t-shirt that was miles too big. 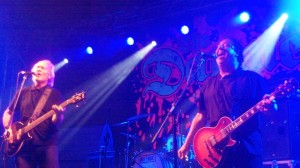 The first of the big boys of punk rock were The Members, and I say that in a somewhat literal sense. Taking to the stage I was shocked to see just how much the punk rock life had bloated the majority of the band, to the point their beer guts were blocking the view of their own “members”, but fortunately this physical deterioration had not affected their musical prowess one bit. Often straight up punk rock, but sometimes slowed to a bluesy sound filled with the best kind of sleaze, The Members played all of their hits from decades ago with the same energy and enthusiasm of their late 70s ‘Sound Of The Suburbs’ days. It just goes to show that you may not be able to teach an old dog new tricks but once it has learnt to lick its own balls, and fucking love doing it, there’s very little else he needs to keep him entertained into old age.

The Beat were playing in the Major hall before TV Smith in the minor. I watched a little, but not being a fan of ska (I know that makes me an utterly miserable dick) we decided to sit in the quiet of the minor hall, a room that looked like the bell tower of a large cathedral, with Tim and chat amicably. I did however catch the majority of The Beat’s tribute to Joe Strummer in the form of ‘Rock The Casbah’ (even though Strummer openly admitted he didn’t write that song and that “the real genius of Rock the Casbah” was Topper Headon) which the now rammed ballroom went batshit mental for.

You’d think that after a day filled with full bands a lone man with an acoustic would feel lacking (I missed the only other act who may have been acoustic to get my camera from the car) but, as always with TV Smith, this was not the case. He treated the early birds to the first ever recorded Adverts song ‘Quickstep’, while the room filled with people pouring out of The Beat, before tearing through his multitude of hits new and old. TV Smith was more than enough without a band behind him, a snarling beast of infinite energy, and the only downfall of his set was how short lived it was. “I feel like I’m just getting started and already it’s time to wind down” he told the audience before smashing out a number of Adverts songs and over running his allotted time slightly.

Before The Damned I had to pee, and so did everybody else in the place. We all jammed into the urinals, elbow to elbow, and I was stood next to an old punker who was stood next to a man who, with a shaven head, big beard and biker jacket, looked like he’d got lost on his way to a DOWN concert.

“Here, piss on that tissue blocking the hole,” the punker said.

The urinal was filled with the piss of a thousand punks and a wet clump of tissue was prohibiting the evening’s piss from spewing down into the drains. I saw my chance and said to the metal head,

“I’ll give you a pound if you unclog it with your hand.”

I’d offered not a financial reward, but an opportunity to test his mettle (mettle/metal, get it?). He raised the bar further than I expected.

And before anyone could stop him, not that either of us would have, he was wrist deep, submerged in a trough of urine and spit, pulling at the soaked paper pulp to let the liquid run free.

I was impressed. I would have shook his hand but…

The swarms worked their way back into the major hall for the headliner. I made my way to the front in order to get some good photos and a great vantage point for the evening. After the usual air of anticipation, Captain Sensible took to the stage hiding his face with what looked like a shopping bag before the rest of the band joined him. Dave Vanian came on with a large bottle of Port (I think it was Port) in one hand whilst clutching a wine glass in the other. He poured a glass and placed both at the side of the drum kit. Throughout the entire set Vanian must have taken no more than a couple of tiny mouthfuls, while Sensible powered through cans of bitter, so I really have no idea why “Two-Sips Dave” thought it necessary to bring the entire fucking bottle.

Out of all of the original wave of UK Punk bands, The Damned have stood out more than anyone else for me. Perhaps it’s due to my teenage flirtations with Satanism and my love for things with a slight air of the macabre, or perhaps it’s just that The Damned are so…damned…good at what they do. The play music now, nearly forty years on, with the same enjoyment and enthusiasm as a band who have just hit the (at least in terms of Punk Rock) big time. This was not a group of musicians who felt that they deserved acclamation or respect for the audience, but a bunch of friends playing the music they have always loved with the same camaraderie they had on day one (even if keeping that friendship alive meant dropping half the original line up and then having a billion different members). 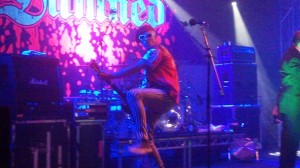 The set was filled with wall to wall crowd pleasers, each introduction being followed by blood curdling screams of approval from the audience, including ‘Neat Neat Neat’, ‘Fan Club’, ‘Eloise’, ‘Wait For The Blackout’, ‘New Rose’ and a fuck load of others. Part way through the set was met with keyboard issues. Sensible jumped straight onto this and commanded the crowd to switch the age old Damned chant to “Monty is a wanker”. Judging by the complete buffoonery and hilarity of Monty’s onstage dancing during the songs lacking keys, it seems the Captain may have been right.

The band ended with ‘Smash It Up’ and as they said their goodbyes and bowed to the crowd one leather clad punk flung himself over the barrier and tried to take the stage. The smartly dressed security were on him before he even got close and forcefully ejected him through a side door, which they then followed him through, before closing it behind them and leaving the rest of the audience basking in the lingering ambience of a great live show by one the greatest punk bands ever.

All words by Ian Critchley. More from Ian can be found at his author archive.

August 12, 2015
We use cookies to ensure that we give you the best experience on our website. If you continue to use this site we will assume that you are happy with it.Ok