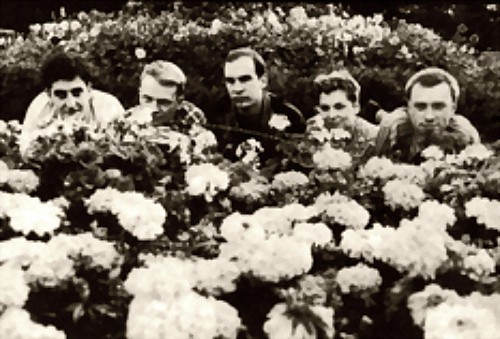 This reforming lark is actually getting quite exciting now. All manner of the weird and wonderful are reemerging and picking up the loose ends.

Yeah Yeah Noh emerged in the middle of the Death To Trad Rock scene in the eighties – all discordant clatter but with classic British  beat tunes and sardonic, clever lyrics. They became Peel faves and went on to record some great eighties psychedelic tinged songs before imploding before the decade ended.

They were remembered, though, by the connoisseurs like Stewart Lee:

“Yeah Yeah Noh were my favourite mix of sneery post-punk and swooshy psychedelia. And now they’re back.

The band are planing a few gigs and have some festival appearances which will be announced on their Facebook page.

Derek Hammond, the band’s ever sprightly and lyrical frontman, tells me that…

‘This is first point of contact, fest info, old sounds, old pics… will of course soon cover new sounds, pics, dates etc as time goes on€œ bear in mind hardly anyone knows we’re back together yet!”

Louder Than War: When we all started we used to sneer at the old bands and the reformations- what changed?

Derek: John’s got plenty of the old attitude, he sneers at himself the rest of us frequently.

Tom: Not a lot, but when you haven’t got a thinning perm, and you never wore tight spandex or were the saviours of rock 20 years ago – it’s a lot easier on the conscience to once again take to the stage for fun and frolics.

Derek: We packed in when we were 23 because we felt old and slightly jaded by the whole indie rock experience. We kept playing together for some time out of the public eye, but to be honest I was still left with a sense of unfinished business. That we never fulfilled our potential.

How did reformation come about?

Tom: John’s having a big 50th birthday bash, putting on a mini festival, and that was the catalyst for us saying, eventually, tentatively, er… shall we play?

John: It’s all very hush hush, but we were also offered a four-figure sum to tour Japan. What would you do? We were too poor to turn it down.

Are YYN relevant in current climate?

John: Were YYN ever relevant? We aim to be diverting, interesting and occasionally thought-provoking.

Tom: Relevant, no way. But we have invested in some killer wah-wah pedals over the past 20 years.

Derek: I don’t want to worry you, John, but they’ve even learned to stand on them. Now there are six of us, most of stepping up to non-toy equipment, and our swirly noise is now the size of big field, pure danger.

Any news songs? (hope so) with great new lyrics?

Tom:€œ We’re too busy remembering and grooving up the old ones!

John: We’re not ready to place all our cards on the table yet, wink to camera.

Derek: What they’re trying to say is, yes. I think.

What do you think of your body of work and the two distinct periods of clattering DIY and English psychedelic.

Tom: Not so keen on the first iteration, but fell completely in love with the psychedelic YYN, in fact I loved them so much I joined them!

Derek: The early stuff was noisy, genuine DIY but it’s pretty much unlistenable now. The later stuff had a bit more lasting charm – but you’ve got to remember that all that stuff, œearly clatter and œlate swirly unpop was written in a two or three year span! We’ve been consistent in every phase though, trying to make the kind of music that we want to listen to.

Is there a plan? Festivals? New album?

Derek: In time. No rush. I get the vibe we’ll be together for longer, this time around. Some groups of old mates go on fishing trips. We set up our equipment in the gardens of stately homes, and set about melting the lawns.

Who’s in the band?

Derek:€œ With John and Tom on the sub’s bench, ready to come on for the last 20 minutes. Get into ’em and fuck ‘œem up!

Tom:€œ Ant, our new drummer, has opened up entirely new doors for us. Beats hadn’t been invented the last time we played live, in 1937.

Derek: Dermot the bassist is a fonky groover. In his very own words.

Tom: And Eva plays baroque keyboards so you can hardly see her fingers move.

John:€œ Crosby Stills and Nash tell us we blow their minds. You can hardly hear their guitars and harmonies.

John: The state of music now is pretty much like it always was. There’s plenty of shit in the charts and lots of shit in the popular media. Sex sells. Celebrity sells. Television sells. Get past that and there is so much interesting and diverse music it’s untrue. What’s good about now is that it is much easier to access.

Tom: It’s fractured, it’s tribal and there’s too many genres! Being able to download the one good track from a band has torpedoed the LP, but what the heck I’ve got a front room full of albums with 1 or 2 good tracks.

Derek: We fit right in. Back in the day we wrote a song called Stealing in the Name of the lord, which was about Adele. Now I’m learning her hand movements and we’re pretty much a tribute act to her tribute act, with the added twist of enormous distorted guitars. Everything is cyclical except irony.

Were our generation of bands always old in mentality so reformation and middle age unimportant?

Tom: I was wedded to the “Hope I die before I get old mantra, until I got old!

John: Morrissey always looked old, didn’t he? He looked 45 when he was only about 20.

Derek: Same with us. We got our ageing done good and early so now we look pretty much the same as we always did.

What do you think of your contemporary bands?

Tom: I still fall in love with bands, but fall out a lot quicker, the cynic rules!

John: No, he means stuff from the 80s! Stevie Wonder he was always good. Marvin Gaye showed some promise, and after his dad shot him in 1984 we very much took up his mantle.Kraftwerk could have been good with a bit more focus.

Derek: We have fond memories of the bands we used to play with, but I don’t play much from that decade these days. I think the Meat Puppets still sound good today. Dexys. Er, La Roux is cool, but I don’t know if she’s still going…