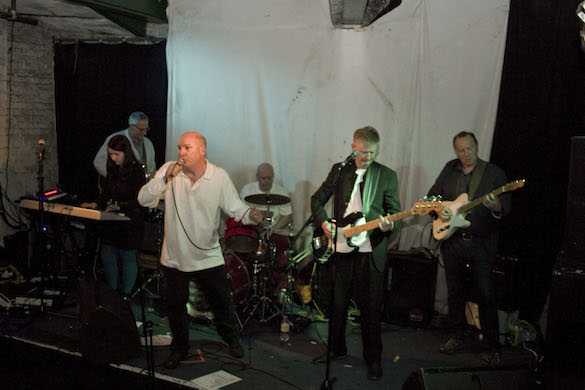 Louder Than War’s Ian Canty catches Yeah Yeah Noh put on a masterful performance in Brighton proving they’re still potent and as relevant in 2014 as anyone. Photos by Phil Guild.

What a terrific night! I can hardly be accused of being impartial (I’ve loved Yeah Yeah Noh since I first heard them on the John Peel Show almost 30 years ago to the day) but this gig was excellent from beginning to end and featured two of the 80s sharpest and most unsung bands. Yeah Yeah Noh and I Ludicrous took up the baton from bands like the Swell Maps, Prefects and TV Personalities in the DIY Punk stakes and added their special style to make it their own. Yeah Yeah Noh in particular came along for me at a time when music was on it’s arse (and the country as well to be honest) and dominated by Miami Vice no socks soulless “Soul”. They came along when we most needed them, as I noted previously at their 229 gig last year, and for that, we should all be grateful.

This is the first time I’ve visited the Green Door Store in Brighton and despite the “Morecombe and Wise” style curtain between the bar and the stage it is not a bad venue at all. Looks like an old stables, but it had a really good sound I thought and this was another great Spinningchilli gig (check here for forthcoming attractions at sunny Brighton). 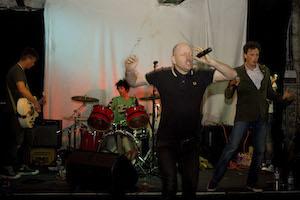 Next came the legendary I Ludicrous (see pic below) and although I’ve seen them a few times over the years I don’t think they’ve ever been this good. And they didn’t even play “Preposterous Tales”! They did, however, do “We Stand Around” which is possibly the only record that really tapped into what it is (or was) to be a football fan in the UK. And also the first time I’ve ever heard a Third World War song live in their cover of “Ascension Day”. Sometimes the keyboard driven songs have an almost Suicide-on-a-budget feel about them, but are no worse for that. A fine set. 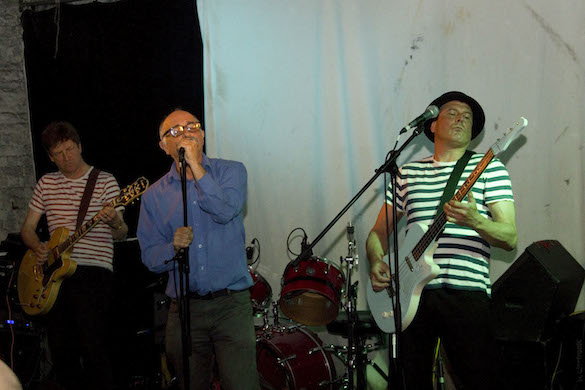 Putting the past aside for a moment and judging Yeah Yeah Noh solely on the present, everything that was always great about them (beautifully observed lyrics, spiky beat punks tunes and full blown psych-outs) are still all present and correct, but they now come with added dance action! The new single “She Pulls the Petal From the Flower” features an irresistible Glam style guitar hook meeting classic YYN wordplay head on and all the other new material (like the newly shuffle-beat driven “Let’s Start A War”) cunningly fuses their old sound with a new almost electro feel to add to the merseybeat punk they always excelled at.

Yeah Yeah Noh haven’t taken the easy option and come back the same as they were, which is entirely in keeping with their attitude. They were always an ever-developing entity, from their beginnings as a Nightingales / Fall style post punk act through delving deep into the psychedelic bag with their debut album and now as the unlikely but thoroughly deserving Kings and Queen of ultra-catchy dance unpop. A new LP is promised soon and that is reason to rejoice itself : 2014 just got better and even all these years on Yeah Yeah Noh are still putting the fun back into being pretentious. A fine evening’s entertainment!

All words Ian Canty. More writing by Ian on Louder Than War can be found at his author’s archive.
Photos by Phil Guild