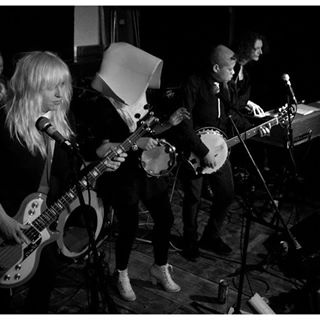 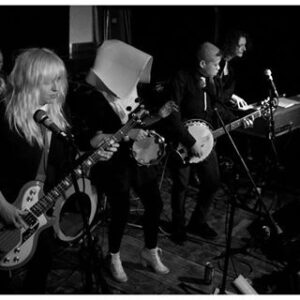 “Now don’t be using all your energy and having nothing left for The Fall,” warns Lolo, the vocalist and ringmaster of Ye Nuns’ beautiful, dedicated rage.

Dear Diary: too late: peaked, just after the song Boys Are Boys and Girls Are Choice,yeah, during Complication: People will for you/People run/Ain’t it fun for you/People go/To their deaths for you, originally a protest song about sending American troops to Vietnam, written by a bunch of GI’s, based in Germany back in the Sixties, calling themselves The Monks, Now, it’s eerily poignant because today the recalled House of Commons voted to allow British jets to join attacks by the US-led coalition against Isis strongholds in Iraq. Shut up/Don’t Cry/Shut Up (Shut Up), the connection, fear, dread and fury is not lost on Ye Nun’s.

You can’t call Ye Nuns a cover or tribute band, to me that’s unacceptable. That would be like saying The Fall tonight are about nostalgia instead of the NOW. But all Ye Nuns songs come from the Monks repertoire, a cult garage rock outfit (1965-1967); tunes crazy with the tension required to keep a balance between rage and a love of making groovy music. (Kennedy first sent troops in 1965. They had a list putting family and married men first, thus a rush to the alter.)

The Monks used the band as an angry mouthpiece and a blessed release, a precarious and desirable combination, and the reason behind Ye Nuns forming; all recognised musicians and artists from the indie world, with a mutual love of The Monks and an equal ego policy. Tonight, as the first band to kick off at 8pm, they bring a packed and diverse audience: gays, trans, upside-down and inside-out thinkers, all doers, musicians, writers, artists and lovers of life, angry, altruistic characters. To their credit, The Fall’s middle aged male fans seem not the slightest bit phased, appreciating the early start to emotional and mental hedonism and … join in. It’s a cunning plan, this billing, by Brighton’s Riot Not Diets promotions. It’s been a while since independent promoter made good, in London. Ye Nuns raised the power and raised the bar, Ye Nuns serve every note fresh, inspired, urgent and excitable. Not one stich dropped. (And Mark E Smith embraced the challenge, taking things to the next level.)

“This is all going rather well isn’t it?” perks up Debbie Smith, guitar/banjo/backing vocals.

Every single one of the seven members absolutely, completely take their moment – we get the full set tonight because supporting The Fall, a band they have been compared to on more than one occasion, is important to them. John Peel loved The Fall and he also supported all these artists, in his time. (Hopefully, it’s safe referencing him, sure that he won’t turn out to have been a predator as well.)

Next up, Ravioli Me Away, who thought too much about their outfits tonight and not enough about the POW! in their art pop punk. There’s a taster with Cat Call, the on stage rhythm-led set-up is similar to Swedish duo Volkano, at its best, reminiscent of Sidi Bou Said (Mel is in the audience, we are not worthy,) and The Slits. The massive foam hats? Perhaps a comment on the current pop star inclination for designer head gear, who knows? It clearly seemed a good idea to them at the time. Not surprised they work with sponge, a fascinating invention (they are always fascinated), but they are also sponges, putting it out there, with the confidence to do so without hesitation, encouraging each other, winking at the world. They may deny it but every one of Ye Nuns has probably been in a band like RMA.

A conversation heard on the floor by two twenty year olds: I wish Ravioli Me Away were supporting Fat White Family. The other replied: But by then, they would be supporting RMA, and they would be like… Ye Nuns! Diarist winces. Makes polite exit.

Ravioli Me Away eponymous debut album is out now on Good Job Records.