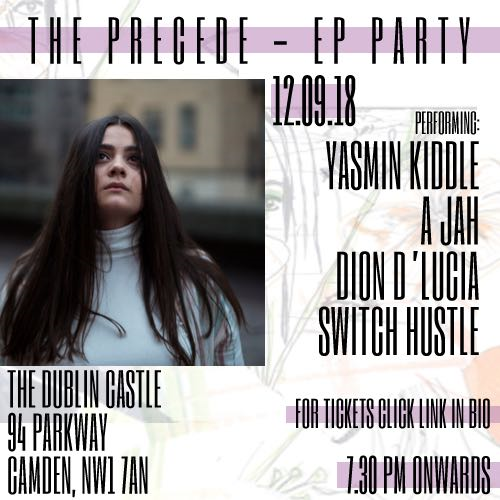 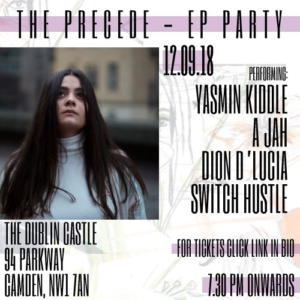 New solo artist Yasmin Kiddle will be performing at The Dublin Castle in Camden Town on the 12th of September 2018, to celebrate the release of her debut EP The Precede. Performing both song’s from the EP and new exclusive music Yasmin will ensure to blow you away with her soulful voice and melodic song writing. Matt Mead caught up with collaborator Steve Cradock to talk about Yasmin for Louder Than War.

Yasmin Kiddle is a singer/songwriter from North London with Greek Cypriot roots. At the age of only 7 she mastered guitar and piano as well as learning to play bass and drums. Not long after, she found her passion for song writing. Since then she has been continuously performing, both solo (accompanied with her guitar) and with bands. Yasmin went on to study performance and tech at college – this is where Yasmin learnt to produce her own songs and began recording her own music in a makeshift bedroom studio.

After wowing punters busking and at open mic nights in Camden, Yasmin was introduced to Steve Cradock (Ocean Colour Scene & Paul Weller band). Instantly upon hearing her ability on guitar and strength of her voice, Steve invited her to his own personal studio. Never failing to impress with her natural aptness for song writing, work ethic and raw talent – they have been collaborating ever since

With a DJ set from Switch Hustle (co producers of Black Hearts) and performances from rappers Dion D’Lucia and A Jah, it is sure to be an entertaining showcase of young British talent.

LTW: When did you first hear about Yasmin?

Steve: I heard about her through my Wife’s God son, Bart O’Sullivan, just that a friend of his was the most beautiful singer.

What did you like from what you heard about Yasmin?

Did Yasmin have all of her own material when you first met?

Yas is a songwriter so yes, the first time we met she had a lot of demo’s/ideas. It was all over the place and all in one place at the same time.

Did you help Yasmin with any part of the her music including writing and arrangements?

I just set up a really nice vocal microphone plugged in and let her sing, like a Lark in my opinion. Yas told me that she demoed songs on her bed on her laptop, which isn’t unusual but I tried to let her just focus on what she is great at.

How did the collaboration come about?

The stars were aligned, Luck.

Did you record all of the forthcoming EP in your own studio?

No, a song called Closer was, I played drums/bass and piano, we were lucky enough to have Nickolaj Larson play Moog and Tim Young on trombone and Pablo Mendleson on trumpet, Yas played guitar and sang.We did quite a bit of work on Summer was Hard in my Kundalini Studio , Take me out and Blackhearts were both done by Yas and her London crew.

Was the recording process quite long? How long did you spend in the studio together?

The recording process with Yas is such a joy, she works quickly, early start/late finished, a true professional. She is funny while being very serious, a very talented piano player who doesn’t know what chords she’s playing, the best new singer I have heard in years, a one off. A 10. Haha

Will you be going on tour with Yasmin?

I haven’t been asked.

Will we see further collaborations with yourself and Yasmin?

She has enough songs for a truly knock out long player , hopefully I’ll be producing it . Or making the tea!