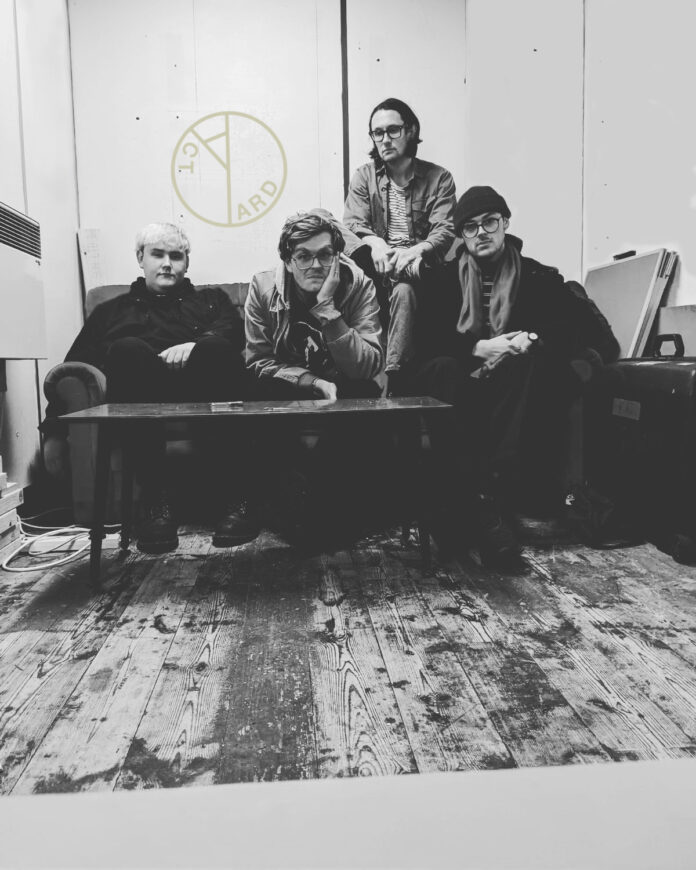 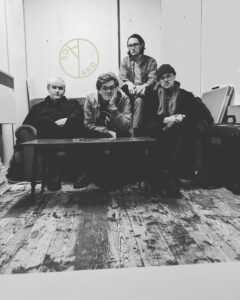 It’s hilarious but it’s not ”ha-ha’’ funny, more like ”oh fuck’’. The existential fears which often come with too much wonderment lead to the intense hilarity of everything and everyone. Yard Act from Leeds takes the piss but they do so with a certain poise and poignancy and precision that it feels acute and absolute and always point. A band composed of other bands, now composed of James Smith (vocals), Ryan Needham (bass), Sammy Robinson (guitars), and George Townend (drums), unveil the face of their new single called Fixer Upper. Anything but minimal.

It turns the skin to liquid with each rhythmic kick, an unloading of the toolbox to reveal, and record, a cobble of nuts and bolts, and collision of pots and pans to drive the narrative forward. A boiling hot bass bouncing against walls, the endlessly explosive inflections of stretched sound effects burrow vortexes into the ceiling’s center or someone else’s floor if you think about it multidimensionally.

The satirical stab, a wire on fire, shot from a spiraling, simplistic guitar line like placing a pair of tweezers to the splinter in one’s fingertip, suddenly appears then disappears once more then creeps up again. An entire sheet of details read aloud, about an amalgamation of personalities we have all, in one way or another, come into contact with. In this case, Graeme is the model of a man so firmly affixed to his own era that everything which came before or comes after it is a waste of time. The apexes have been achieved, the country he has come to be encased in, a cup of tea cures cancer, a pint erases the memories of yesterday, and the very generation he has come to call his own were, and always will be, the pinnacle of human existence.

But let’s not get mad at poor, old Graeme. He was in the social clubs before they became cool. For working men. For office warriors. For cosmic fine art types. Such sentiments are delivered here with impeccable timing and impressive one-liners to really captivate the imagination and deliver the impressions of this myopic, mythic creature. Able to convey the stench and stare of that fictitious phantasm in the corners of one’s memories, of the streets we grazed our knees upon in order to grow up.

The B-side released a few months back is equally as exciting. The Trapper’s Pelts puts a bass groove to good use with its thick, fuzzy footwork, throwing a lynch over the neck of each piece of the drumkit and pulling them behind it. All the while, glassy, woozy guitars seem to hypnotize the senses, capable of changing temperatures when channeling the ghost of Mark Smith or Sean Ryder or David Byrne and smashing and shattering apart with a fantastical melodicism, mechanistic and computerized and acidic all the same.

The conduit of these features emerges from our very own Smith, his stream of consciousness vocals are forthright and confrontational, frozen in a dystopian moment in the modern core, perched upon one’s nose, dangling one’s feet over the edge as a flood of juicy cut up words, grammatically incorrect but creatively, conceptually, look and sound superb, get along swimmingly. With each toss and turn of erratic punk electricity and caustic, ecstatic post neuroticism, and leaves us in a heap, The rawness of the droll really emerges with each snap of energy and unabated, anecdotal snarl. Part Cabaret Voltaire and part Comsat Angels. Part Crass and part Slits. Part Fall and Part Fugazi. Part Swans and Part Shellac. Part Not wanting each intense, intricate stanza slotted against each other, like ”sticky fingers on sugar glass” and ”trap music blaring from his furry boombox” to be lost due to too much reverb drench.

Injecting further maniacal spikes into one’s nervous system like a double dose of barbiturates to combat the modern headache we all wake up with, Yard Act will do just fine when fighting alongside the handful of other post punk groups with a good bass player and a good lyricist in their arsenal. More is boring. Less is everything. And they are making a lot of fucking good noise, with the latter.