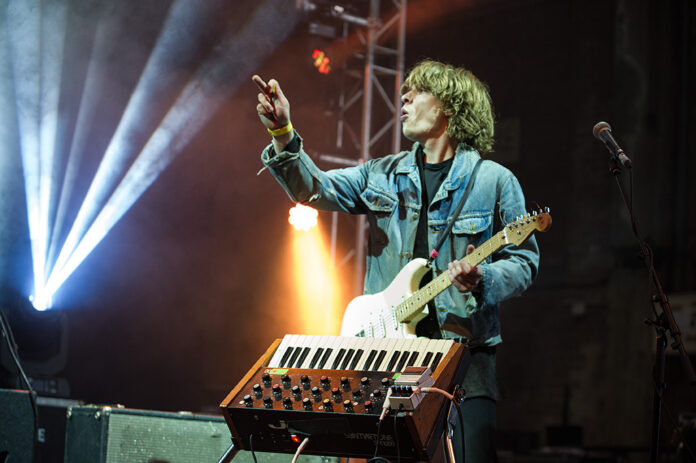 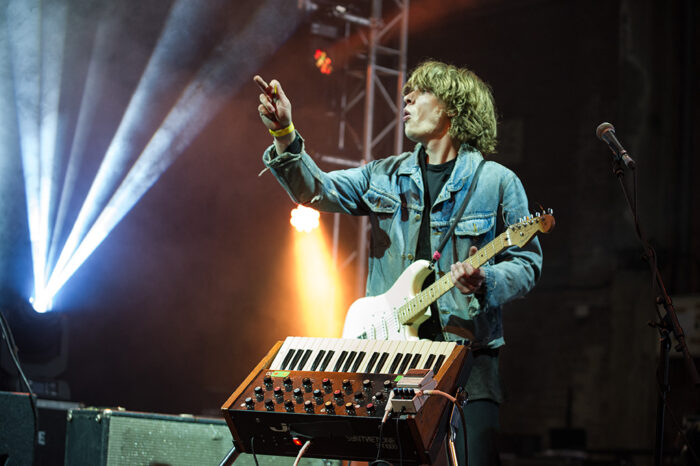 With the release of the No EP on the 13th of November on Jack White’s Third Man Records and a headline tour taking them across the UK and into Europe, Yak are one of the hottest bands of the moment. With a reputation for energy-packed performances often ending in severe brutality directed towards their instruments, their high octane performances are beautifully chaotic. I unexpectedly got the chance to chat with band before they went on stage at The Magnet in Liverpool. This is how it went:

Louder Than War: I’d just like to start by saying I saw you at The Haunt at The Great Escape festival and I thought your set was superb.

Oli Burslem: Oh yeah? I was ill, though…

Well the set was still great! I’ve been a real fan since then. The No EP has just been released. How has everything been panning out?

Oli Burslem: It’s been well received and we’ve had some good reviews. It was really great to be recording with Steve Mackey on Jack White’s label. Amazing to work with them.

That must have been brilliant

I got the No EP yesterday and managed to smash my Ipod today, so please forgive me if I’m not as well acquainted with the tracks as I would normally be. What I’ve heard I’ve loved.

Brilliant! I’m really looking forward to it. When I saw you at The Haunt you played the whole set without stopping.

Andy Jones: Yeah, we generally bring together around 5 songs…

Oli Burslem: It’s good to keep up the momentum rather than building it up then having to start from scratch again.

I saw you support Peace recently where you broke between every song and I think you’re right. It flows better when you bring the songs together.

Andy Jones: I’m in charge of leading the music.

Andy Jones: Tonight I am, yeah.

You’re half way through the tour. How’s that been?

You’ve got a bit of a trek ahead of you, then…

Oli Burslem: We’ve still got people in Wolverhampton, so we’ll stop off there. Bristol is a good place, though. I really like it.

Yes, I’ve always thought it was a good city. How are you finding sunny Liverpool? We’re having a lot of trouble with venues closing in the city. The Magnet is one of the better small ones still open. I don’t know if you’re having the same problem where you are…

At this point Elliot starts nodding his head to a cool 1950s track that has begun playing in the bar. The band laugh, and Oli says ‘Very fitting’ (The Magnet retains its original 1950s decor) 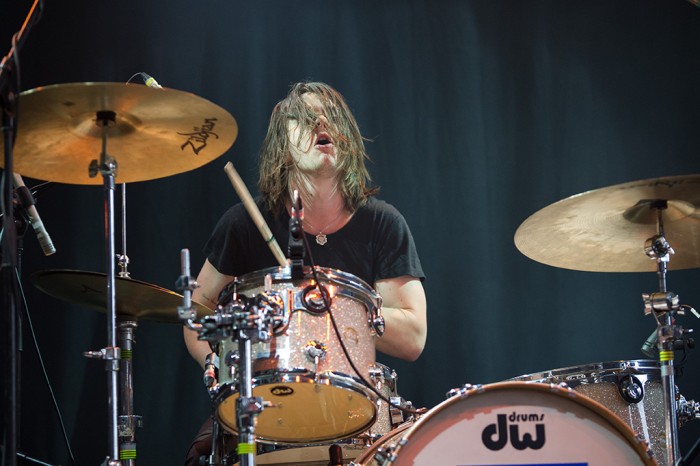 Oli Burslem: The venues are closing because?

It’s mostly because of re-development here. The Kazimier is being knocked down to make space for more flats.

Oli Burslem: I’m a bit old fashioned. I like places that are a bit rougher, a bit more run down.

I agree. I have to go to Manchester sometimes to get my fix of grimy city life now. Liverpool’s becoming very gentrified.

Oli Burslem: I knew a guy who liked it better here in the past when clubs like Eric’s were open.

Yeah, I was in Eric’s. The city was very different then, but everything was. You didn’t have easy access to music. You basically listened to what your older brothers had when you were kids.

Elliot Rawson: I was told it took so long for the music from the UK to reach New Zealand and to become an influence, they were still playing 1977 punk in 1979.

Sounds about right! Access to music is unbelievably better now. Thank you for taking the time to come and speak to me. It’s been a real pleasure to catch up with you.

This interview has been condensed and re-structured from a wider conversation but remains true to the original content.

Yak are on tour as we speak:

The No EP is out on Third Man Records and is available now from iTunes and record stores.

Interview conducted by Roxy Gillespie. More writing on Louder Than War can be found at her author’s archive. She Tweets as @RoxyG100.

Yak photos taken at Sound City 2015 by Melanie Smith. More work by Mel on Louder Than War can be found at her author’s archive. You can find her on Facebook and Twitter. Photography portfolio can be found here: mudkissphotography.co.uk.