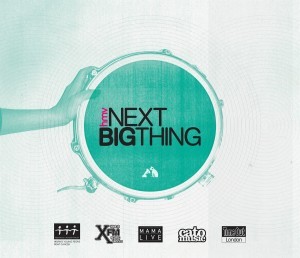 Sooooo they have an XFM in Manchester now? It turns out they’re not exempt from the clamour to find the UK’s Next Big Thing (I capitalised this sarcastically, only to realise XFM already did it). Lucy Holt went along to see if any of their New The Smiths were actually even close to that. Here’s what she thought.

There’s something about this time of year that instils vast sections of the population with a Nostradamus complex, whereby everyone from The Beeb to your postman attempts to predict who will be the year’s musical successes. XFM hedged their bets by throwing multiple hats into the ring at the HMV Ritz last Wednesday night, as well as crowning their Album of 2011 live on air.

XFM’s new music hound John Kennedy – in perhaps the biggest non-shocker of the year – awarded The Vaccines with the XFM New Music Award for their debut What Did You Expect From The Vaccines?: an album title that simultaneously acknowledges the media hype stupidity and gets all Nostradamus itself by cockily predicting its own success.

With similar self-assured confidence, Willy Moon performed first; sliding on stage in a slick white suit looking like an extra from Mad Men. He was accompanied by a suspiciously record-company-contrived-looking backing band possibly featuring Megan Fox’s French cousin. The New Zealander screeched and ahuh-ed his way through the set, unperturbed by incessant sound problems. The adrenaline pumped soul fell a little flat on the Manchester audience, who could have really done with subtitles to decipher his unintelligible mumbles and Elvis-isms, complete with high-kicks and wiggles. Musically, he matched up to his image, with retro rattling rock and roll and energetic screeching vocals.

From a little closer to home but maintaining the aesthetic sophistication, Ren Harvieu sauntered on to stage looking like a 1950s pin up from a Roy Lichtenstein painting. The illusion was barely shattered by the crutch she was walking with (the remains of a broken back that postponed her musical career), the can of beer she was swigging, and the inescapably Mancunian accent which promptly disappeared when she sang. Ren was accompanied by a full band featuring double bass, flute and saxophone, but stole the show with her compelling stage presence. She sang melancholic and sinisterly intriguing songs that would have been just as brilliant without the orchestral backing. Ren howled her way through debut single ”ËœThrough The Night’, with an effortless air. If the impending album is full of songs she sang live, it promises to be a powerful and soulful collection of music. Louder Than War’s Josh Nicol interviewed Ren after her set and was equally impressed.

Next to take to the stage with the weight of expectation resting heavily on their well-suited shoulders was Spector, the latest victim/guinea pig of the music press hype machine. They follow The Vaccines winning formula by sounding like their more dapper and articulate younger brother. To be fair to Spector, luck really wasn’t on their side: more technological difficulties resulted in some heckling and the humiliating slow applause. A particularly interesting variation on the usual awkward stalling technique was a desperate plea for the audience to throw them a Blackberry charger. There’s a poignant social comment to be made somewhere from that last sentence.

Aside from technological difficulties, the music itself wasn’t exactly ground-breaking, yet it was hormone fuelled, hooky and ever so slightly impossible to dislike… despite everything you know you should think about an overly image conscious five piece of faux-ruffians. Current single ”ËœChevy Thunder’ took The Vaccines’ (quelle surprise) formula of young lust and nostalgia, but was mindlessly enjoyable nonetheless. And it’s a formula that won last year’s XFM New Music Award; so perhaps Spector are going by the “if it ain’t broke don’t fix it” principle. Set closer and perennial “chant along” song ”ËœNever Fade Away’ was almost a moment of euphoria, or perhaps I’m mistaking it for relief that they’d survived the set.

Playing next, with a lot less pretence and hair product, were folk dark horses Dry The River. They played twisted lullabies which choric vocals and were accompanied by violin, but shouldn’t be underestimated. Dry The River’s music had an unearthly feel that someone who is less wary of making socially jeopardising puns could christen Toegaze on account of the frontman’s lack of footwear. ”ËœWeights and Measures’ lured the audience into a false sense of security with a fairly innocent and beautifully haunting acoustic introduction, but set closer ‘Lion’s Den’ erupted into a crescendo of noise and vivid lights, burning colours on to the retinas of the audience. Combined with the musical distortion, the whole set had had a hallucinatory effect. Dry The River could easily be compared to the likes of Bombay Bicycle Club, or the Marlings and Mumfords of the nu-folk uprising, who have taken up considerable space on lists of musical hopes for the past few years, but they proved themselves to be a little more exciting than the average sedative folk outfit.

The headliners, and therefore apparently our greatest hope for musical salvation, were Stoke’s All The Young. Arguably they interpreted the brief as a resurrection of Last Decade’s Big Thing. They swaggered onto stage attempting to fill the vacuum of “proper guitar music” that doesn’t exist. Elements of all the usual suspects were present: Oasis, The Courteeners, The Libertines. It would be fair to classify them as pub rock, but I’d rather analyse them with a little more creativity than they put into their music. ”ËœThe First Time’ and ”ËœQuiet Night In’ were fairly enjoyable in a sounding vaguely familiar kind of way, but their attempts at anthemic stadium riffs fell flat. It’s 2012, why is music still cluttered up with frontmen who insist on wearing sunglasses inside? It’s about now that someone should make a comment about All The Young being the harbingers of the Mayan apocalypse; I just don’t want to take on that sort of responsibility. That’s not to say they didn’t get a good reaction, they probably did, I just didn’t hang around long enough to find out. If these are out brightest hopes for 2012, can I please opt out?

As much as they are a musical lifeline when in the wilderness; out of range of a digital radio and 6 Music, XFM should have done a Vaccines and stuck a question mark on the end of ”ËœNext Big Thing’. In Simon Cowell terms, the gig would have been the audition stage of Britain’s Got Talent, a couple of standout acts and a few joke cards thrown in to make good viewing. I might not be as qualified as the XFM listening electorate and their cabinet of music experts to back a winning horse for 2012, but I’d vote for the captivating Ren Harvieu. With the recovery from spine injury, she’s even got the necessary tragic back-story. And what did we learn from the night? In 2012 the best new musicians will be extremely well dressed, sing about unrequited love, mostly sound quite a bit like The Vaccines, and in the case of All The Young, will be playing down your local pub by 2013. Anyone else feeling a bit of dÃƒÂ©jÃƒÂ  vu?