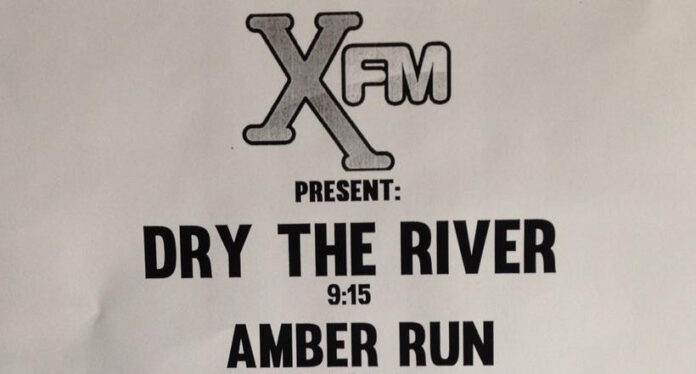 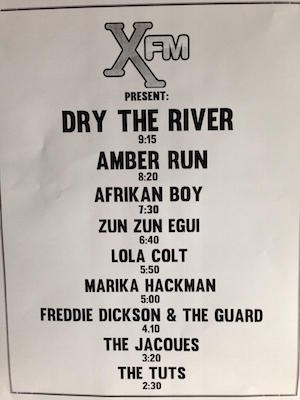 XFM’s first all dayer of the year took place at Camden’s Barfly, with a line-up boasting a host of established and up-and-coming acts. Louder Than War’s Keith Goldhanger was there.

One of the most impressive things about these XFM all dayers at the Barfly in Camden, North London isn’t just the line up we’re treated to on an annual basis but the seamless, almost unnoticed tranformation that the stage goes through in between each artist.

Nine bands, each with varying amounts of gear, all sounding as though they’ve been setting up for four hours, all as slick, polished and without any indication of stress all day and all in front of a very busy (sold out) audience of radio listening, music loving people.

We’d be here to do it again tomorrow if we had the chance as it’s like being at one of our favourite summer festivals but without any walking around, over powering sunshine or rain to worry about.

It’s two thirty on the dot and we witness not for the first time in our lives THE TUTS who play some of the best (pop) punk rock songs on the planet at the moment. This is the band some of us want to wave in front of peoples faces who still carry the flag for all the ageing punk rock bands that are still doing the rounds and charging huge amounts of money based on past glories. As it is with todays saturated music world one has to say that if this band were around thirty years ago when there wasn’t a new beat combo forming on every street corner (College bar or school playground) then people would be queuing up to put this young trio on every stage in every city and plaster them on every front cover glossy magazine you could cram on a newsagents shelf. Maybe one day this’ll still happen. They’ve the tunes, the energy and the enthusiasm already and a forthcoming support with The Selector to elevate themselves further towards national recognition. A shoe in for headlining this event in 2017 ? – Possibly.

THE JACQUES meanwhile are even younger that The Tuts one assumes without asking for a birth certificate. In fact they look and sound about eight years old and they are very much like The Libertines in both the way they sound and perform. It’s not even four PM and their guitarist is crowd surfing above the enthusiastic arrivals, some already on their second pint. It’s easy to point a finger of criticism at these young boys but they carry this off effortlessly and with mouth watering results that makes one wonder what they’ll be like in a few years time once they’ve convinced us they’ve been drinking in a few more influences than the one mentioned.

FREDDIE DICKSON AND THE GUARD are one of those artists that have a stage full of gear and a huge sound that is a joy to witness. This guys soulful voice can probably be heard down the road in the market as he belts out quality tune after tune. He’s one of those artists we enjoy seeing at these events that we just know we’ll follow up and include in our early Sunday morning listening habits in weeks to come. A real good find and already a stack of tunes available at the click of a button ready for us all to fall in love to. 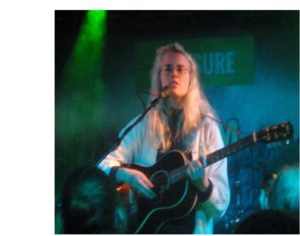 MARIKA HACKMAN (pic Keith Goldhanger) arrives with just an acoustic guitar and plays majestically to a respectable silent audience who, over previous years at this stage of the day have let themselves down by deciding this is the part of the day to start unrelated conversations and dismiss what is going on up on the Barfly stage. None of that today as we get to hear every note, every word and every tap on the side of her instrument and she glides us through half a dozen tunes effortless.
LOLA COLT look good and sound good but don’t have many tunes that make us want to punch the air, dance stupidly or sing along to. There’s a voice that reminds us of Siouxsie Sioux and some gliding throbbing bass lines with layer upon layer of guitar and percussion added that allow each tune to build and keep us interested but once each tune starts we realise by about the third song that this is as far as anything is going for the next four minutes. Good for those Nick Cave fans who want to see and hear something a bit psychedelic that doesn’t actually have a voice that actually sounds like the Australian but a band we feel are worth checking out in the comfort of our living rooms once we get hold of their album to listen too whilst cooking the Sunday dinner.

ZUN ZUN EGUI have briefly transformed the room into a field in Castle Donnington which wrong foots us slightly before making us realise we’re probably in a field more akin to WOMAD all in the space of half an hour. Heavy percussive tunes with chopping guitars that twist and turn at break neck speed are a joy to hear and turn a few heads as they plough through half a dozen tunes without pausing for a breather.

AFRIKAN BOY belt out “Y.A.M” and “LIDL” either side of “Who stole your visa”, “Mr Kunta Kinte” and “Made in Africa….” from the brilliant ABCD album. They’re loud and proud and blowing this place apart as they take charge of the room from the moment they appear and will be there to entertain us during the summer festivals one imagines.
AMBER RUN have the tunes that a nation is surely now ready to swoon over in their droves. Loud anthemic tunes suited for large venues fill the packed room as they tease us with songs from the anticipated debut album. A glorious performance featuring some glorious songs that’ll have people singing along to in time to come. Opener “I Found” is an anthem just waiting for the stadiums and closing with “Noah” suddenly makes us realise we’ve a huge band that many are going to adore in months to come. We suspected they were capable of this the moment we caught a glimpse of them last summer at Standon Calling ( https://louderthanwar.com/standon-calling-festival-2014-standon-hertfordshire-live-review/ ) and seeing them in a room full of enthusiastic punters really is a joy to behold.

The short day ends in the company of one of the biggest bands seen on this Barfly Stage for a while, DRY THE RIVER – No inbetween song banter as they throw us their glorious tunes from their first two albums that still sound as fresh and wonderful as the first time we heard them. This is a special band we see before us and hearing “Weights and Measures” in the setting of a tiny packed venue is a superb way to end the day that have seen many of us not move much further than between the bar and stage all day.

Anyone got any Crisps?