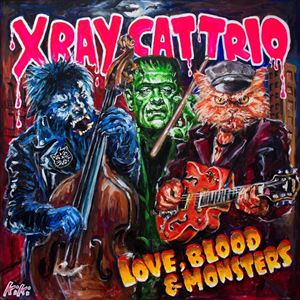 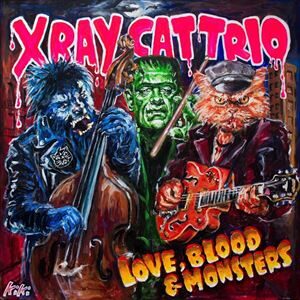 Leeds’ favourite surf punks, X Ray Cat Trio are back with another slab of dirty trashy rock ‘n’ roll; the follow up to their late 2015 debut ‘Out For Blood’ and the more recent ‘I Lied’ EP which we described as “dark, jagged and will fuck you over with a smile”

Thankfully they seem to have taken that as a compliment!

“Love, Blood & Monsters” is a befitting title for a collection of songs that switch from graveyard blues howlers via mescaline induced psychedelic doo-wop to psychobilly grinding surf grooves. It’s a stunning set that literally encompasses every nuance from the birth of rock ‘n’ roll – opener ‘Terrordactyl’ (sic) is a brooding instrumental, complete with deathly howls that builds into an explosive Farfisa rage, play it loud enough and you will pick up some neat vocal harmonies deep in the mire; whilst ‘Morticia’ is clearly a forlorn lament over a Ramones sourced bobby-socks bopper but not without a sense of dark humour.

There is literally so much on offer, El Nico and his boys have plundered from the fetid waters of rocks least travelled streams, the tequila laced ‘Deathrace 2000’ that seems to glorify in the blood and splatter – yet even that will not prepare you for the warped high school croon of ‘When You Gonna Do It’ which has guest vocals courtesy of Harriet Hyde who previously fronted stoners Black Moth alongside El Nico.

Blink and you miss it ‘Goodnight Little Vampire’ – a 27 second Billy Childish stained wailing and a whooping stomper that precedes the break-up ‘Nina Noelle’ which is all sorrowful, except its X Ray Cat Trio so it’s like a Buckfast sponsored ‘Wicked Game’… should a video exist it would be shot in Hunslet as opposed to Hawaii and a certain Miss Christensen would be replaced by either San or Tray.

X Ray Cat Trio are essential a rockabilly band, drawing their influence from a genre many disregard as revivalist; “Love, Blood & Monsters” sees them effortlessly debunk that theory, they have acknowledged the Born Bad torch bearers, but with rich song writing, a healthy dose of self-belief and blood splashed vaudeville, are able to breathe new life into this particular old dog.

The album is being launched with a FREE hometown show at the Brudenell, Leeds on Thursday 5th March 2020