Chuck Dukowski formed WÜRM about 40 years ago. Back then, various musical tendencies just started shaping punk-rock in California. All of a sudden, Dukowski found himself in the center of this revolution. Their rehearsal-space called “Wurm-hole” became the place where all the punk-rockers used to hang out. And, later on, where Chuck met other co-founders of Black Flag – Keith Morris and Greg Ginn.

Four decades later, ORG Music put out the newest 7-inch of WÜRM – following the reissue of their debut, Exhumed, released in 2018. I got a chance to speak with Chuck Dukowski, about the recent single and songwriting, about first inspirations and Black Flag, about personal evolution and future plans. 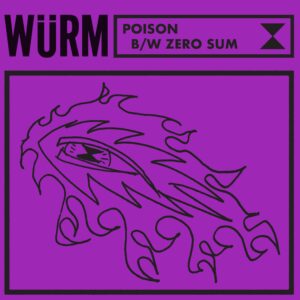 Recently, you presented the latest WÜRM single – first in nearly 40 years. How did everything come together with this ?

Compiling and releasing WÜRM’s EXHUMED retrospective in late 2018 got me reacquainted with WÜRM’s legacy, music and surviving members. I did a couple of Jams with WÜRM’s drummer Lou Hinzo and my friend Phil VanDuyne and they were great. After doing FLAG’s 2019 Punk Rock Bowling show, I decided to revisit WÜRM’s music and try putting together a WÜRM 2020 band with Lou and me as the base. I asked Phil to be part of it and I called German to see if he was interested in singing. German is a guitarist but I thought he might be an interesting singer if he was interested in trying vocals. (I’d had good luck with a guitarist as a vocalist with Dez in Black Flag.) That all worked out well and after we’d learned a set of WÜRM’s classics with the 2020 band I tried out a couple of my more recent songs with the group. They liked the songs and the music came together quickly so we decided to record and release them for a WÜRM 2020 update. We recorded with Dave Jones [Bags, Magnolia Thunderpussy, Carnage Asada bassist] at the controls at Josh Landau’s [of Venice skate-metal rockers the SHRINE] Eliminator Studio. Dave and I mixed at his Wasatch/Mar Vista Recording annex. Dave contributed his considerable engineering and production skills/ talent to the project and two days later we were done.

A few months prior the release, you told me about the decision to re-form WURM – when did you got this idea and was it hard for you to keep that kind of energetics you had within the new members ?

The energy and vibe are good. We were really just getting going when the COVID pandemic shut us and most everything else down.

Listening to various projects/bands you’ve been a part of during the last few years – FLAG, Chuck Dukowski’s Sextet and in the end, this newest WURM single. Being a musician you always keen to put a certain type of tension in what you’re writing. How do you see your main goal while writing and recording ?

Poison just came to me one day a few years ago. I picked up a guitar and jammed it out to iron out any wrinkles and make sure I remembered it. Zero Sum came in separate parts. First the music and a while later I combined the music with the lyric, which had been running around in my head for a little while.

I come up with songs all sorts of ways. I play all the time and music and lyrical ideas come to me all the time. I remember some of it and make songs from it. That can all take a minute and a sometimes a bit of effort. I’m not sure about the “tension” you’re talking about. I just go for the feel that is “right”. I think mostly in terms of emotion and flow with things leading to the next and the music’s emotional tone feeding the lyrical ideas. 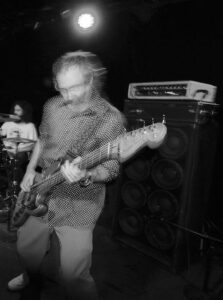 When did you really started writing songs ?

I started writing songs right off when I started learning to play bass. They’ve always gone together for me. Each combination of musicians has a different spirit and that affects the music I create with them.

If we speak about your career in late 70’s – how do you remember that period of time and musical scene in California at that point ?

I wouldn’t call it a “career” when I started in but in ’71 when I picked up the bass a lot of exciting music was happening. Led Zeppelin, Black Sabbath, Yes, Deep Purple, King Crimson, Humble Pie, Spirit, Neal Young, Moody Blues, Rolling Stones, Sly and the Family Stone, Mountain, Alice Cooper, Deep Purple, Allman Brothers among many others were all new and active. I still love that great music.

When did you decide to take a your well-known pseudonym ?

One hungry morning at the WÜRM-HOLE while I was looking for loose change lost in our couches by the previous night’s parties I found a zippo engraved with Chuck The Duke in one of our couches. I started to toy with being Chuck The Duke from time to time after that. When it really took hold was when I was booking BLACK FLAG’s first tours in 1980. I used Chuck Dukowski as my agent “Nom De Guerre” in an attempt to appear as if BLACK FLAG had an actual agent and pretty soon I just became Chuck Dukowski. 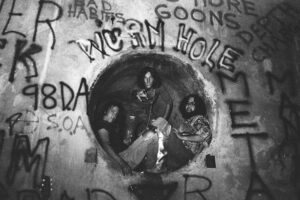 Back in the days, when you started WÜRM, was it hard for you, personally to find your sound, your vibes and the way out for the things you, as musician, wanted to express ?

The ideas have always been there. I’m lucky that way. Developing the skills and contexts to recognise and manifest them is an ongoing process. It took a little while to develop some confidence with it all.

And are there any elements, structures or tonalities attract you musically ? Something you like to work with ?

That’s an ongoing evolution. I like to work with feelings and sounds that evoke feelings for me. I keep developing different skills and musical interests that then drive what do artistically into new directions.

While writing a song, do you always have an idea how it should sound like or is it a bit of trial and error as well ?

I’ve found there are a lot of roads to a song. Sometimes something I play just cool sounds  and I repeat it and work with it. Other times I hear something in my head and seek to manifest it. Sometimes I try to hit a feel or try a new combination and after a bit I come away with something I like. In general, I feel it is important to always be open to something new/different even when I already have an idea what something should sound like at the start. I think that openness is especially important to me in working with other players so as not to let a pre-conceived vision block something great and unexpected from happening. When I bring my ideas to a band, I don’t tell the other players what they should play. I ask them to play what they hear along with my parts. I think it usually helps the final product be more unique and emotionally and creatively richer. It also helps the other players to be engaged and creatively generous collaborators. 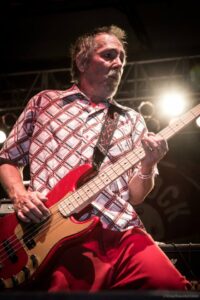 And as for the lyrics, again, there’s always a certain tension and struggle with everything you’ve been writing. To this day, do you feel yourself like a rebel ? Or these are just your emotions ?

I feel like both are the same for me. For me to write a song I need to have a strong feeling or compelling idea. Then I pick up a pen. Yeah, I’ve always felt like I’m a bit of a rebel and yes, they are my emotions.

What inspires you these days ?

Lots of things always. Lately stuff’s been so messed up. The anger, joy, empathy and frustration I feel are intense these days. It’s kind-a rough because I’m having a tough time manifesting from it all somehow.

What are your future plans with WÜRM ? A full-length album ?

That would be cool. Everything is in flux because of the horror’s playing out in our world. I have not even seen the other WÜRM 2020 band members since March 2020. We are all excited now about the release of our POISON b/w ZERO SUM seven inch. We’re talking about remote recording. Something will happen and this horror show we’re all living through will eventually wind down. Then we will all be able to actually get on with things. Will it be the same? Probably not. Will it happen all at once or quickly? Probably not. Will new jams happen? Definitely.