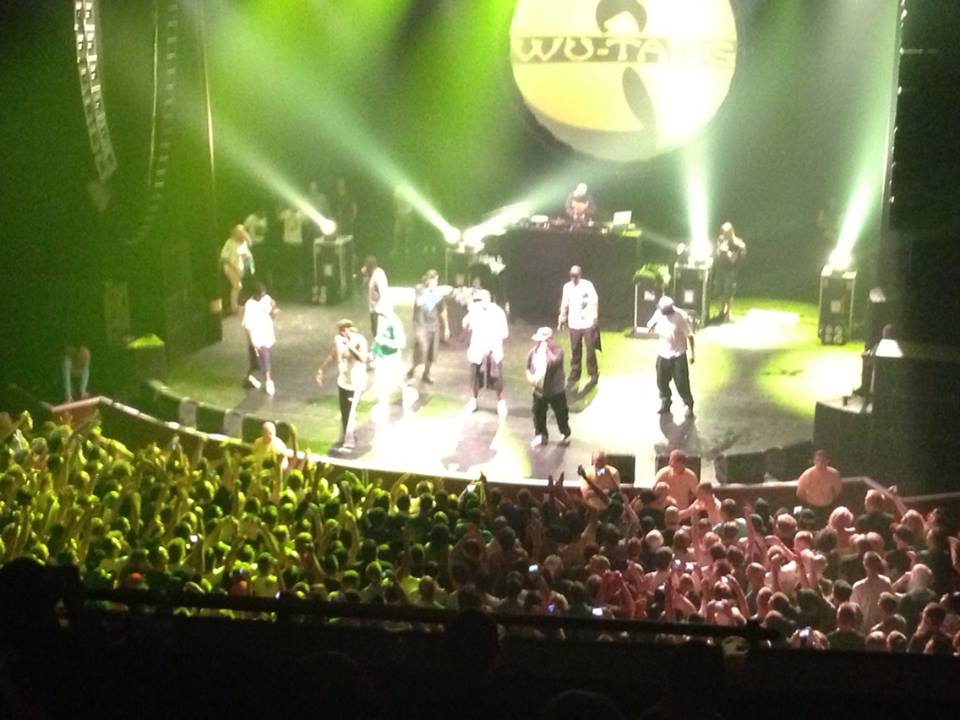 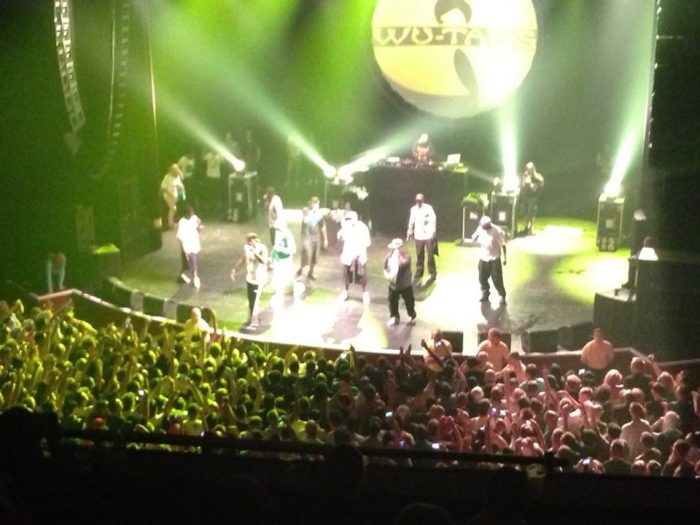 Celebrating their 20th year in the game & getting ready to promote their 6th studio album (A Better Tomorrow) The Wu-Tang Clan (RIP ODB) landed in Manchester last Thursday to rock the Apollo the only way they know how…playing classics such as ‘Protect Ya Neck’ , ‘Triumph’, ‘Shame on a Nigga’ and Raekwon’s summer anthem ‘Ice cream’ as well as the groups special O’l Dirty Bastard medley. The night kind of had the feel of a celebration, like paying homage to one of the greatest hip-hop set lists ever.

Buzzing at not just hearing these 90’s rap classics but also at the thought of going to see the Wu’s 9 man team in full felt like something really special. Especially as the previously billed ‘Wu Tang’ tours of 2010 and 2011 failed to bring all the members together, missing key figures like Method Man and RZA. In fact, it was the one they call ‘The Abbott’ and Wu Tang Clan leader RZA who initially brought the group together back in the late 80’s when some of the Wu Tang Clan were actually enemies and warring neighbours who came from opposing housing projects back home on Staten Island / NY. To bring them all to the table back then was some move on RZA’a part and so the actual sight of seeing The Wu Tang Clan come together once again in full mode / live on stage after all these years was always going to be a big deal to the groups legions of fans around the world. As it was with the hot and hyped up crowd of the Apollo who were being warmed up by a selection of Hip Hop classics from Snoop to Biggie.

The support for the night and first out on stage was Manchester’s own fire MC / battle rapper Shotty Horrah. Though only a real brief performance from the local lad he offered up some of that same energy and talent which has already made him a fave on the beat as well as a highly respected ‘world’ battle MC. As time ticked away though waiting for the Wu to enter the stage, thoughts went straight to their show a week prior in Germany, where the group turned up that late the promoter threatened to pull the groups $25,000 fee.

Though all was resolved then with the Wu Tang going on to play a reportedly great night, I did wonder that if they could be late for the stereotypically punctual / time obsessed ‘Gerries’ then it could quite easily happen tonight. But when Wu Tang member DJ Mathematics started to hype the crowd, asking if they were ready, you knew they’d arrived, you could feel it. As expected the first member out on stage was RZA which gave the signal for everyone to go mad, most big bands / artists are loved by their own fans but it’s one of those special relationship between The Wu Tang Clan and their fans, that same kinda relationship that bands like The Stone Roses or The Smiths have with their fans.

Kicking off with the familiar sound of the Wu’s show opener ‘Bring the Ruckus’, other members slowly filed out on stage in 1’s and 2’s. By the time you knew it U-God, Cappadonna, Raekwon, Inspector Deck and the whole crew were right in front of you and live on stage. So it was off into a classic Wu Tang set list which included tracks from both ’36 chambers’ and ‘Wu Tang Forever’, in which the sound, despite speaker problems here and there, still sounded pretty awesome as they pumped out that Wu Tang / RZA constructed beat.

Then, to turn things up even more, probably the most recognizable member of the group Method Man literally jumped on stage with that same crazy energy he’s been giving out since the Wu started. It was that sight of seeing them all on stage side by side again, bouncing and rhyming off each other while they ran out with The Wu’s hustlin’ anthem ‘Cream’, ‘The Mystery of Chessboxin’ and other Wu Tang hits which made the night more of an experience than just ‘another’ reunion gig. As well there were solo tracks from Wu Tang members like GZA’s classic ‘Liquid Swords’ and even some rare Wu Tang tracks added as the night went on.

Fan’s faves like ‘Gravel Pit’ and the early classic ‘Method Man’ track brought some of the biggest reactions of the night, sounding as tight and raw as they ever did. With another big moment of the performance being Old Dirty Bastard’s medley and tribute as the late rappers material still has the power to get the loudest reaction of all. Wonderfully working the Apollo crowd Method Man performed his usual stage dive into the mosh pit as well as his other on stage antics…and to say they’re all ‘getting on’ a bit now, especially Method Man, they can’t half move, busting some real slick stage moves while skirting across the floor from one end to another & climbing about the speakers while all the time inter-playing with the crowd. He’s without doubt still the main source of ‘live’ energy within the Wu.

If that wasn’t enough, DJ Mathematics put on his own show with some tricky turntable moves, like using his elbows to scratch and a whole load of other crazy DJ moves, it just made the crowd want more as they came to the end of their set. With the group leaving to well earned applause the Wu Tang Clan’s Manchester’s performance sent every Wu-fan home happy…in fact it seemed like a good night all round as RZA posted on his Twitter/Facebook later on after the gig:

At 40 quid a ticket it was a steep admission fee (and probably why the top half of the stall seats didn’t sell out even though it was actually the Wu Tang’s biggest Manchester show to date). But who else offers up a show like the Wu Tang Clan? They changed Hip Hop for ever in the mid 90’s and they are still here coming with the same vibe they broke out with. Comparing what they do to the so called ‘big’ Hip Hop acts of today they seem needed more than ever. Apart from the Apollo house speakers mis-firing and at times mic’s not being turned up enough the show lived up to what the Wu Tang Clan are all about.

It was fun, raw-energy and that special togetherness between fans and group that the Wu Tang have cultivated over the years with shows just like tonights was to the fore … so bring on the new album and hopefully a tour to go with it. Wu Tang Forever…

All words by Carl Stanley, pictures by Meaty. More of Carl’s writing on Louder Than War can be found in his author’s archive.