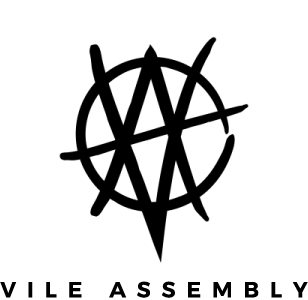 The ‘Propaganda’ video rages against mass media and the political elite that use news stories as a form of control.

Inspired by the barrage of misinformation, gossip, hearsay and out-and-out propaganda churned-out by some of the world’s leading tabloid and media sources, the latest from Vile Assembly is a stinging counter attack infuriated by the spin on Brexit, the criminal obsession with Nigel Farage, and the rabid promotion of a hatred of what is simply misunderstood.

“The media does not necessarily tell you directly how to behave, or what to think, its more subtle than that, the media does tell you what to think about, presenting narratives, stories they want to consume you in a way that channels your thinking….. Arguably, it’s the most powerful tool on planet earth which is why it’s so valuable, I suppose this is some of the thinking behind our song Propaganda (link to pre-save).”

As with each Vile Assembly video, ‘Propaganda’ has its own visual identity to reflect the strong narratives that underpin their work. Here the band’s hypnotic new video takes visual inspiration from the art-noir Robert Rodriguez film Sin City and the work of Gerald Scarfe. Inexpensively made and with a strong DIY ethic, the video was created in just half a day with frequent visual collaborator Will Hutchinson. Shot in Will’s flat in Portsmouth with a makeshift green screen, the video overlays a torrent of clippings from that day’s tabloid media upon focussed headshots of frontman Paul Mason. He reflects:

“We popped out to the newsagents and bought that morning’s vile offerings (bar The Sun as we’d never buy that piece of s**t), rolled up individual pages and used them as blindfolds. The idea being, the head will sing the lyrics to Propaganda whilst all this media generated miss information fly’s about, with the lyrics to the song representing how we’re manipulated by the media. We are blinded by Propaganda, the continuous barrage of headlines and hatred become the words we speak, repeating the message they want you to believe and repeat”.

‘Propaganda’ was written by Paul Mason with VA manager Keith Mullin. Believers in the effectiveness of visual imagery especially when combined with music, the pair see these components as being at the very core of the most persuasive propaganda. Looking to take the concept apart with their new single, Vile Assembly sought to create a strong visual companion as an imperative to make their own message as impactful as possible. As Paul says:

“The word “Propaganda”, it’s a marketer’s dream, it’s a well-researched form of control categorised as types, the modes used to convince an audience through selective facts and manipulation of a story to encourage a particular perception aiming to achieve an objective. Vile Assembly believe we’re way beyond that now, certain individuals, those aristocratic alliances learned a lot from the Nazis and how to make the most despicable and appalling abuses acceptable, its Propaganda on steroids. the ultimate tool of deceit and control…. Propaganda is the rhetoric of the worlds media and we have bought it like we did the war in Iraq, we can defeat Propaganda but it needs us to unite in our human collective understanding and fight back against the corporate elite who are robbing us of a life of love and freedom.”

Written after reading Noam Chomsky’s ‘Profit Over People’,‘Propaganda’ is Vile Assembly at their most vitriolic, attacking a political system that protects the elite whilst providing an illusion of democratic choice. A system that relies upon a comatose population enthralled by the latest iPhone and mesmerised by the latest episode of Love Island.

Smacking you in the face like the bastard child of PiL, the Bunnymen and Manic Street Preachers, and with lyrics scorched with the enraged political sensibilities of the latter to boot, ‘Propaganda’ is gloriously hard-hitting in every sense. Releasing ‘Propaganda’ on Friday September 27th, the latest from the Liverpool band is like manna from heaven, alternative facts and “truth isn’t truth”, it challenges the assumption that we are free and self-determining.