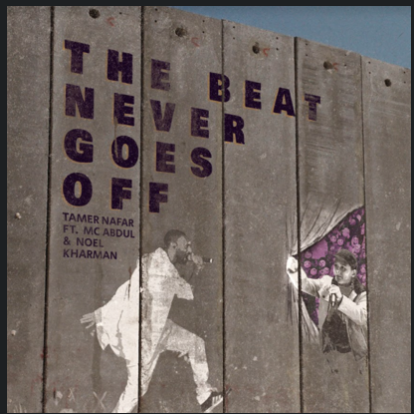 The track is accompanied by a gritty, exhilarating video by Palestinian director Micheal Zananiri that sees Tamer dropping bars with intensity, projected behind him is MC Abdul skillfully rapping from Gaza, with Noel Kharman making a stunning appearance to bless the tune with her glorious voice. The trio each have incredible stories and have between them have racked up over 120 million views globally.

The outcome is a banger with the energy and defiance of hip hop, against the backdrop of Palestine, with its lyrics “That was a tank attack, that was a gas attack. Never a heart attack. Because the beat never goes off”

Despite the troubles and struggles, ‘The Beat Never Goes Off’ demonstrates that hip hop is very much alive and well in Palestine.

Tamer Nafar has written and co-produced this exhilarating hip hop anthem that showcases his sick lyrical flow and beats. Tamer reached out to MC Abdul, a child MC who first went viral in the wake of Intifada when he was 9. With its energy and vibe, clever Western cultural references and humour, the track has already been reaching influential ears around the world, with support from high profile Palestinians such as DJ Khalid and Gigi Hadid.

Tamer Nafar is a pioneer of Arab hip-hop in the Middle East, the first Palestinian rapper and founder of the state’s original rap crew DAM, who rap in Arabic, Hebrew, and English. He explains “When I heard rap for the first time as a teen I knew my life would change. I got the same feeling when I heard the 9 year old MC Abdul rapping from Gaza. He made me grab the pen, write the song, record it and sending it to him asking for a feature. During the production I knew I wanted the amazing Noel Kharman to add a bit of her gentle Arabic vox. The result doesn’t even sound like we planned it.  It started it as a sad song, but the energy each individual brought just made us think that the Middle East isn’t only about death and wars, we’re still here… The Beat Never Goes Off.”

With young MC Abdul unable to leave Gaza, video director Michael Zananiri projected him onto a wall behind Tamer, he explains how he came up with the concept “It was a challenging video…how do we bring two artists on the same screen when they have walls between them? They live 30 minutes away from each other, but can’t meet, and the last thing I wanted was to do a split screen. This project is about unity and hip hop, so the best I could think of was to project Abdul on the wall near Tamer just to feel that music and videos can make us dream that we are bigger than walls.”