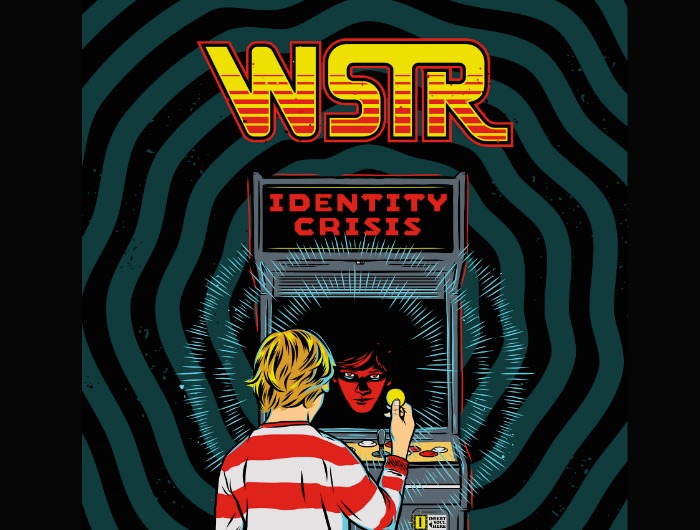 Formed in 2015 and inspired by American pop punk, the Liverpudlian quartet WSTR blended in some British derision into the formula for a slightly new take on the genre. The band signed with Hopeless Records and revealed they would be releasing their second studio album Identity Crisis, on 31 August  2018.

Liverpool’s WSTR released their debut Red Green Or In-between in a spin of extreme expectation and while it unquestionably hit that pop-punk spot it nevertheless left room for the band to develop. Just a year on and WSTR announced their sophomore album alongside the release of the first track from the album: Bad to The Bone. Bad To The Bone is a dynamically damn fine cut of peppy cynicism with lyrics that propagate a raised eyebrow of curiosity; “I got a backlog of drama that won’t let me breathe”.

Working again with producer, Seb Barlow (As It Is, Neck Deep), WSTR has once more focused on energy, soundbite lyrics and anthemic choruses. There are plenty of positives to champion the construction of the album including a well thought out flow to the tracks that works incredibly well. Opening with a cacophonic blast, Tell Me More, is a bouncy and melodious filled bundle of excitement that sucks you straight into the album. Maintaining the stimulation, Crisis, keeps the buoyancy in the melody while darkening the agitation, it is deliciously delightful and one of the strongest tracks on the album.

By the time we reach Promiscuous, there has been more than a trace of angsty raw lyricism, which smacks at times of sneering and anxious contempt, although it is hard to pinpoint clearly where these arrows of lyrical derision are aimed. There is a certain amount of nostalgic value to the middle of Identity Crisis. The Latest, Silly Me, Fling and Hide Everything Sharp, that will certainly appeal to established fans of both WSTR and well-produced pop-punk. They are also a perfect and cordial introduction to the band for those new to the group. Hide Everything Sharp, particularly, is an unpretentious, animated and charming track, that I find I’m going back to listen to again and again.

There is a requirement of all pop-punk albums to include a ballad, Identity Crisis, of course, follows the recipe. See You In Hell is no tug at the heartstrings or hit you in the feels fest. It comes across as a childish bitter fume rather than poignant narrative. Bringing little to the album, its presents feels prescribed and will be when the skip button gets used most when Identity Crisis is playing.

Ultimately the (almost) nonstop momentum and honest determination ultimately marks Identity Crisis as an engaging record despite the air of uncomfortableness the lyrics create, at times. However, it’s this sharpness that elevates it above Red Green Or Inbetween and makes WSTR intriguing. Their development of the pop-punk formula is limited although what progression there is proves interesting and authentic, rendering Identity Crisis a valuable advancement for WSTR and a decent addition to our playlists.

Identity Crisis will be available on August 31, 2018 via Hopeless Records, pre-orders are available now.

Album Review by Katie Clare. More news, articles and interviews by Katie on Louder Than War can be found at her Author Archive. Katie can also be found on Twitter where she tweets as @tokyo_katie.

Katie can also be found on Instagram as  tokyo_katie_captures her feed is devoted to captures from shows past and present.