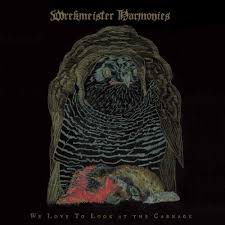 Wrekmeister Harmonies: We Love To Look At The Carnage

As yet another storm batters our shores and the weather keeps us locked in doors for yet another weekend, it is easy for us to slip in to the grey and maudlin. A spiritual malady smothering our spirits. Times like these demand a soundtrack. Something suitably swirling and cascading. We can chose to go headfirst in to the abyss of music that drags us down with it or we chose to be oh-so ironic and get the bubblegum on the stereo to lift us out of our moods ignoring the outside. There’s nothing to see here indeed. Personally I tend to gravitate towards the former and when I set about to write up this review I thought I was going to be writing about the heavy concepts and mood that hangs over the album only this time something weird happened. I have lived with this album for a while now and listening again today as I type this out I notice that this time the album is saying something different. It is actually lifting the spirits and injecting some lightness in to the day (I must also point out I am chock full with a head cold and when this happens I am best to be avoided as I am a right grumpy…..) We Love To Look At The Change is grand is scope and heavy with intent but its biggest quality is its beauty.

Over the last few releases the core duo JR and Esther have retreated slightly from their grand origins and looked towards making a sound that is more direct and emotional and it is on We Love To Look At The Change where that ideal is taken to its peak. Here is an album that deals in the deeper and shadowy areas of human existence with addiction and death popping up throughout the albums lyrics (all delivered in JR’s deep, Cave-like narrative style) but the music that serves as their bed is full of moments of brevity and beauty making it an album that can be melancholic for sure but ultimately life-affirming and joyous. Just follow Esther’s violin lines throughout the album that serve as gorgeous trails of thought lifting and scattering us around or the deeply textured electronic elements that provide a fuller sound one minute then disturbing chaos the next. Here is an album that is life itself with all its ugliness and beauty wrapped up in a well balanced shell constantly shifting yet always remaining true, addictive and concise. There is not a single second of flab on here and you never once get a feeling of being jarred out of sync by an unexpected shift in tone instead the whole piece flows wonderfully and reminds me of the work of Current 93 with the two bands sharing a style that at once feels ancient and historic yet present, needed and new.

One of the albums inspirations was Marcus Aurelius’ Meditations and the strength you can find in stoicism and this quality pervades every single second of music here in the way it gives you a puffed up chest and lifted chin in the face of yet another storm and the obvious signs that this weather is now the new normal. This is an extremely important and thrilling album that gives one the courage to get back in the fight, get inspired or even just to get out of bed. A big album with big themes played with such finesse and grace that it feels like one of those recordings that were made just for you..you may never have known you needed it but once heard you will never want to be far from it again.