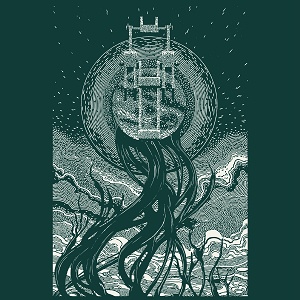 If there’s one thing that can be said about J.R. Robinson (aka Wrekmeister Harmonies) it’s that he’s a true original. On Then It All Came Down, his mammoth thirty-four minute extravaganza he manages to journey from folk with a Spanish twist to death metal with seemingly obvious ease like the two genres went hand in hand.

Last year’s long-form composition, You’ve Always Meant So Much To Me (review here) was also met with much interest here at Louder Than War and the new effort repeats the same inquisitiveness.

Said to explore the processes of decay and deterioration the album, Robinson begins the album as the consummate classical guitar player, plucking gentle strings over an ambient backdrop containing chimes and choirs singing ‘Beautiful Sun’ like the entrance to Heaven itself.

Following violins, more guitar work and the introduction of deeper male voices replacing female, the music takes a turn in the opposite direction and begins its dark fall from Nirvana to Hell.

Howls, distortion and screams takes over rapidly to fuzzed out guitars and slow percussion as if to indicate a death march itself. Voices cry and holler is seemingly overriding pain and the scene for the remainder of the track is set.

Gradually increasing in intensity and power, things heat up and gather momentum as the transformation from order to chaos is completed. Somehow managing to remain focussed and, let’s be frank, musical, Then It All Came Down (maybe a literal reference to the journey of the track) slowly ends its fall from grace.

Robinson is certainly a maverick. No compromise, no surrender, he performs with undoubted power and commitment which has to be celebrated, and for the second time he has produced a rather fascinating marathon of work.