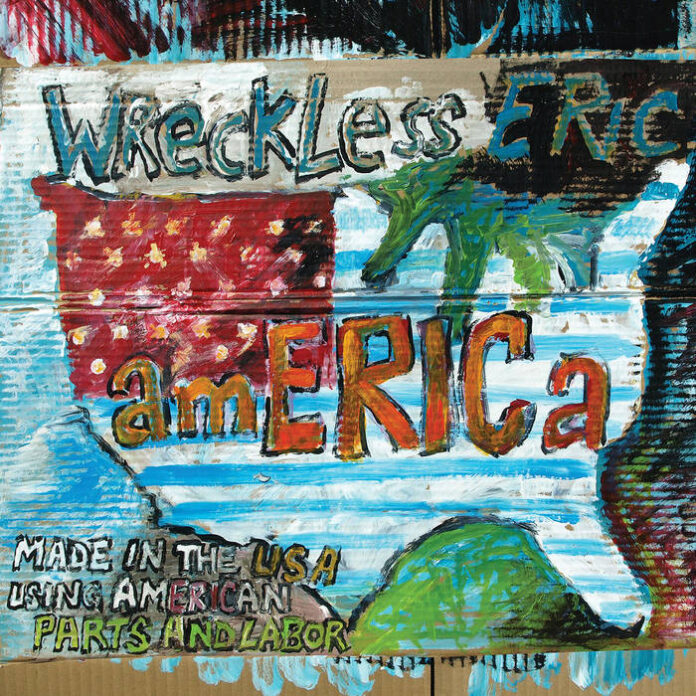 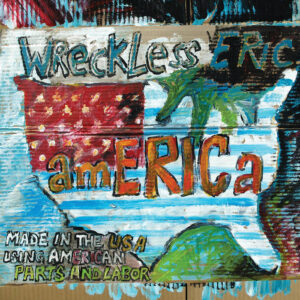 “Wreckless Eric is a hero to all those of us who love a good kitchen sink drama set to music. He takes the strangeness in the everyday and sets it to song. Like Ray Davies, Kevin Ayers and Ian Dury, he is a truly great British songwriter” –says Phil Alexander, editor in chief, MOJO magazine.  Yeah, he is, says Ged Babey, so why is Mojo usually full of such rubbish?

Wreckless Eric is on Fire! Literally.  Pitchfork have discovered the Wonderful World of Eric, giving him one of the best reviews he’s ever had.   As have Goldmine.  He described himself as a Living Museum in the past and once considered touring as Neckless Derek – a tribute to himself as it paid better. Instead of a potted history of the Erics career here’s a summing up of my personal relationship with his oeuvre. I was never a big fan of his disheveled pop in the Stiff days, I knew Whole Wide World obviously but it was no Another Girl, Another Planet was it?

Stiff Records was a label populated by oddball throwbacks for the most part , who made the odd great record.  The Damned were the only band that mattered on the label as far as I was concerned.  I found Elvis Costello annoying and Ian Dury was good for the swearing on New Boots  ( yes, I was young…)  Eric was just an also-ran in my juvenile opinion back then.

Twenty years on, I happened to hear the Hitsville House Band song The Girl With the Wanderin’ Eye on the radio.  I thought it was sheer genius, and bought the 12 O’ Clock Stereo album  ( reissued on Fire last year). It fitted in perfectly with the sort of music I was listening to then;  Gallon Drunk, Gretchen Hofner, Breed, thee Headcoats…

Eric cropped up again being interviewed and playing a mighty version of Joe Meek on Jonathan Ross’s radio show in 2002. I was so taken with his performance I made one of my rare trips up to the capital to see him play at the 12 Bar.  It remains one of the most powerful performances I’ve ever seen by anyone. I was practically reduced to tears.  The songs that were like emotional, hurricanes of autobiographical bitterness and desperation were Local,  Same. and 33’s and 45’s, later captured on the Bungalow Hi album . Eric wasn’t, it seemed, a happy man.  It was a cathartic, savage, one-man show. (Imagine the Book of Job re-written as songs by Tony Hancock and played by a one-man Velvet Underground !). I saw him again in Winchester a year or so later, he was still a thoroughly pissed off, cynical man, though he disguised it quite well with his caustic wit and dishevelled charm. He played another blinder and Stiff era songs like the Final Taxi impressed me no end.  So, he has always been a brilliant songwriter then?

The Len Bright Combo (Eric and some Milkshakes) reissue sealed my love for Eric. There two-albums on one CD is a favourite play-loud-when-pissed-off selection. In one of his songs Eric sang of desperately needing  his “Continuity Girl” to stop his life being a cycle of despair and misery without someone to keep him together… its a heartbreaking song.

Luckily Eric met, fell in love with and married the wonderful Amy Rigby; the change in him was astounding. He became a new man: relaxed, almost cheerful and happy-go-lucky.  Well, a contented curmudgeon at least.  They make a great musical team too and so after two superb homespun albums together (Two Way Family Favourites and a Working Museum) Eric is back as a solo artist for this album at least.

So this is the Space Age.

Like any of us growing up in the Sixties we imagined we’d all have jetpacks by 2015 and Eric sums up our post-millennial disappointment perfectly in that line.

“amERICa” is probably more about Eric than the actual country itself, but does have his keen observational eye for peculiar detail captured in a nice turn of phrase.  A bumper sticker reads “Gun Control means two hands on the rifle.  And apparently ” White Bread built this Land of Milk and Money”.  Erics’ America is the home of “Chuck Berry, the Velvet Underground, Jimmy Reed and the Beach Boys” as he wistfully sings a shopping list of his heroes.

Days of my Life threatens to turn into Ray Davies Days but is more pessimistic and contemplates the days coming to an end.  A lot of these songs of mild bemusement and healthy  cynicism still look on the bleak side of life, taking in the minutiae  of the mundane and are a travelogue of tedium and the occasional sunny spell.

I go to the gym, to try to work-out
the reasons that people live their silly lives,
doing their thing…

Property Shows is a song with laidback cynicism with a weary groove on which Eric muses about people rather than places.

His songs have always had a sense of place about them, whether he was living in Hull, Chatham or France, the location always seemed to inspire his creativity in grumpy bursts. The difference with this album is that he does seem to have found a spiritual and physical and shared home in America with his true love.

But you’re still not gonna find a jaunty, shiney happy song herein! The feel of the music & production is a kinda junk-shop psychedelia with drones and banjos and everything but the kitchen sink thrown in.

The case could be made for Eric being the UK’s equivalent to Lou Reed – in terms of having a back catalogue of brilliant songs that ‘make you feel less alone’ and carving an idiosyncratic path thru the music business for himself.

I’ll leave the last word to Eric (taken from the Fire press release) talking about America, life and death.

“I’ve been touring the U.S. since 1978 so moving here wasn’t a complete culture shock. I’ve driven from Rhode Island to San Francisco, Minnesota to the Gulf Of Mexico. I keep rolling along and sometimes the sunrises and sunsets are glorious and I get to thinking about things like where have I been, and how the hell did I wind up here? Some of the songs are quite reflective – the idea of dying one day becomes alarmingly real. I’m quite accepting of it – maybe I’ve got twenty years left if I’m lucky. Ten more albums…. I’ve been through some tough shit at various times in my life. I survived. I’m lucky, I have a great life.”

and he’s made another great record.  God Bless amERICa!