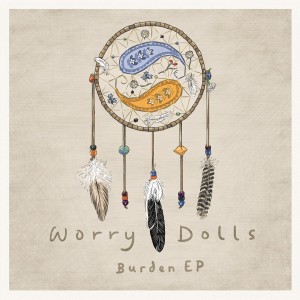 Louder Than War’s Clive K Hammond finds out whether a shared colouring of red hair can be the dynamite to create beautiful folk-pop. Londoners Worry Dolls – accompanied by their second release ‘Burden’ – prove it can be.

Under normal circumstances musicians connect through a shared fervour of interests, sounds and beliefs. Reading the same insipid university degree, chance encounters at narcotic themed parties, holding the same insatiable lust for the same side orders only an Italian Express pizzeria can offer; an endless list for an endless array of outlandish experiences that unite artists of our day. London based folk duo Worry Dolls’ fellowship began through their red hair. The rest, naturally, is history.

Since the pair released their self-titled debut ep, their quirky pop sound – awash with rascally metaphors that complimented their acoustic led recordings – has been retained as they welcome their evolutionary ep ‘Burden’. Although it still resides strictly within the sanguine field of country kissed Trampled by Turtles’ grooves meet repressed Laura J Martin quirks, the lyrical complexities that are typically knotty to generate become second nature.

‘Long Gone’ – opening with Zoe Nicol’s piercing banjo, the track becomes awash with Rosie Jones’ shimmering steel guitar murmurs that bursts out from its loose verse passages into rounds of jerking intracacies and emancipating grooves – concerns itself with impassioned vulnerability; “So ashamed, I’m angry because I tried so hard but it came to nothing, I thought it was different, how wrong could I be?’ angelically hummed out by the pair entangling their alluring pop melodies.

As the collection concludes with ‘Monkey On My Back’ the despondency is maintained with Worry Dolls’ instilling a resilient, yet accepting mentality towards star-crossed attachment. “I am the clown in the circus crowd, the paint on my face will hide this frown, I can’t let go,” is grittily worded out; a complete disparity from the tune’s traditional, almost medieval vocal roots. ‘Monkey On My Back’ is ‘Burden’s most mesmerising track; the hardened energy smouldering within the banjo and biting drums, the explosions of vocal collages that emerge only heighten the frailty of its muted breakdown – a true delight.

Forced between these cumbersome narratives ‘Be So Cruel’ – a reflective ballad that shifts into a sprightly refrain of bluegrass country – and ‘Shaking In Our Boots’ – contemplating the dual menace of adolescent relationships – sit. Both embody aching patterns of shy melodies; the earlier infectious within its main hook, the harmonica cutting against the battling beats and tumbling guitars, the latter more cheerful within its fornicating melodies, a haunting seduction resonates within its varied textural drops.

As a second independent offering ‘Burden’ truly captures the spirit of Worry Dolls. Coloured with a sincere Sam Amidon honesty, it further cements the duo’s folk based appeal. It’s clever. It’s raw. It forms an instant association with all that are willing to listen. ‘Burden’ will no doubt be at the nucleus of any future album.