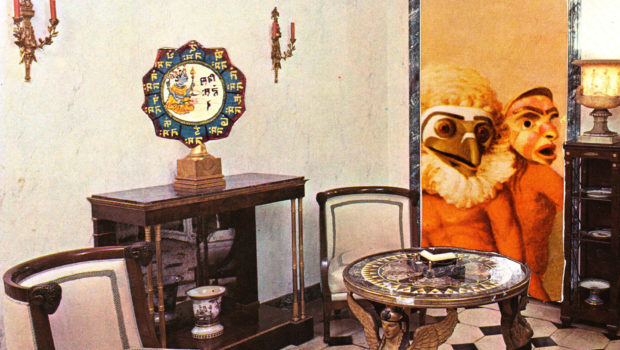 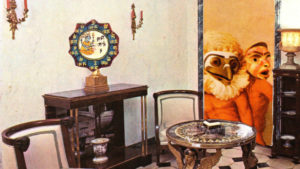 A brilliant mix of two separate visions separated by an ocean, but somehow coalescing over a common mood. The atmosphere is very thickly laid on -like a Gustave Doré etching or a small canteen in the Dutch Bollenstreek, where the coffee filter needs changing and the air is thick and fuggy with fag smoke. As one lyric on this release so appositely puts it, “as a world inside, filled with dust somehow.”

Todd Tobias of GBV fame has released on Tiny Room before, and Stefan Breuer, of World of Dust fame is an avowed GBV fan. So there is common ground to be fertilized and developed after their first, partial collaboration, Womb Realm. Still, whilst Tobias’s other works on Tiny Room – such as Impossible Cities – have a more investigative, quizzical air, these tracks are much, much more low key and maintain a steady, lugubrious plod, from the opening salvo (‘Welcome’, ‘Blood’ and ‘Worms of the Mind’ through the beautiful, Barretesque ‘Yellow Fangs’ (‘Golden Hair, anyone?) to the all-too-short ‘Glowing’.

What is notable is the quality of the lyrics on this release. And how they dovetail with the musical score. They have a depth and presence about them – a tangible emotional shelf life if you will. A quality that isn’t (understandably) always the case with Dutch artists working in English. This is best heard in the sense of timing, no line is rushed (it’s as if the finished vocals are the result of a million takes, the final, wearied effort somehow being the best). And care has definitely been taken over diction and other boring details that tie the emotional rope bridge between singer and listener. It’s an impressive body of work in itself, separate from the music.

Adding all these impressions up, when listening to tracks like ‘Naked Science’ and  it’s hard for this reviewer to avoid comparisons with World Shut Your Mouth era Julian Cope, especially maudlin Copey classics such as ‘Head Hung Low’ or ‘Me Singing’. Or the later hidden gem, Droolian. And tracks like the wonderful single ‘Tarot’ or the question and answer on ‘Citadel’ is the sort of hidden heads’ pop music that hasn’t really been heard in decades, there is maybe a similarity in attitudes with GBV stuff like Same Place Where the Fly Got Smashed. Maybe there’s something of Smog here too. Whatever, and despite some of the tracks being  moods or sketches, it’s great.

It’s one of those releases that you will play and play without ever realizing why. Which maybe its greatest strength.