Home Music Bands World Cup Of Music 2014 – full details about the other world... 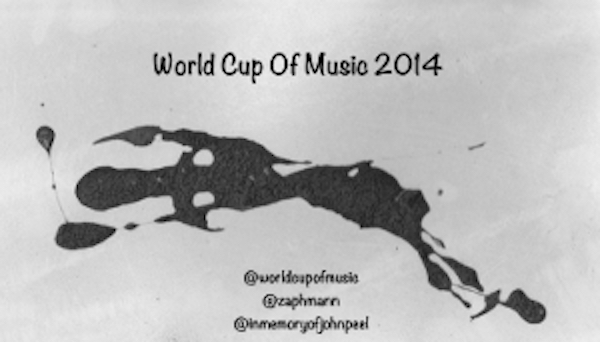 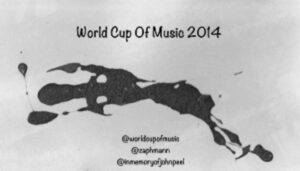 Louder Than War are honoured to have been asked to help host and spread the word about the 2014 edition of the World Cup Of Music. We’ve also been asked to try to enlist the help of you, our readers, to make this the best and most competitive World Cup of Music ever. To find out how you can contribute and to find out what the dickens the competition actually is, read on.

The World Cup Of Music is the brain child of one Zaph Mann, the guy behind the excellent radio show In Memory of John Peel. He started it back in 2010 (and once you’ve done reading this I suggest you visit this link to see how that year’s world cup of music panned out) so it’s still very much a fledging competition – but that should just add to the excitement we feel.

The competition is pretty much what you’d expect from the name of it. It’s a world cup that runs parallel to the football one but that sees teams of tunes from each country competing. Every game will be ‘played’ by music from both nations and a result will ensue. The competitions goal is to…

“…let you enjoy real music from the 32 nations competing in Brazil for the World Cup – whether you like football or not.”

It promises to be great fun and is guaranteed to introduce you to music you’ve never heard before! It’ll also give another angle and talking point to the official world cup.

So to re-iterate, this time in Zaph’s own words…

“The World Cup of Music is a competition between real songs (not corporate pop) from each nation competing in the Football World Cup.”

“Each country has a “Squad” of music acts and their work. Every match is then decided BY MUSIC from the countries involved.”

A simple enough idea then.

Now for the exciting bit – how you can take part. One obvious way is by voting for your favourite songs. You’ll be able to do this via social media (get following @worldcupofmusic now on Twitter and watch this space for a link to a facebook page) or by emailing Zaph on IMOJP@zaphmann.com. We may think of other ways to do this too!

In the first instance though, before any voting starts, we’d like to enlist your help building up strong squads for all the competing teams. We have a lot of the places in the teams filled but there’s still some gaps, especially for the more less well known countries. You can suggest music all the way through the group stages (first two weeks) so don’t think now it’s started it’s too late! If you’ve got a banger from Bosnia-Herzegovina, the Ivory Coast, Honduras Or Iran say that you think could go all the way PLEASE GET IN TOUCH!

There’s a list of all the competing teams below – if you can think of any great songs by artists from any of the countries there just drop Zaph a line on IMOJP@zaphmann.com or tweet him on @worldcupofmusic.

Finally, we’re also looking for expert panellists to help out! At the moment it’s all looking very English speaking so ideally we want people for whom English isn’t their first language to come forward please. You def don’t need to be interested in football but an interest in music may come in handy as you’ll be listening to quite a lot of it – and ultimately judging it too! The World Cup Of Music 2014 is an equal opportunities employer, of course, so applications from all will be gratefully receiving and you’ll all be considered for the job.

We’ll be posting daily podcasts after which you can vote. More details about this when we put the first podcast up.

Meanwhile here are all the teams…

And finally, in the words of Zaph himself: