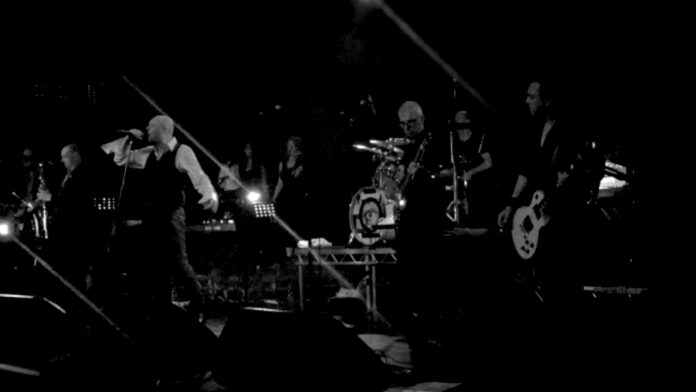 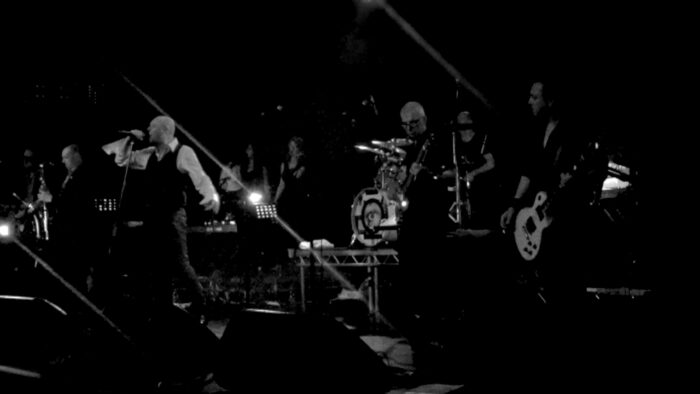 Woody Woodmansey’s Holy Holy, billed as Tony Visconti & Woody Woodmansey with Glen Gregory.
Birmingham Academy
29th June 2015
Live Review
It’s been eleven years since David Bowie last toured after cancelling due to a major health scare that put the kibosh on his ‘Reality’ tour back in June 2004. Since having emergency angioplasty he’s made only a handful of guest appearances. His absence has carved a void on the live music scene, there’s a fan’s compulsion to hear his music played live on stage. If the man himself is not available to play then I guess you could attempt to fill those Bowie cravings with a tribute band. However there’s something else, something more than any old tribute band, a super group called ‘Holy Holy’ featuring two pivotal Bowie legendary associates, Mick ‘Woody’ Woodmansey and Tony Visconti. Woody was Bowie’s drummer from 1969 in The Hype and then became one of Ziggy’s spiders. Tony Visconti also played in The Hype on bass and then went on to produce and play bass on the ‘Space Oddity’, ‘The Man Who Sold The World’, then sporadically turned up throughout Bowie’s career to produce some of his finest albums including his latest 2013 offering ‘The Next Day’.
Woody Woodmansy’s Holy Holy has just completed a successful UK tour playing the ‘The Man Who Sold The World’ in its entirety. I went to see them on the penultimate night of the tour at Birmingham’s 02 Academy.
The band appeared on stage to warm rapturous applause and kicked off with ‘The Width of A Circle’, immediately I was impressed with the vocal inflections and delivery from the often termed, “that bloke from Heaven 17” Glen Gregory. He had won the crowd over from the very set off. Performing David Bowie’s often leftfield song lyrics to perfection whilst often prancing around and owning the stage in smart attire. Until this gig I had no idea Glen Gregory was such a stupendous singer. During the set Visconti commented that Glen was his first choice and a man with a set of producers ears would certainly know who and what is best. Tony was also wise to protect those golden earlobes stopping the band during ‘Black Country Rock’ to pop in some ear defenders, then light-heartedly blaming his decision on the loudness of Woody’s drum playing. It has to be remarked upon that Woody can still belt the drums as good, if not better than he ever did on a kit sporting quite possibly the coolest customised bass drum head I’ve ever seen, basically Bowie’s open eye from ‘Aladdin Sane’ cover photo shoot in a circle set upon a test card design.
Marc Almond joined them on stage for ‘After All’ clearly joyful of performing his hero’s music live on stage.
The highlights played from the M.W.S.T.W. album for me were the last two tracks, the title track itself which was the first David Bowie song that as an infant I ever became aware of but performed by Lulu! Arguably the best single she ever released! Then the haunting track ‘The Supermen’ with that mighty timpani intro that really did rock the tits off the audience!
Throughout the show there was much appraisal from Glen for the other members of the band especially for Visconti and Woody, as they belted out a further fourteen classics from Bowie’s early 70’s period proceeding with ‘Soul Love’. Marc Almond re-emerged on to the stage to ham up a medley of ‘Wide Eyed Boy from Freecloud’,  ‘All The Young Dudes’ and then collapsing in a heap on the floor with Glen after reaching the climax of ‘Oh You Pretty Things’. Then with age, laughing as they struggled to get back to their feet, they were clearly in their element, which reflected on the crowd.
Visconti paid tribute to the late great Mick Ronson telling the audience how much he and Woody miss him, creating a huge cheer from the fans. Holy Holy’s guitarist James Stevenson who’s multifaceted career spans over 40 years with Generation X, Chelsea, The Cult and my personal favourites Gene Loves Jezebel, told me he was inspired to pick up the guitar because of Mick Ronson. Stevenson played Ronson’s guitar parts absolutely flawless. Visconti then went on praise David Bowie as the reason we were all here before introducing Ronson’s daughter Lisa who sang ‘Lady Stardust’, which was awful nice! Lisa Ronson did her father’s memory proud.
Marc Almond was called on the stage again this time to sing as a duo with Glen both seemingly trying to out do each other vocally whilst giving it their all, at times it did sound a little messy as they both belted out their lungs to the powerful chorus of ‘Watch That Man’! Glen put that much effort into the song, in jest he panicked about the next track on the set list ‘Life On Mars’. They played ‘Ziggy Stardust’, ‘Changes’ and ‘Rock N’ Roll Suicide’. Glen joked again, “I’m going to play one of my favourites ‘Temptation’!” which had the crowd laughing.
For the encore they did ‘Time’ and ‘Suffragette City’ and then Woody came to the front of stage to thank everyone and announce they would be doing a signing session for the new live album recorded last September at the Sheperd’s Bush Empire after the show.
This gig gave me my Bowie fix for now, however I yearn for them to do it all again, maybe they will do ‘Hunky Dory’, who knows?