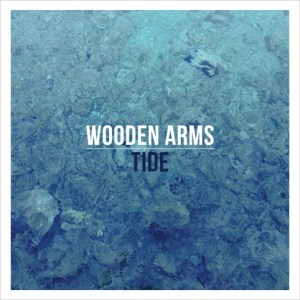 The initial tones of opening track December are intriguing if not beautiful. Violin strings and piano make for a captivating experience, almost Kate Bush like (that comparison will almost certainly be used again), it reeks of class and genius. The softest of vocals compliment the music perfectly as drums, trumpets and continuing sweeps of violin magnificently gel and become instantly at one. Breaking into a near trip-hop beat as the track fades, it’s an incredible piece of music.

The theme of chamber music flows though the album but rather than appear high brow, it communicates the Wooden Arms sound dramatically and offers an alternative to today’s often mundane pop. Vicenarian does go slightly more along the pop line, bit again the gorgeous violins and near doo-wop vocals take it to another level.

Title track, Tide confidently evokes feelings of ebbing waves flowing and caressing the beaches. Vocal interplays between male and female voices are superbly arranged and seems to cascade against a backdrop of strings and piano. Rising and falling then rolling again Tide sounds like two, maybe three short songs interwoven together. For the final minute, rousing drums enter and the choral harmony towers confidently above all else.

Again, the Bush comparison comes in the form of the backing to Noah. A one chord only simple yet successful movement perhaps serving as an interlude to the albums final tracks Waiting and False Start, the latter of which appeared on their critically acclaimed debut EP last year. Both tracks are pensive and bountiful in their continuing nothingness. Wooden Arms don’t go overboard in their arrangements as they don’t need to. Simplicity is the key to creating a sound that is nothing short of sumptuous.

The downside to Tide is that there are only six tracks. Maybe a pre-cursor to a longer, inevitably towering collection, Wooden Arms have the talent and skill to create masterpieces of often spectacular class.