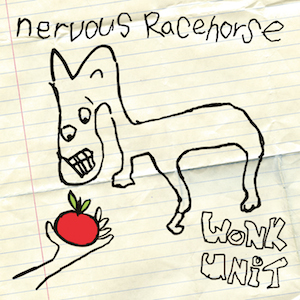 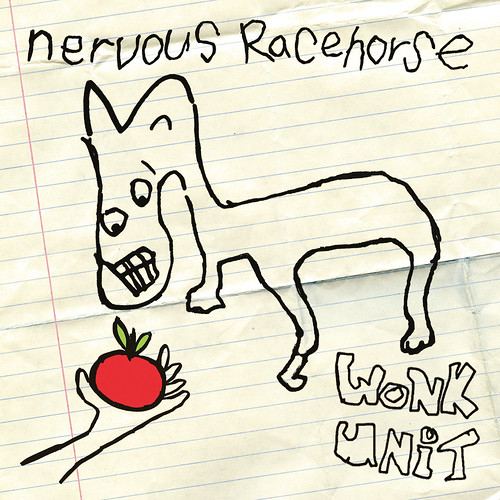 Wonk Unit are arguably the future of punk rock; I fully accept that that’s a bold statement, but having had ‘Nervous Racehorse’, the fourth full length album from the London outfit on rotation for the past week I feel they entirely justify the claim – I’m told they began as a performance art project, essentially a vehicle for vocalist Alex Johnson who was responsible for writing all the tracks on this gloriously diverse album; that being the case ‘Nervous Racehorse’ sees Wonk Unit take up the punk mantle and effortlessly demonstrate just what punk rock should sound like.

The cover art displays four sink estate scallies, none of which are old enough to have read Mark Perry’s infamous “This is chord, this is another, this is third… now form a band!” quote – however Wonk Unit have absorbed the ethos of the line, and have produced an album that’s is utterly at odds with the perceived conventions of punk rock, and what can be more ‘punk’ than that?

Opener ‘Wood Pigeon’ a wistful organ led lament, as Alex positions himself as a humble bricklayer looking out the yuppies in their “big flash motor” his vocals delivered with measured contempt, before ‘Lewisham’ – a master class in how to write a ‘punk rock’ song, energy, crashing beats, hooks a butcher would be envious of as Alex recalls tales of getting out of his face in Lewisham…’Nan’ remains in the obvious punk realm though veers towards hardcore as Alex in the space of 90 seconds sneers “Nan is old, pisses with the door open, scowls at my friends, laughs when her grandson gives her a hug, spills milk on the floor, woo hoo”…live, this would see the spark mass slam dancing which would then continue through ‘Go Easy’ a raging life lesson to well-known Wonk Unit fan Teddy Fourlegs as they plead that he eases off on the booze.

‘Siobhan’ really took me by surprise, on first listen I thought genuinely thought it was one of those pressing plant mistakes, then Alex’s distinct vocal breaks through coupled with the same organ from ‘Wood Pigeon’ before morphing into a bizarre Country style romp – I was trying to identify quite were I placed the similarities and the best I could come up with was Lilly Allen’s ‘Not Fair’ in some sort of mash-up with the boys from Elbow – seriously it’s that weird, but as insanely catchy.

The entire album drags influences from across the widest of music spectrums, the trick is that Wonk Unit have the ability to interpret these influences and to produce something entirely unique; the album sounds like everything and nothing you have heard before – ‘The Trail (French Booty Song)’ a brass infused ska jaunt as Alex describes following a ladies derriere up escalators and down a mine shaft complete with mock French female backing vocals.

‘Heroin’ a sardonic swipe at the hopelessness of that particular addiction, complete with loud/quite breaks, before a time shift into fist punching final verse as Alex laced with vitriol reminds us that “heroin is really cool”…then ‘I Love My Nagging Wife’ which as I listened made me think I was listening to a reworking of Bad Manners ‘Special Brew’, and then the lyric “I apologise for my bad manners” – he’s a clever boy that Alex Johnson.

‘Nervous Racehorse’ will challenge your conceptions of what a punk band should sound like, which I reckon makes them one of the most vital bands out there right now – this album has the ability to make you laugh, to smile inanely, to raise your heckles, and most of all to make you thankful to Wonk Unit for having the guts to forge their own path, immune to trends and fads – Wonk Unit have crafted a glorious chaotic, highly imaginative album that elevates them above the DIY punk genre, they have broken the rules and that is how they have ended up with such a perfectly formed release.