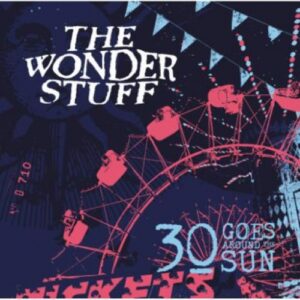 The Wonder Stuff – 30 Goes Around The Sun (IRL)

The Wonder Stuff sound like The Wonder Stuff. To try and describe their music to a newcomer is near impossible as to try and draw any comparisons results in nothing. Since their debut album in 1986, they have produced music that is unique in sound and style.

30 Goes Around The Sun, as the title suggests, marks thirty years in the business. To be precise since the band first walked into a recording studio and while the line-up has changed in part due to the untimely deaths of bassist Rob Jones and drummer Martin Gilks the clear effervescence has remained.

Now approaching 50 years old, frontman Miles Hunt can still belt out a tune or two and although 30 Goes Around The Sun is no Eight Legged Groove Machine (1988) it is clear from the openings of the albums intro (imaginatively called Intro) that the band haven’t lost anything that made them so popular.

One thing that sets the album apart is the inventive and skilful violin playing of Erica Nockalls. A feature on almost every track it adds a whole new dimension to the album and often gels tracks together in the unlikeliest places when the album is sometimes bordering on becoming a little too ‘middle-aged- man safe’.

Don’t You Ever blasts out powerful drums and guitars and, of course violin, whilst Hunt sounds as he did all those years ago with his unmistakable vocals. It contains all the controlled aggression that we are accustomed to and huge bundles of high energy and drive, and In Clover, an album highlight, is classic Wonder Stuff.

It’s hard to pinpoint what makes The Wonder Stuff so special but they manage to do it, and whilst many artists are attempting comebacks and making very average albums Miles and crew seem to have slotted back into the scheme of things very easily. Maybe it’s the seemingly constant touring of Hunt and Nockalls that keeps them grounded or maybe it’s just an inbuilt youth and effervescence.

The production by Simon Efemey (Napalm Death, Paradise Lost, The Wildhearts) is spot-on and often reaches pinnacles which would be very easy to fall from. Instead the result is songs that are taken quite literally as far as they could go before they would otherwise have descended into complete over-production.

Good Deeds And Highs and One Day On offer poignant moments and prove that they aren’t just one-trick ponies, and although the later of the two isn’t the strongest track on the album, it does fit in well with its surroundings.

The Affirmation sees the band rock it up and The Kids From The Green reflects on childhood and the move into adult life and independence. The title track appears as album closer as it almost recites a potted history of the band in a fitting end to a worthy comeback.