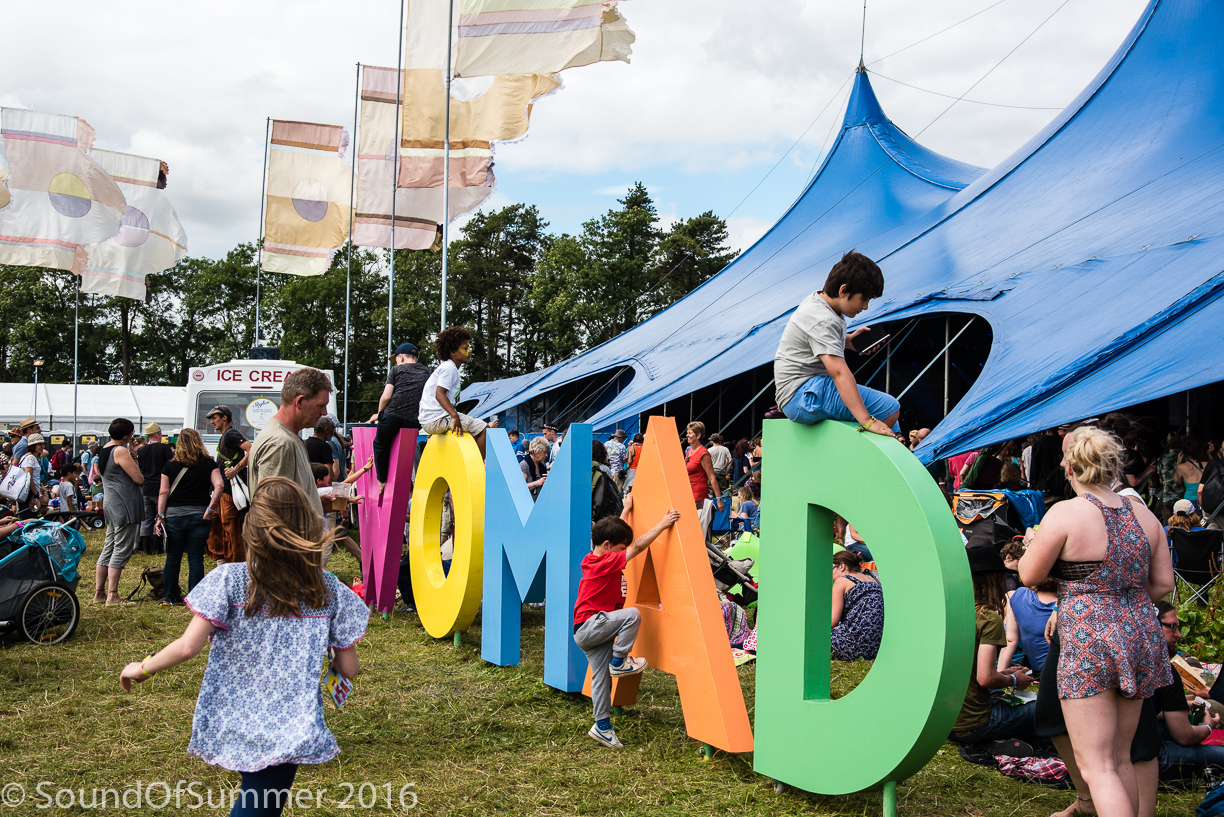 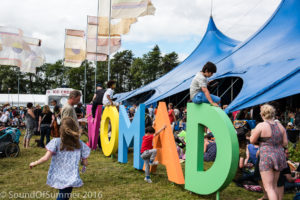 WOMAD has just celebrated its 34th Anniversary and its 10th at Malmesbury’s Charlton Park. Alan Ewart went along to check it out.

My journey to WOMAD began in the the most bizarre fashion. It started out at the 2015 edition of Download festival when Dee McCourt from the brilliant Borkowski PR team suggested I should try it out. I was already booked for another festival last year so decided to give WOMAD a chance this year. I’m a punk and metal fan so I was wondering whether or not WOMAD would be for me, the music is after all a long way from what I am normally comfortable with. I was concerned that I would find myself lost in a world of alien sounds and that I would find little to excite me. How wrong I was.

First impressions count for a lot when it comes to festivals, arrival on site can make or break a weekend. What a joy WOMAD was in this respect. The setting is amazing, the huge site as flat as a billiard table and arrival and setting up was a breeze. An afternoon wander around the site before the first bands played on Thursday showcased a festival that is entirely comfortable in its own skin. It is brilliantly laid out with clear paths to the different stages and the food and merchandise area’s were perfectly placed.

What immediately struck me in the lovely late afternoon sunlight was how spotlessly clean the site is. I was sure that this would change as the weekend progressed but I was wrong. The site was immaculate across the entire weekend. Bins and recycling points were everywhere and everyone used them, I doubt if I saw 20 pieces of litter across the entire weekend, it is a long way from Glastonbury and Reading. Even the camping areas were clean as people bagged up and recycled their rubbish. 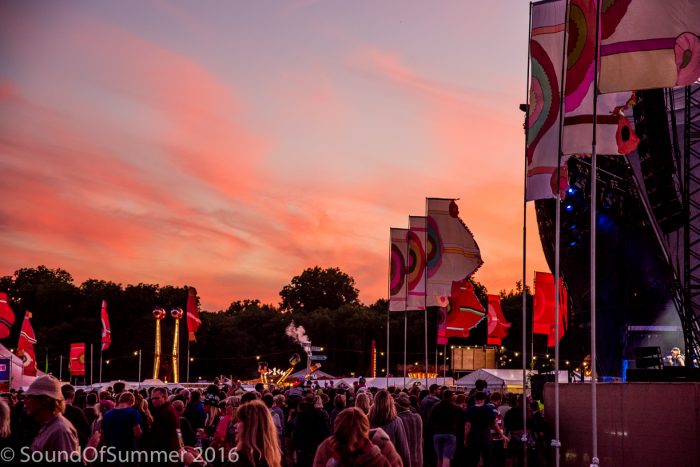 The environment, the lovely weather and the abundance of flags fluttering in the evening sun made it clear from the outset that this was to be a very special weekend. Thursday’s proceedings were opened by the Malmesbury Schools Project. This project affords local children the opportunity to open WOMAD’s main stage and they did so with aplomb. The schoolchildren were joined by a band from Brazil as they sang, danced and drummed through a spectacular set that was thoroughly enjoyed by all in attendance.

Thursday’s MainStage headliners Asian Dub Foundation demonstrated why they have become such a cherished festival band. Their set was dynamic, upbeat and hugely enjoyable. The band seem to have taken a political turn since I last saw them, they turned in a set full of anger much of it prompted by the refugee crisis.

An early entry to the site on Friday saw us wandering around the site to explore all that was on offer. The site is split by a gravel road and a tree-line and beyond the trees was a wonderland. The festival village is well stocked with bars, traders and food outlets. There is a huge “well-being” area and even a spa! The range of artistic activities for kids of all ages are mind-boggling. WOMAD has everything, from a full on fairground, a huge range of activities and workshops and even a breast-feeding tent. More than enough to keep the younger festival goer amused for weeks. 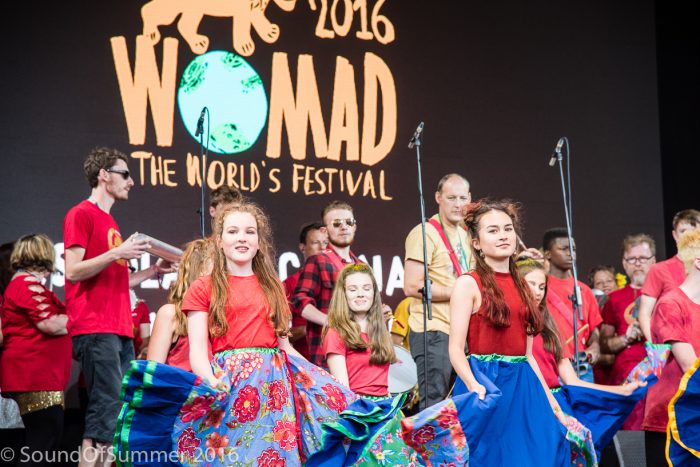 For the adults you will find several stages tucked away, there are a range of acts on the “Molly’s Bar” stage and the Ecotricity stage offered a top-class and eclectic mix of artists. We loved the spoken word stages where poets of trying abilities entertained us as we sat drinking cider in the sun. Sunday’s poetry Slam was a real joy, the eventual winner even managed to reduce the wife to tears twice! The Yalumba “Taste The World Stage” was a revelation. Members of numerous bands who played over the weekend turned up to an onstage kitchen and cooked a dish peculiar to their country or region. They then played a short acoustic set. What an amazing concept and a real joy to see.

Of course WOMAD is above all a celebration of world-wide musical culture, bands from over 50 countries played this year. I’m no expert on “world music,” but I know a good tune when I hear one. WOMAD is all about the beat, where that beat originates is immaterial. The Grit Orchestra provided a nothing less than stunning opening to the MainStage on Friday. The orchestra celebrates the music and storytelling of Martyn Bennett, it was humorous, an enthralling and utterly absorbing hour of music and storytelling.

Later in the day the Hot 8 Brass Band, all the way from New Orlean’s had the huge “Big Red Tent” absolutely jumping as they blasted their way through a repertoire of hot and heavy jazz sounds. Everyone from 8 to 80 was caught up in the moment and they totally rocked it. 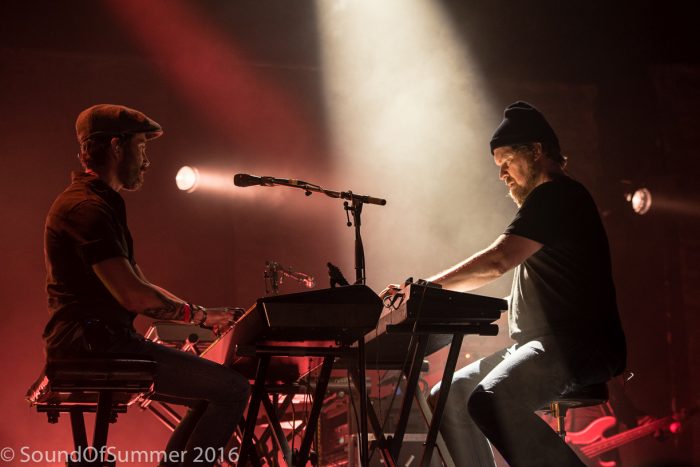 American singer-songwriter John Grant topped Friday’s bill. Grant has lived a life that has left its mark on mind, body and most assuredly in his music. Grant is incredibly intense, his voice is dark, his songs darker. He draws you into a world of melancholia, it is a sometimes painful journey but the rewards are rich if you are willing to suffer for a greater end. Grant is incredibly engaging, you feel that he is exposing his every hurt to you and no matter how you try you just can’t turn away. Spell-binding stuff.

I didn’t think it possible but Saturday and Sunday proved even more relaxing than the previous days. We spent our time away from the main stages and chilling at the smaller stages. The highlights for me were at the Bowers and Wilkins stage. The sound system was simply incredible, by a distance the best you will ever her at a music festival. The weird and wonderful Paddy Steer was amazing but it was Hollie Stephenson who really blew me away. Hollie sounds like a young Amy Winehouse but she is no imitator. She has been writing since she was 12-years-old and has already been picked up by Dave Stewart of Eurythmics fame.

Add in sets by Mercedes Peon and Sidestepper and the party was well and truly rolling. Chilean hip-hop artists Ana Bijoux was incredible as she brought latin jazz, samba rhythms and hip-hop to the Siam stage. Her set was simply incredible and her tribute to the assassinated Chilean radical Victor Jara brought the house down. 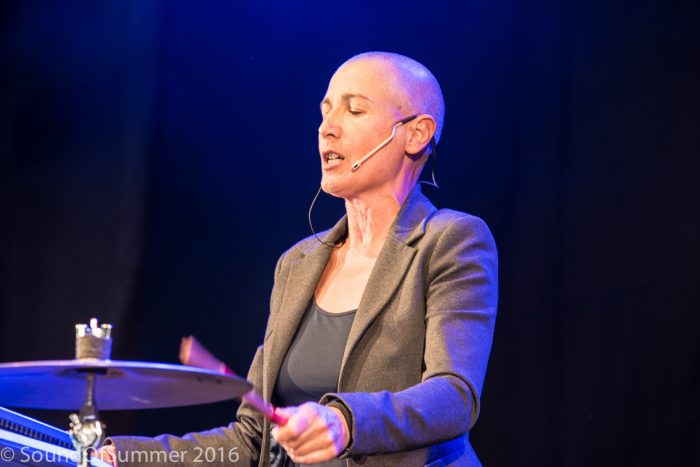 Saturday did bring a bit of a low point in the weekends music with headliner George Clinton. Don’t get me wrong the band were brilliant but Clinton played an almost invisible role. He was wheeled out, plonked in a chair and occasionally stood and waved his arms around. Now 75 Clinton is clearly past it and I doubt if he sand 6 lines the whole evening.

Sunday brought my discovery of the weekend, Bosnian gypsy punk outfit Dubioza Kolektiv. Gyspy punk bands are nothing new but these guys break the mould. If you are expecting fiddles and accordions forget it. These boys focus on guitars and brass and they had the entire tent bouncing. The energy was extraordinary, what a show.

I wandered to the Ecotricity stage to catch The Breath. I had heard great things about them and clearly half the festival had too. I had hoped to photograph them but the crowd was enormous and I could barely see the stage much less reach it. Thankfully I could hear them well enough and what I heard was wonderful, definitely one to watch.

Turkish radical Selda Bagcan has been jailed for her outspoken political views and knowing that added spice to a scintillating performance. Turkish folk music with a twist is spreading way beyond Turkey and Selda is one of its finest exponents. Despite not having a word of the Turkish language the intensity of her performance enabled you to understand that she was calling out injustice and inequality. The atmosphere in the Siam tent was electric as she performed.

Les Amazones D’Afrique finished up my WOMAD, they are an all female collective and a veritable Who’s who of Malian music. The band may have been western in style but the voices came straight from Western Africa, the harmonies and the structure of the songs almost ethereal at times. What an amazing way to end WOMAD, though those of a more hardy disposition that me carried on partying late into the night. 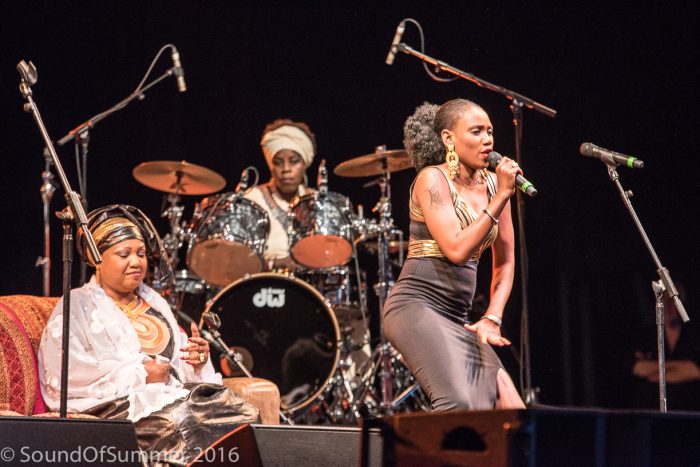 My first WOMAD was an amazing experience, I loved every minute of it. I loved the friendly people, I loved hearing music that was new to me and from every corner of the world. I loved the great organisation, the range of food and the cider bar. Everyone who loves music should attend WOMAD at least once. It is a very relaxing but exciting festival. My advice to anyone who has not experienced WOMAD is to do as we did, just wander and take it all in. Wander into the tents and check out what is happening, it is infinitely rewarding.