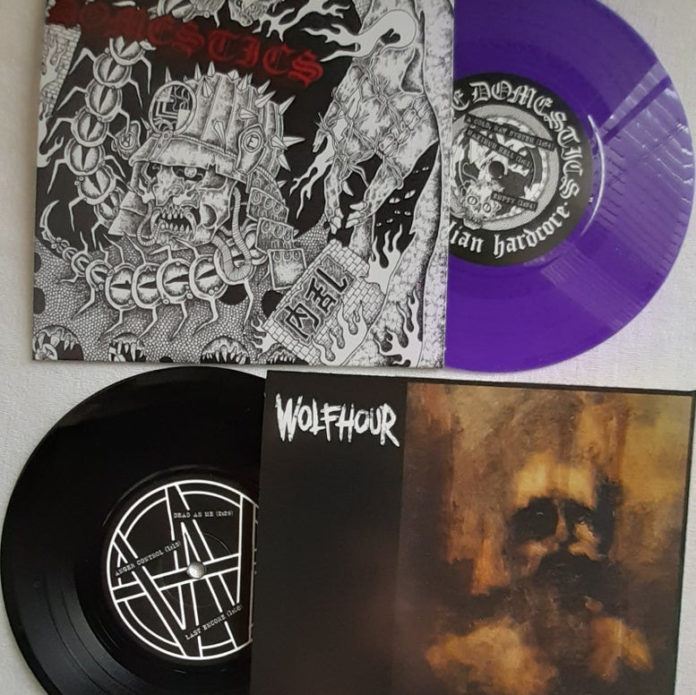 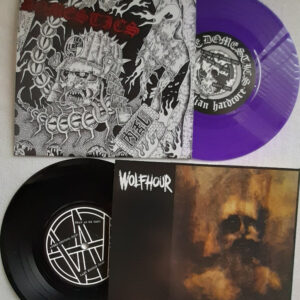 2 bands and 6 tracks from Sweden and East Anglia hurl a frenzy of D-beat, Japanese inspired thrash and Boston inspired hardcore at you.

Hardcore punks I’m speaking to you. Anyone else may as well jog on cos all I am about to say is in such deep code that it will make little sense.

If you’ve not heard Wolfhour and all I told you was that they are a Swedish D-beat band you’d probably have a fair idea of what to expect. It’s all in there: The Totalitar style choppy speedy guitar. The Anti Cimex drums (quite literally, as it is their drummer on the throne), the Cal Discharge/Rat Varukers inspired singing, and the distorted bass. The Anti-Cimex link will probably be enough to pique interest in Wolfhour for many. Imagine I was the market researcher for an imaginary TV gameshow Family Misfortunes. If I asked 100 black clad, patch strewn, spiky haired/dreadlocked punk rockers “Name a Swedish D-Beat band”, I am pretty sure Anti-Cimex would be among the top answers. Did I mention Wolfhour have a member of Driller Killer? I think the deal is sealed.

Listen to Dead As Me by WolfHour

Now then, to our favourite Estuary English Facking Thrashers, The Domestics.  Remember when Ripcord sounded like a Boston hardcore band but with a British accent? And when Chaos UK returned from Japan faster and thrashier having been exposed to the likes of Gauze? That’s why I say that on this EP The Domestics sound like they are from Bristol in the late 80s.

I don’t think this is deliberate and the Domestics will probably be gob-smacked. But they draw on similar influences. Out Cold and Gauze are massive favourites of front man James. Consequently they have arrived at similar destinations. If you put in the same ingredients things will come out somewhere close, although the quality can vary greatly – just look at Great British Bake Off. The Domestics have honed their technique and skill. Not a soggy bottom in sight here. Oh, and a touch of Doom in the first track. Gnarly fast, pounding, shouty.

As has become the fashion these days, this record is available on pre-order now before it is actually out and if you want the limited coloured vinyl (157 on purple, 348 on black) you’d best get in there quick via the Kibou records online shop. It’s also available internationally on Kangaroo Records (France), Amoc Records (Germany), Sick World Records (New Zealand).

Punk rock code by Nathan Brown. More from Nathan can be found over at his Louder Than War Author Archive.