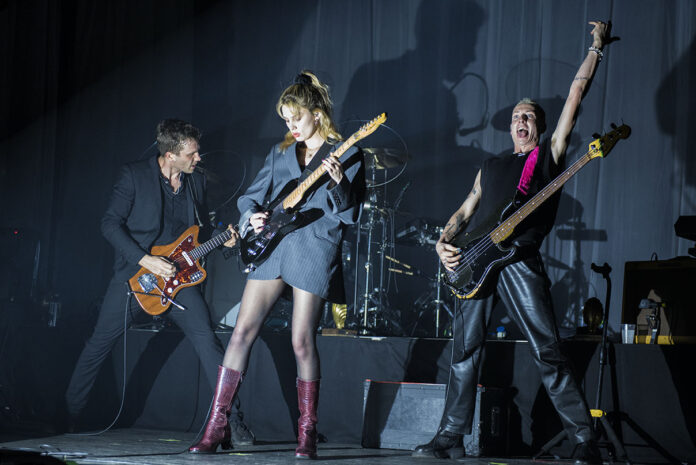 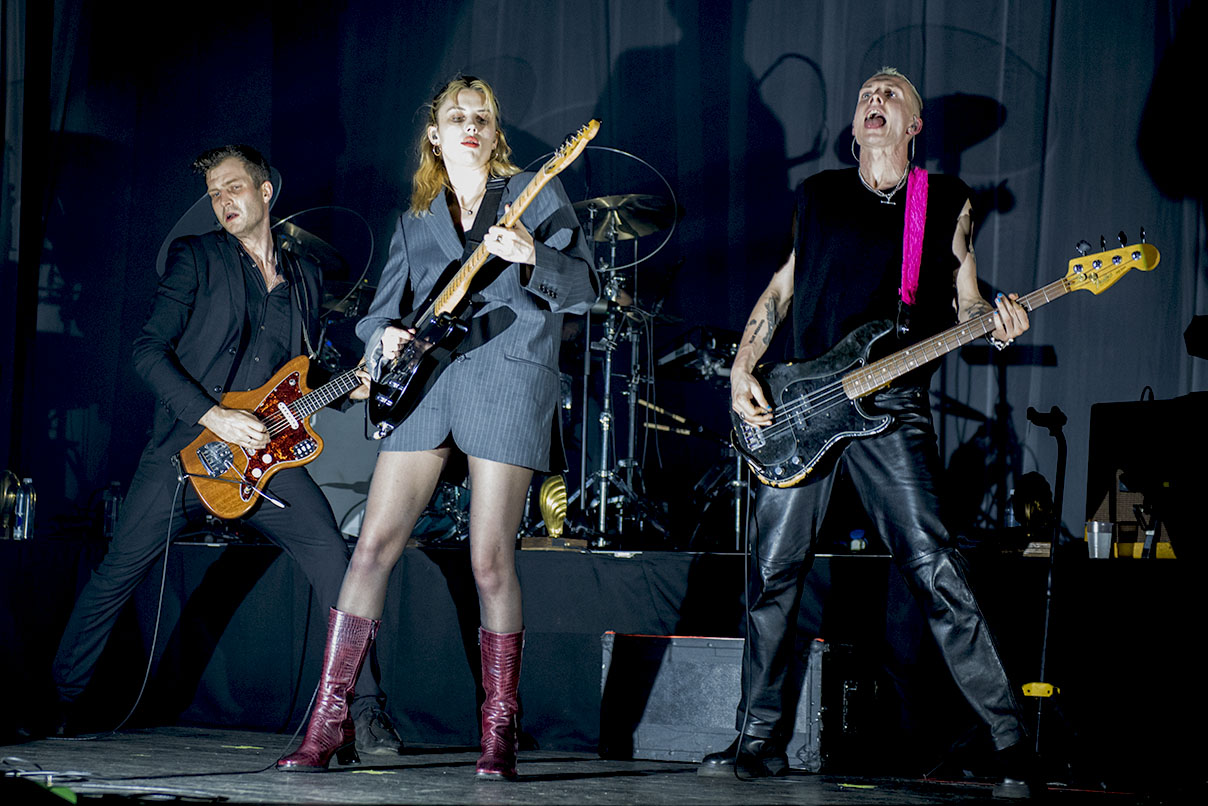 Given the massive number one success of their third album Blue Weekend, it was hardly surprising Wolf Alice had sold out a venue this of this size. Everyone knew it was probably the last time they would play a gig this small, so their faithful fans really made the most of it. Paul Clarke reports back with photographs by Melanie Smith.

First up were Glasgow’s Lucia and the Best Boys, who really went for it in a venue that has so often been a graveyard for support acts. Lucia proved to be a very confident performer, chatting to the audience and pulling off the quite remarkable feat of getting an Apollo crowd to clap along to an opening act during the impressive You’re So Sweet You Should Die. They lived up to their growing reputation as a band to watch. 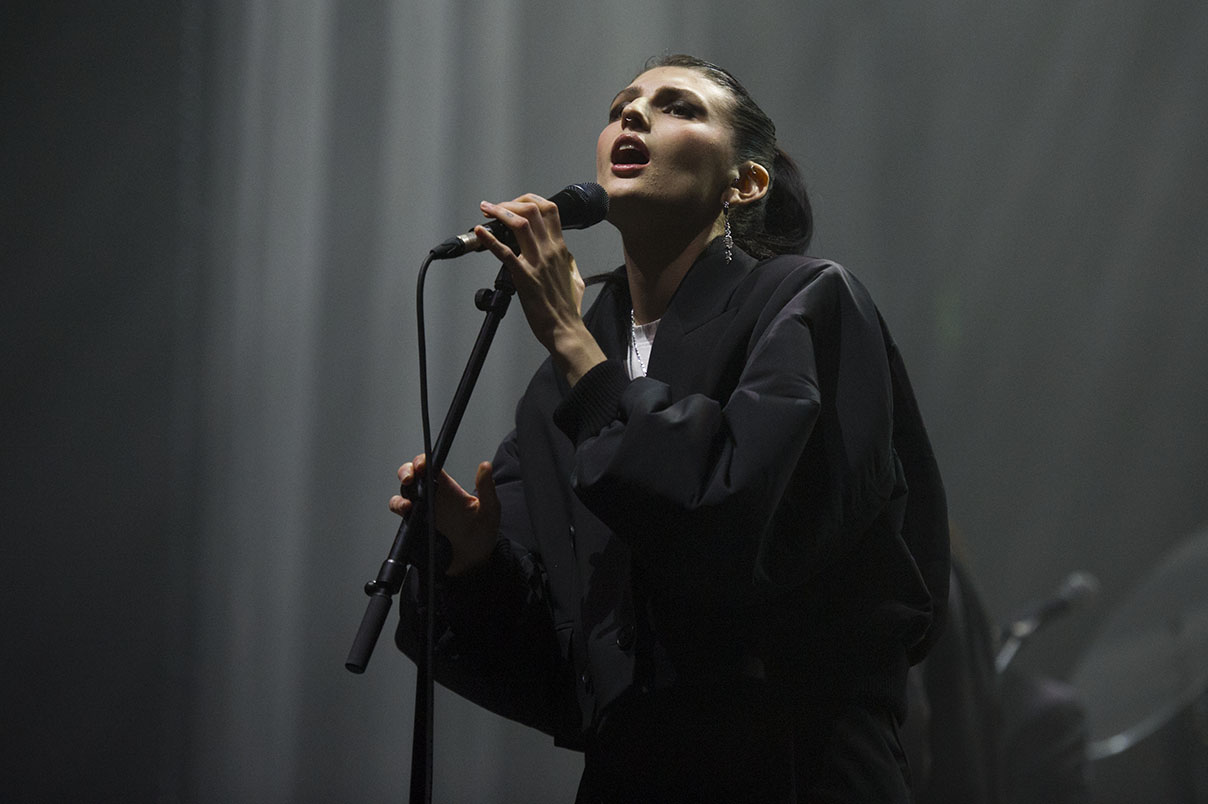 The first time I saw Wolf Alice was at Live at Leeds in a back room, playing to a small crowd, and even then you knew there was something there. We all know predicting which band will hit the big time is a fool’s errand, but tonight’s muscular set proved my instinct that they had something special was spot on.

And they set out their stall from the off, as they smashed into Smile from Blue Weekend, with Ellie Rowsell’s massive voice filling this barn of a venue. Guitarist Joff Oddie and bassist Theo Ellis threw rock star shapes, to a clearly up for it crowd that had already gone a bit crazy. The pace didn’t slacken as this very, very tight band thrashed their way through You’re a Germ, and just when you thought Formidable Cool had taken it down it a notch it kicked up into another rock out.

Finally, they paused for breath with a glorious version of the breathy Delicious Things, that prompted the first of many singalongs, as a very mixed crowd of chart fans and cool indie kids bellowed out the chorus “I won’t say no/I’ll give it a go”. A laconic version of Lipstick On The Glass was proof that Rowsell is our best indie rock vocalist, when she really let rip running up and down her impressive range, on a song about betrayal that must have touched many in the crowd. It also proved that the band, plus added keyboards, are capable of producing subtlety when they need it. 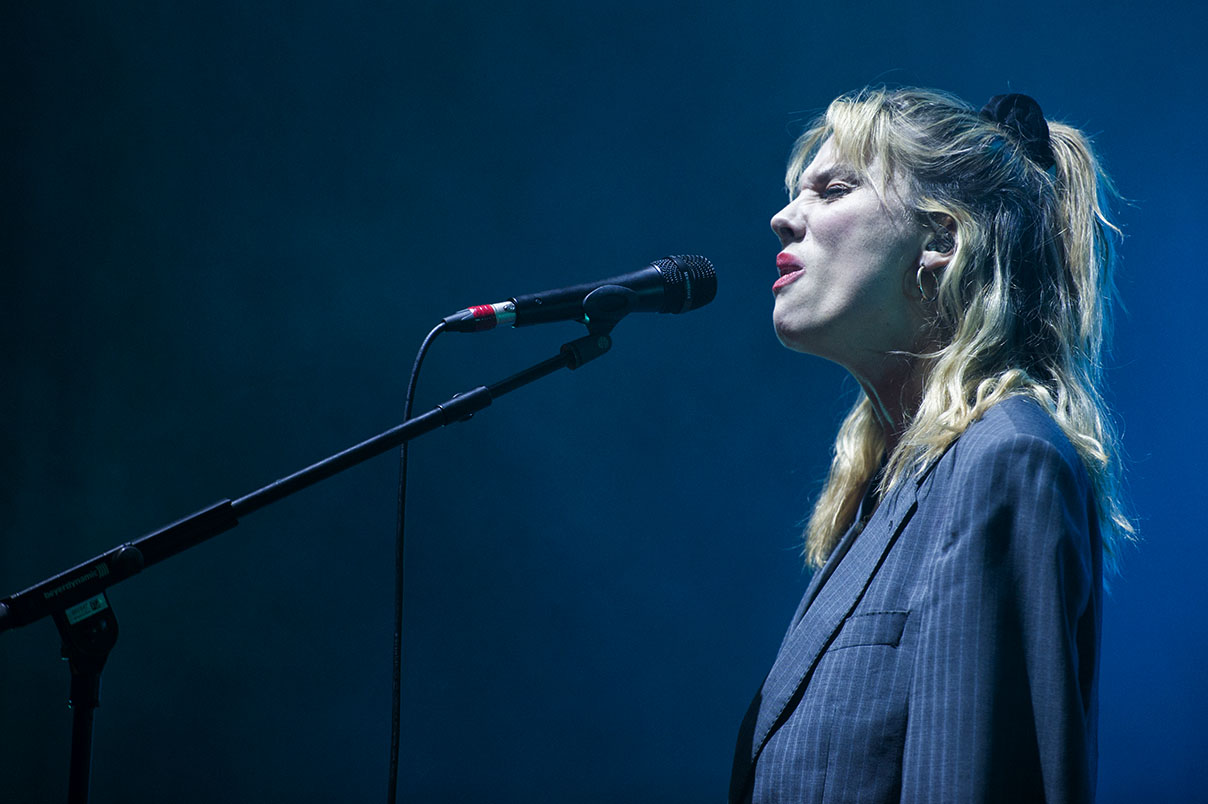 There was no doubting the power of the music, but a minor criticism of Wolf Alice was they didn’t really engage with the punters other than Oddie’s terminally uncool arm-waving trying to wind up an already excited crowd. Ellis at least tried as he urged the audience “let’s have it” before early single Bros, and they did, delivering a word for word rendition of this paean to the unique and intimate relationships best friends have. There was something really moving as two blokes in front of me hugged as they sang the words face to face that proved once again the transformative power of love music.

Rowsell offered up a different side to her vocals on the ballad Safe, silhouetted by a spotlight, standing on the raised section of the simple stage set up. The band broke out the acoustic guitars, backed by lovely three-part harmonies, including their clever drummer Joel Amey who took the chance to show off his great voice.

It’s little wonder their last album was such a crossover hit, as it was packed full of big tunes like How Can I Make It OK?. Rowsell once again showed why she puts other top-class vocalists like Florence in the shade, before a bonkers version of Play The Greatest Hits as she angrily stalked the stage, spitting out the words that offered a modern version of riot grrrl. 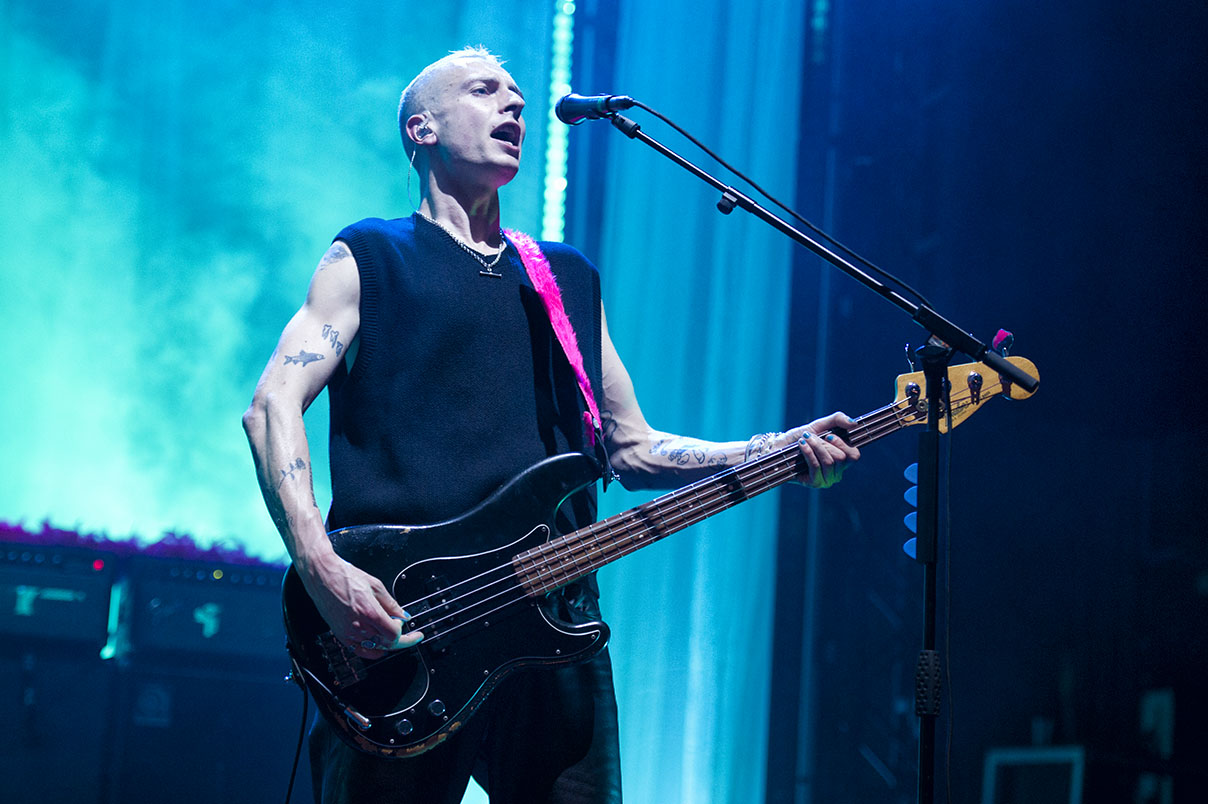 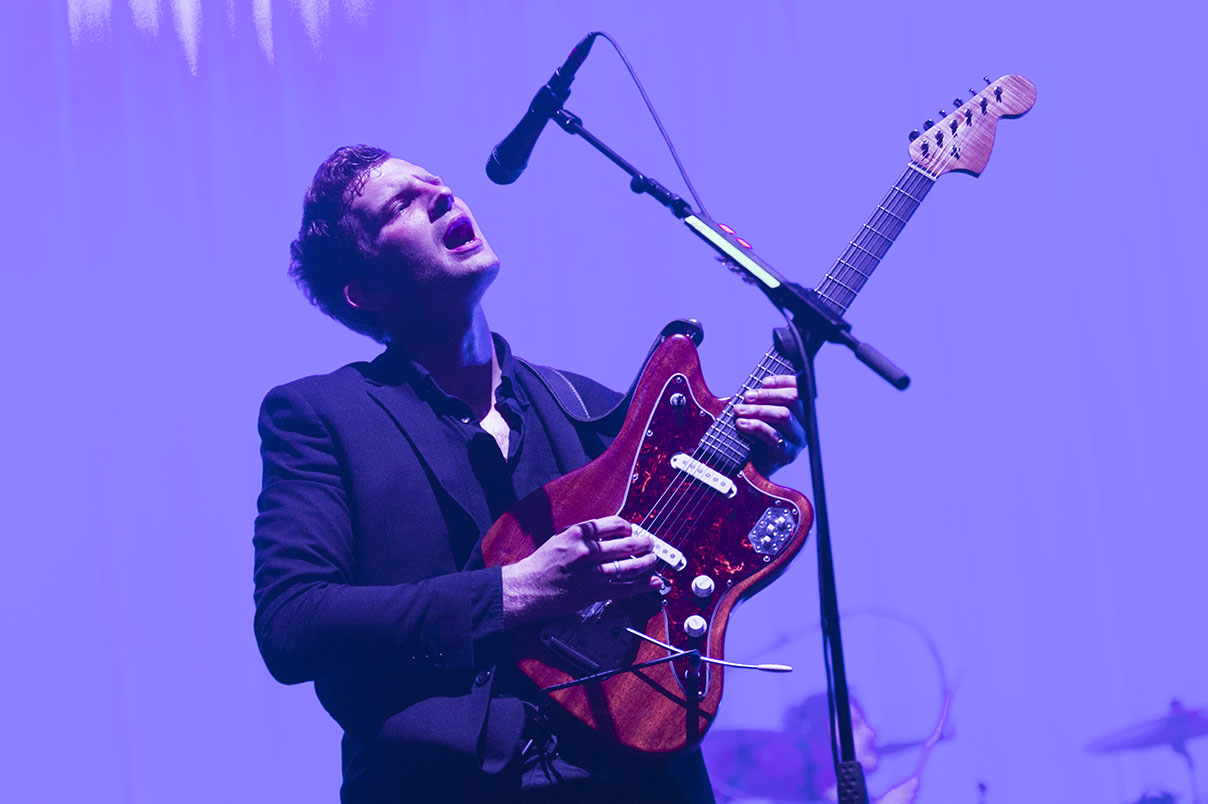 The young woman next to me was bang into Silk, from their splendid debut album My Love Is Cool, which was yet another indie power ballad. The keyboard shimmered over a song that clearly meant something really powerful to her. Unlike some vocalists who wear guitars as a prop, Rowsell is a fine player offering a lovely solo during an intense version of the title track from their second album, Visions of a Life. You could see the intelligence at work with this band, as they brilliantly managed the pace of their set, taking it down for No Hard Feelings with their singer sitting in a simple spotlight, offering another wistful mediation on the vagaries of love as Oddie switched to bass.

Everything was building up to the anthemic, piano-driven The Last Man on Earth, and once again the band could have wandered offstage and left the audience to it as they roared out the words holding a sea of lighted camera phones aloft. That was one of those beautiful moments where the band and audience forged a genuine emotional connection that was profoundly moving. 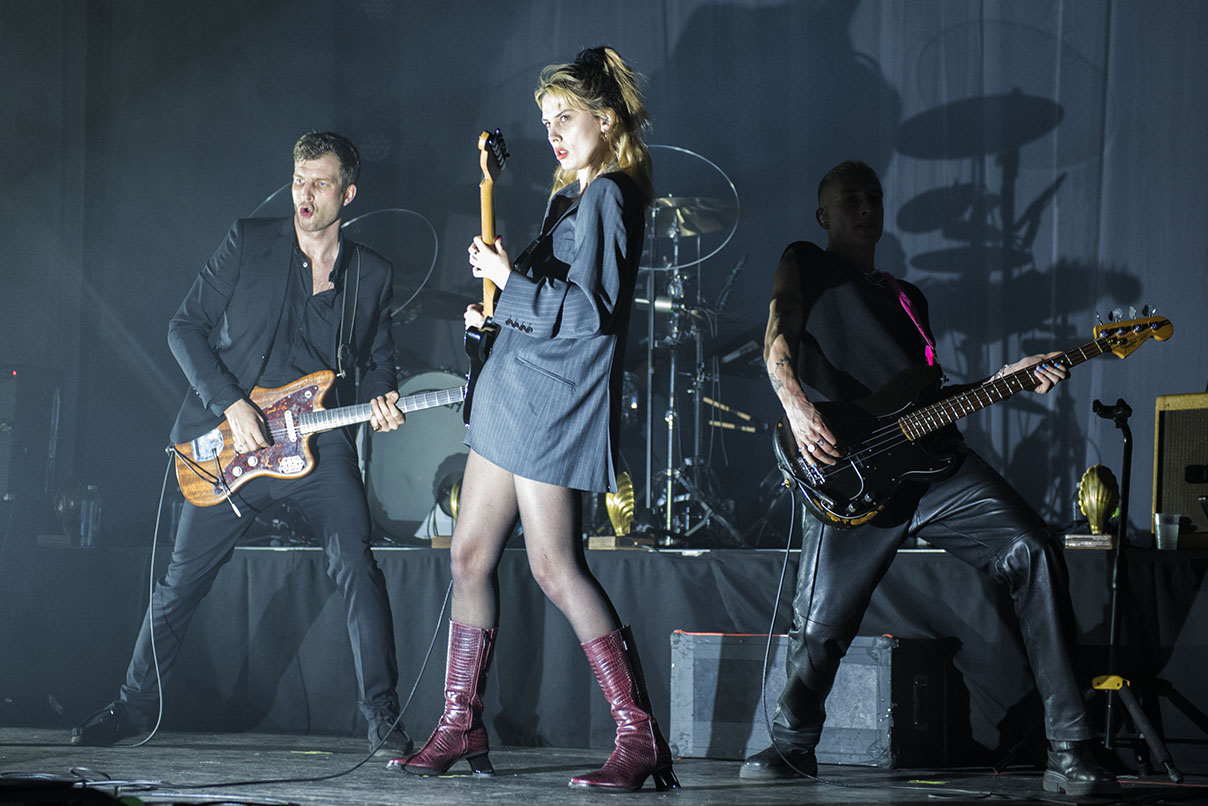 Wolf Alice proved they are a band who are right at the top of their game, with a set packed with bangers and more intimate moments. That said, when they make the next step up to playing arenas – which they most definitely will seeing as they have the big songs required for massive venues – they need to consider how they might connect with much bigger audiences.