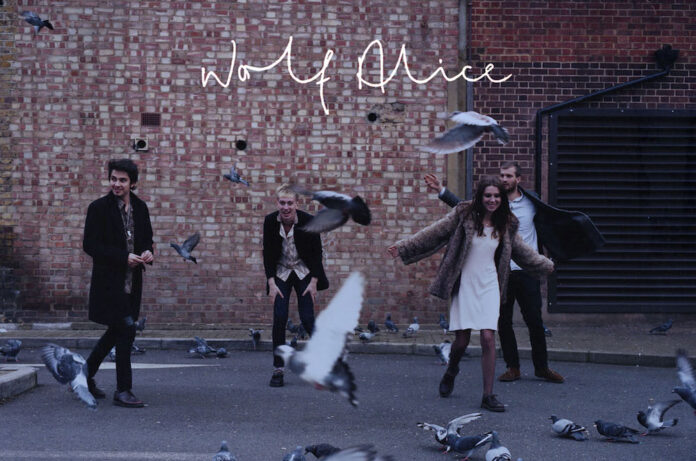 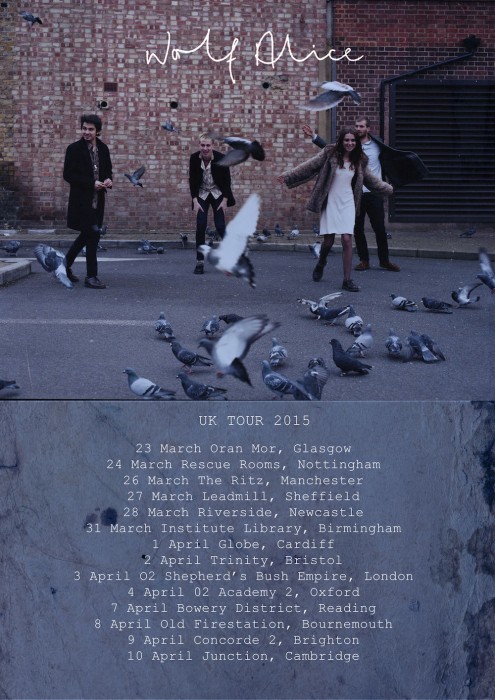 Fresh from their debut, sold-out, US headline tour last month, Wolf Alice have been on tour in the UK. Harley Cassidy was in Birmingham last week to check them out there – here she reports back.

“I’m always a fan of bands that never write the same song twice,” Ellie Rowsell once declared in an interview and it seems that statement has been a mantra which has ran through Wolf Alice’s music since the release of their first EP, Blush.  Balanced somewhere between the coarser side of Britpop and the more delicate end of Riot Grrrl, Wolf Alice’s music has always contained elements of many genres, from hushed acoustics to long, psychedelic wig outs verging on shoegaze, it’s never quite clear what they will produce next. Tonight, their set at Birmingham’s Institute allows their audience a peek into every corner of their work.

The band open with the enthralling Fluffy, its dynamics flitting between soft and harsh as part of that ever popular grunge formula. It’s clear that tonight’s gig, like plenty of other Wolf Alice gigs, is home to a large portion of teenage fans who drink up the indie circuit with enthusiasm. Songs that have been circulating for a while are greeted with a reception that verges on ecstasy. Bros, the cutesy ode to friendship, sees a tidal wave of crowd surfers and screams of “We love you Ellie” fill the dense, atmospheric air. Similarly, this treatment is also applied to the howling chords of Storms and the wonderful She, perhaps one of Wolf Alice’s best songs and certainly testament to Ellie’s wonderful vocals, spitting the vehement line, “She’s a got a boyfriend in a band and they’ve done more than just hold hands”.

Wolf Alice is a name that’s pretty fitting for the band and their live performances; a strain of breathy innocence which holds a certain bite. Ellie’s sugary sweet vocals can easily flit to a snappy, sassy howl in an instant and as the lead vocalist of the group and the main focal point she’s something of an enigma. Tiny in stature with modelesque looks, a boyfriend in the shape of Swim Deep’s Austin Williams and an effortless, girl-in-a-band style, it’s almost like she came package wrapped for Tumblr. Rowsell in particular embodies the band’s stage presence when she performs live; the one everyone’s eyes are on. Yet in interviews, she’s shy, quiet and reserved, keeping her carefully thought over answers to a bare minimum. So maybe, aside from the sound of their music, Wolf Alice embodies Ellie herself.

The band have a indisputable chemistry. They seem to revel in each other’s presence on stage and exude a collective energy, which is especially propelled by bassist Theo Ellis. Wolf Alice’s success lies in uniting a magnitude of styles with a catchy chorus to match each one. Their exceptional rise to prominence is mirrored by their adoring fan base who belt out every lyric of every track, unreleased or not. Throughout the band’s thirteen track setlist they refuse to comply to any genre or style of performing. Ellie tussles with her persona; in one instance she’s fiery and accommodating, brandishing her guitar like a weapon, whereas in other songs, she couldn’t look more vulnerable, her eyes refusing to acknowledge the crowd, hiding behind her instrument.

Pure clarity and bliss is brought to the stage in the form of Blush, You’re A Germ packed a Pixies style punch and the closer of their encore, Moaning Lisa Smile, challenged the security guards at their job as the crowd basically lost their shit. However, the best track of the night went to their latest release, Giant Peach, a brain frying melter of a song that proved that Wolf Alice are incredibly apt at making music.

“I’ve always thought of Birmingham as my second home” gushes Ellie after the performance and judging by the audience’s reaction, they couldn’t be happier about that.

Wolf Alice are here on the web: wolfalice.co.uk. They are also on facebook and SoundCloud and tweet as @wolfalicemusic.

Their debut album, Your Love Is Cool, is released 22nd June which you can pre-order on iTunes here.

All words by Harley Cassidy. More writing by Harley on Louder Than War can be found at her author’s archive or you can follow her Twitter @harleycassidy