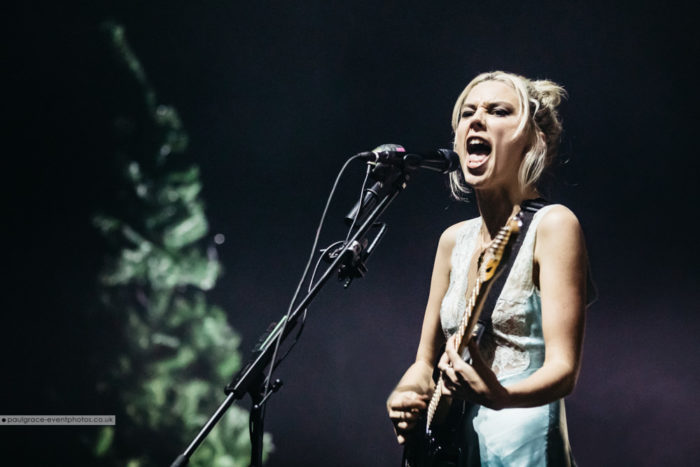 Wolf Alice transformed London’s Brixton Academy into a Winter Wonderland. A good thing that Louder Than War’s Andy Duke brought along his snow shoes to combat the flakes while taking in the noise during the last of the band’s two-night run at the venue.

The Christmas Tree-adorned stage is submerged in blue light as the sound of Brexit-related banter is added over the theme song to Harry Potter. It’s quite the mash up going through the PA as the crowd waits in eager anticipation of the band’s arrival. And, before a sold-out audience, the quartet make their way to the stage to almost deafening applause. While not being an overtly political concern, it’s interesting to note that this subtle reference to Britain leaving the European Union is followed by the band opening with one of their most unhinged tracks to date – Yuk Foo. This expletive heavy ditty is fast, punky, venomous and filled with angst ridden bile. Not the sort of musical fodder you’d associate with a frontwoman dressed elegantly in a floor length dress. But Wolf Alice are masters at effectively doing sonic pendulum swings between light and heavy and across different genres. So much so that there are two clear factions in the crowd; moshers and swayers. The former would not be out of place at a metal gig and certainly aren’t adverse to full body contact during the proceedings. Their more docile companions are mainly on hand for the quieter and more anthemic material. As their name would suggest, the swayers’ collective enthusiasm is displayed via beautifully syncopated arm movements particularly when the foursome’s catchy choruses are in full flight. With any other band, these two tribes would make up for a tense gathering akin to Leave and Remain supporters having a debate. Under Wolf Alice’s watchful eyes, however, the atmosphere is surprisingly celebratory and inclusive.

The wide dynamic breadth of Wolf Alice’s live sound is illustrated beautifully with their second offering – You’re a Germ. From the sparse guitar and vocal delivery of Ellie Rowsell during the intro to the grunge-laden chorus, this is an act who manage to recreate the big sound of their albums with impressive and effortless ease onstage. 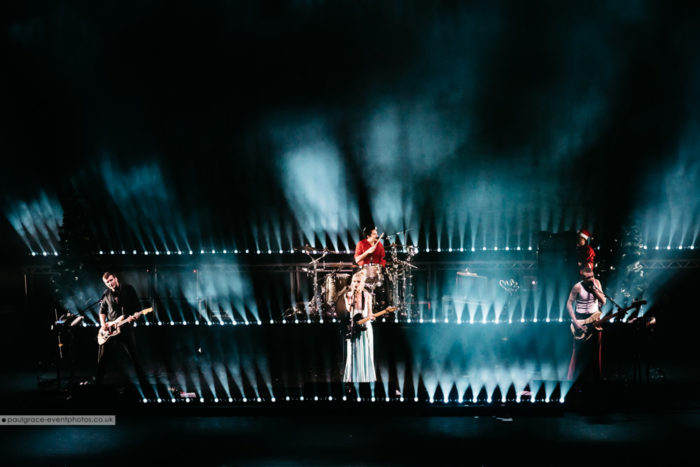 The London group’s performance is also a visual feast. From Joff Oddie hurling his cream coloured Fender Stratocaster up into the heavens and back again during Lisbon to Theo Ellis working the crowd like a modern-day hybrid of Sid Vicious and Paul Simonon with his white P-Bass. Wolf Alice are a well-honed act live. They’re also acutely aware that little details pay off in huge dividends as displayed on 90 Mile Beach. Rowsell, with two separate microphones at her disposal on one stand, alternates between megaphone-infused etherealness and pristine clear vocal sounds to great effect by simply moving her head. Similarly, Oddie seamlessly balances six-string duties on his Fender Jaguar alongside synth parts on Bros. Providing a tight and exciting foundation to the group’s delivery is Joel Amey’s drumming. From the lightest of touches via soft mallet drumsticks on Sky Musings to summoning his inner Dave Grohl on the heavier numbers, Amey is dynamic powerhouse who also delivers great backing vocals throughout the set, especially on Blush. In fact, all of Rowsell’s partners in crime provide great ‘BVs’. Ellis, the other half of the formidable rhythm section, also brings a melodic underbelly and counterpoint to the band’s low end. His style recalls Chris Wolstenholme, when the group are at the heavier end of the spectrum, and Colin Moulding during the band’s more delicate numbers. Behind his punk posturing is a very tasteful and skilled bassist. Another important feature in the band’s live arsenal is Joff Oddie’s guitar playing. Evoking the spirit of Kevin Shields from My Bloody Valentine, Oddie’s solid delivery is the all-important bridge between the poppy and decidedly rocky. Running the gamut between feedback-drenched noise and sumptuously catchy clean arpeggios and rhythms, Oddie’s varied textures and approaches service the strong and highly varied material beautifully. 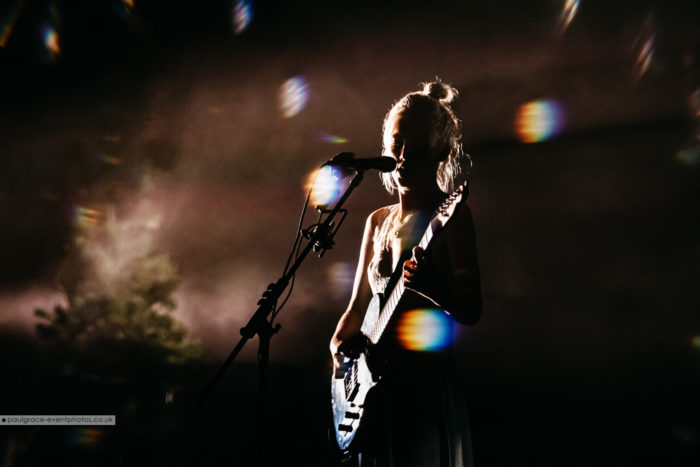 Rowsell’s vocals provide a muscular and infectiously catchy top layer to the live sound. Although she’s often quite a contained presence onstage, the Camden native comes into her own during Don’t Delete The Kisses. Freed from the confines of her trademark black Telecaster, the singer jumps into the pit, mingles with her audience face-to-face and gets the aforementioned swayers swaying. And, for the majority of the set when she is on guitar, her tasteful lead parts are deftly delivered and provide a steady stream of ear worms alongside her to-the-grid rhythm guitar. As a performer, she’s at her best when she lets her hair down. This happens, quite literally, during the first track of the encore – Moaning Lisa Smile. By the end of this crowd pleaser of a number, Rowsell’s carefully coiffured look is transformed into the full Courtney Love in the follicular stakes. Not in a deliberate and self-conscious way but, rather, in spite of it. I wish that Rowsell could have let her hair down, figuratively speaking, for more of the gig as she appeared slightly aloof and detached from the whole experience. I’ve a feeling that ‘end of the tour’ fatigue might be to blame for depleting the singer of energy and enthusiasm. While the quality of her voice and guitar playing can’t be questioned, the same cannot be said of Rowsell’s heart which I sense might not be fully committed to tonight’s performance.

Wolf Alice, nevertheless, present themselves as a tight and decidedly single entity live. And the sense of family and collective enjoyment remains an important part of the band’s show. This is illustrated beautifully during Storms with Rowsell, Oddie and Ellis hopping in perfect unison to the beat – each with enormous grins plastered on their faces. The group also dispenses with the traditional format of having the figurehead being the spokesperson onstage. These duties are effectively taken on by the bassist. With unflappable energy, Ellis brings a life-of-the-party charm to his banter between songs. Equal parts rock ‘n’ roll and heartfelt, the bassist is skilled at conveying the band’s enthusiasm with words. “You’ve no idea how much this means to us”, he says, before the group finish their set with Giant Peach. 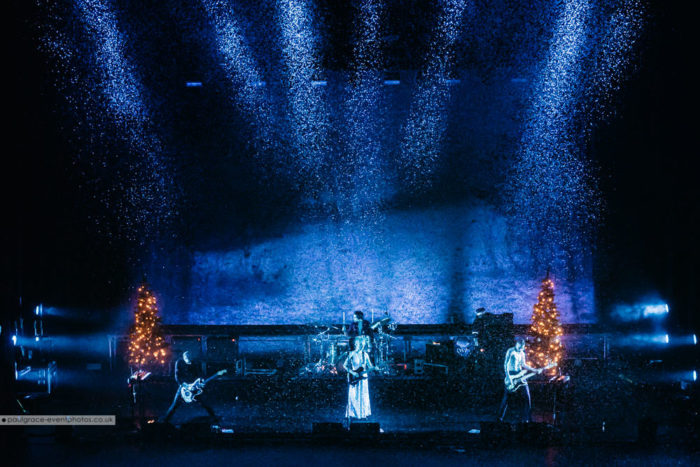 While this final song is in full flight, the stage is transformed in a giant yuletide celebration as simulated snowflakes fall thickly from above. With a snowy forest backdrop projected behind them, Brixton Academy suddenly becomes an annex to Santa’s grotto. By the time the song reaches its climax, the entire band and stage are covered in flakes. As soon as the final chord is struck, and with perfect timing, Slade’s Merry Christmas Everybody is blasted through the PA. Rowsell returns to the pit with yuletide crackers aplenty and pulls them with audience members up front by the crash barriers. The other band members follow suit before the whole gang returns back to the stage to sing along with Noddy Holder. It’s Christmaaaaaaaaaaaaas! And Wolf Alice have made it a white one. For everybody – including the Leavers and Remainers.