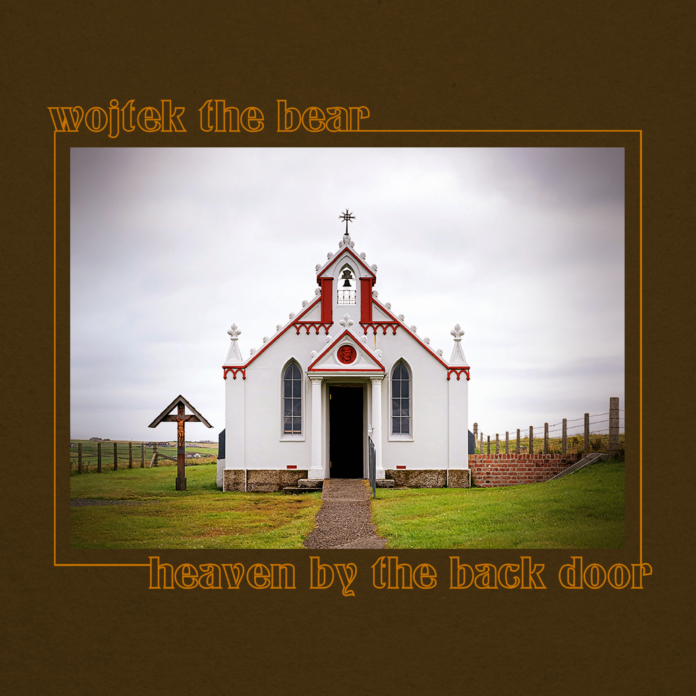 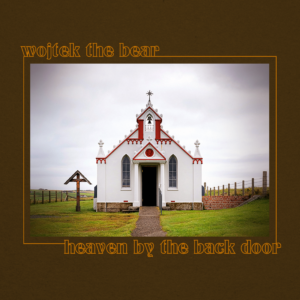 wojtek the bear: heaven by the back door

Last Night From Glasgow’s quest for world domination continues apace with another cracking release. Like the “bear who fought the Nazis” they took their name from, the band take on all comers on this new album. But, as is their style, this revolution will be a beautifully gentle and unassuming thing as wojtek the bear take on the world in their own elegantly subtle lower-case manner.

The band’s sympathetic mix of instruments, including breezy jangly pop guitars, soaring strings and brass, all topped with Tam’s tender soothing Scottish brogue feels like inhaling a deep invigorating breath of fresh air before receiving a warm and loving hug. The mix of the melodies created by the band and the sometimes humorous but melancholy nature of the entirely relatable lyrics are absolutely life affirming.

The vibes are entirely upbeat, emitting a passionately sunny disposition as the familiar pounding beat of single ferme la bouche kicks in, raising spirits and encouraging an outbreak of toe tapping, providing a foil to the lyrics suggesting an altogether different tale. As the tune gives way, it is replaced by another single, with singing strings introducing the more melancholic one thing’s for certain, with its startlingly honest opening couplet, in the metaphoric “I cut my brakes on purpose, I brace for the impact”. As Tam sings “can’t do this anymore” you can’t help but be drawn in and empathise. Despite the honest and touching nature of the lyrics, the song itself is incredibly uplifting.

This is the theme as the album progresses, the refreshing frankness and candour in a lot of the lyrics offset by the stirringly beautiful enriching instrumentation and production. paper talk uses metaphors again to express feelings “a ship in harbour may be safe, that’s not what ships are for” while again the upbeat afrobeat inspired guitars of luck or design hide another less than perfect tale “I used to adore you, but now I endure you”. Closing out side one, fear less is one of the most touching songs on the album, the subtle bass, melody and lyrics, plucking at the heart strings in exactly the right manner.

Elegant bass, brushed drums and handclaps combine to get side two off to a flying start with sunshine vibes of the tide won’t come back. The pace comes back down again with the exquisitely elevated sophistication of the strings led right things in the wrong order.

Title track, heaven by the back door, is almost Smithsian in its refined guitar lines before the heart strings are plucked to within an inch of their lives again on the understated splendour of packing parachutes, the strings the star once again leading the assault on the emotions. And what about that outro…? the magician then leaves you with a little glow as the album ends on a high, a note of optimism, “it’s a start”.

This is exactly what I want and love in an album, one that pulls at every emotion, that puts you through the wringer in some ways, but it speaks to you and you can relate to it. An album you don’t just listen to, you feel every beat, every nuance and raw nerve, every humorous couplet feeling the very essence of the spirit in which the music was played and recorded.