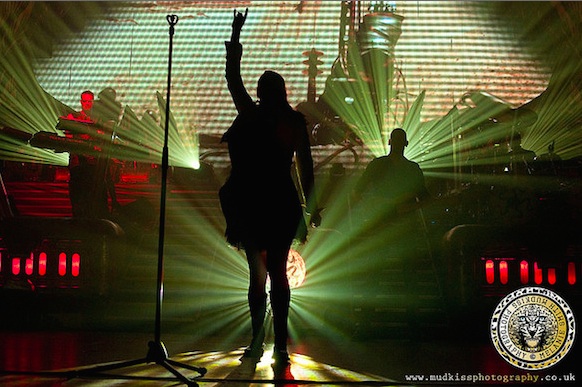 Dutch symphonic metal band Within Temptation have been going for approaching 20 years now. They’re currently on tour and last week played the Apollo in Manchester. For Louder Than War Michael Ainscoe (words) and Melanie Smith (photos) were in attendance.

It felt  almost like a coming together of the kin with the pairing  of Dutch symphonic / metal / gothic rockers Delain and Within Temptation for the opening night of their UK jaunt at Manchester’s Apollo. Alongside the more obvious musical and Dutch nationality  connection, Delain also share a ‘Westerholt connection’ with their keyboardist Martin being a former member of Within Temptation, while his brother and WT Studio guitarist Robert is partner to singer Sharon den Adel in his former band. 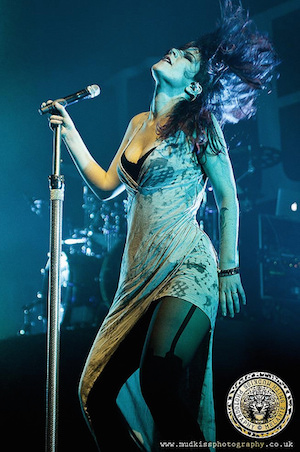 Associations aside, Delain proved to be  not  so much a support act at all; ending their set with the sort of ovation reserved for a headline act, it made the evening feel more like a double bill of the best of female fronted epic rock and metal. In short, Delain were a eye-opener. Formed just over ten years ago and with  a new album ‘The Human Contradiction’ to promote, they did a job and a half in terms of warm up and setting the bar ridiculously high for the headliners.  Given a full production as opposed to the usual basic minimum of lighting and sound afforded to support bands and with a theatre packed with early arrivals all set to catch their set, they delivered a performance  which included not only some impressive new material  in the first half of their set – ‘Stardust’ and ‘Army Of Dolls’ stood out – but a healthy chunk of some of their best pieces from their back catalogue making up a rousing finish. ‘We Are The Others’ and the impressive vocal harmonies of ‘The Gathering’ ensured that anyone unfamiliar with them would be suitable enthralled enough to have a new name on their morning playlists.

Vocalist Charlotte Wessels was undoubtedly the visual focus, at times even with the band literally stepping back into the shadows to allow her to own the stage and deliver her  outstanding vocal lines against some atmospheric keyboard backing. There were no frills or unnecessarily lengthy  guitar solos, simply a full keyboard based sound and making the most of the short time they had on stage.  Judging by the amount of Delain shirts in the audience they were clearly known well to the audience maybe as a result of their association with WT but mark them down as a band to be making their own mark in the genre. 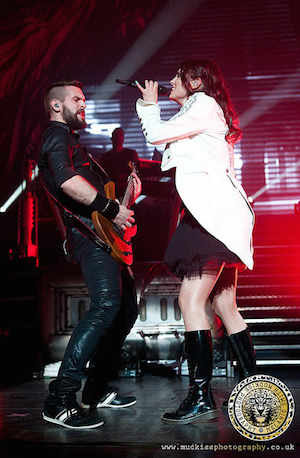 Although Within Temptation’s roots sit strongly in the gothic  metal field, their 15 year back catalogue of material shows more of a range and diversity than you’d anticipate and they are perhaps quite rightly one of those bands who along with the likes of Nightwish , up and coming  Italians Sleeping Romance, and now Delain who  are at the forefront of the female fronted  symphonic metal scene.

They delivered their brand of what’s been called “the optimum balance between the melody and hooks of mainstream rock, the depth and complexity of classical music and the dark edge of gothic metal.”  Also with a superb new album  ‘Hydra’ on release, they upped the ante with a vast stage production – all rounded metal platform risers  for the keys and drums standing either side of a set of steps leading to the top of the stage and allowing for the slowly dramatic  entrance of singer Sharon den Adel for ‘Let Us Burn’ all backed by some (literally) fiery visuals on the video backdrop flanked by two huge flame spitting hydra heads.

Like Charlotte before her, Sharon provides the visual foil for the more guitar based sound of her band – within the first couple of songs, both guitarists  Ruud Jolie and Stefan Helleblad had peeled off some stinging solos.  It was an intense opening 25 minutes  which only slowed for ‘Edge Of The World’ before the brutal riffing of ‘Middle Of The Night’ really upped the level of intensity and passion started to soar; the heavily arranged operatic vocals of ‘Angels’ and in particular the extravagant and apocalyptic  ‘Our Solemn Hour’ being matched by the dramatic visuals of fluorescent green searchlights panning through the washes  of red light. Using the video screen to its fullest, the songs where the band have recorded  duets  were played out with Sharon duetting with the virtual images on screen  –  Killswitch Engage’s Howard Jones making an early appearance on ‘Dangerous’ and Nightwish’s Tarja Turujen helping out on ‘Paradise’ accompanied by clips from the song video,  while Keith Caputo made an appearance in the encore of 2007s ‘What Have You Done.’

Again, an impeccably paced set and song selection meant that the new material from ‘Hydra’ fitted perfectly into the show, even with a couple of tracks coming from the second disc for those fans who’d shelled out for the 2CD version of the album and  included the acoustic  ‘’Whole World Is Watching’ with  Sharon accompanied just by Jolie and keyboardist Martijn Spierenburg.  What was perfectly clear from this opening date was that  Within Temptation and Delain give a  clear affirmation that the demand and support for this brand of melodic and elaborate rock with a big stage show is still there. With the likes of the quality of these performances on offer, the phrase ‘sell it and they will come’ seems ever more appropriate.