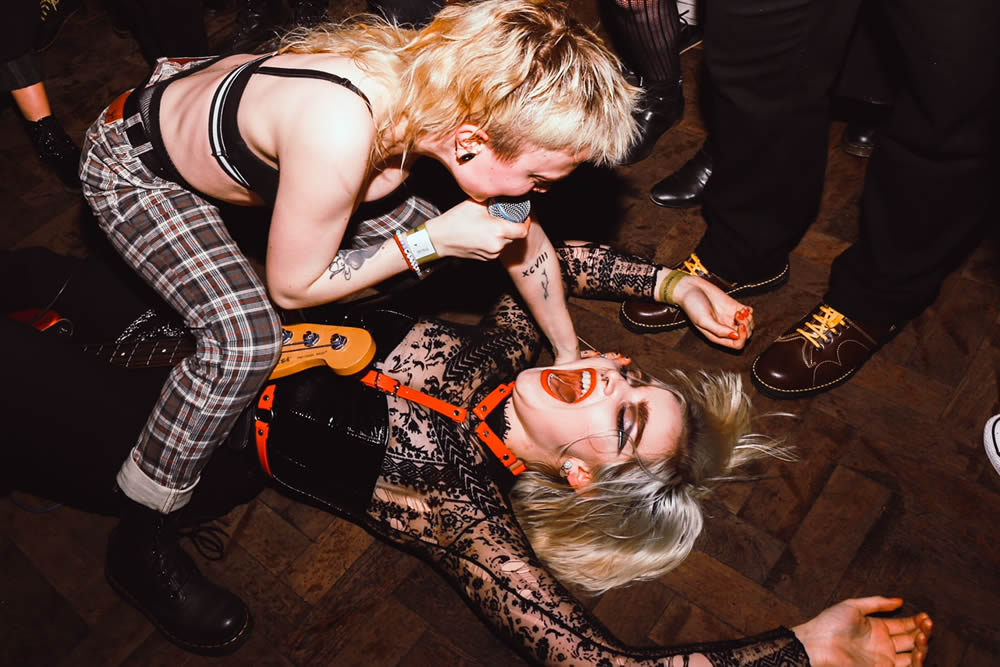 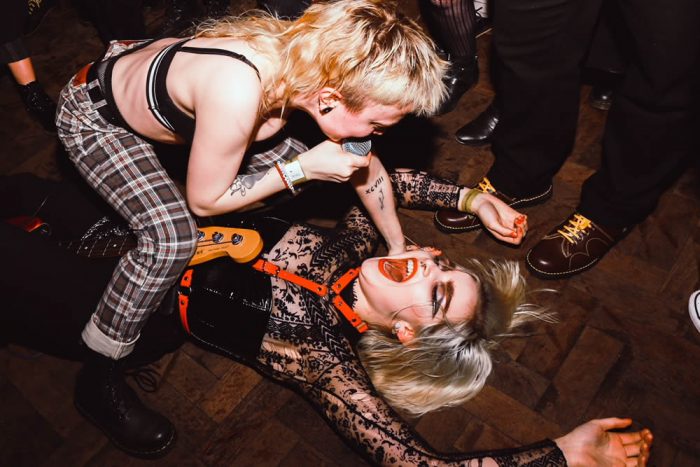 In his first major piece for Louder Than War Will Metcalf interviews Witch Fever who appear this weekend at The Manchester Punk Festival and supporting Cabbage in May.

The debate as to where punk was born is argued on by the old (who were there) and the young (who can read about it as much as they want). Regardless of your view, the immense umbrella which the British punk movement offered is admirable, and will always highlight a huge part of British culture. In terms of the sheer ‘right lets fucking do it’ attitude, the movement can never be praised enough. However, the term has been somewhat high-jacked, leaving us currently in a phase of confusion as to where it now lies after being open in the music industry for so long. For some form of contextualisation of this, see Towers of London frontman, Donny Tourette, and his embarrassing performance on Never Mind The Buzzcocks.

But deep inside the claustrophobic music scene of Manchester, there is something happening.

“Forgive me Father, for I have sinned”, screams the ever-crazed, possessive frontwoman that is Amy Walpole. To the left, the dazed yet concentrated Alisha Yarwood, crafts her pedal board, orchestrating powerful, signature noise. On the opposite side, the corset-clad bass queen that is Alex Thompson, who makes effort to flirt with her frontwoman throughout the set. And beneath the bobbling head of hair behind the drum kit, multiplying the noise which is being created in front of her, sits Annabelle Joyce. Ladies and Gentleman, I give you Witch Fever, the shit hot, uncensored noise of Manchester. And yes, they are the strongest answer to anything which claims to be ‘punk’ on the current market.

“I think punk now is more of an attitude, than a genre. Like what Stormzy did at the Brits.” forwards Alex. It is obviously something which is close to each member of Witch Fever, whichever diverse value that may be. This diversity also reflects the influences of Amy, Alisha, Alex and Annabelle, ranging everything from Velvet Underground to Savages. And a shit load of mutual love for Madonna. “I think it’s just not really caring what people think. And just doing what you wanna do”, Alisha summarises. But naturally, once it becomes popular, there becomes a market, which ultimately ends up with the dreaded branding phase of the recently baptised product. “I think if you’re using it as a brand, it’s not really punk”. 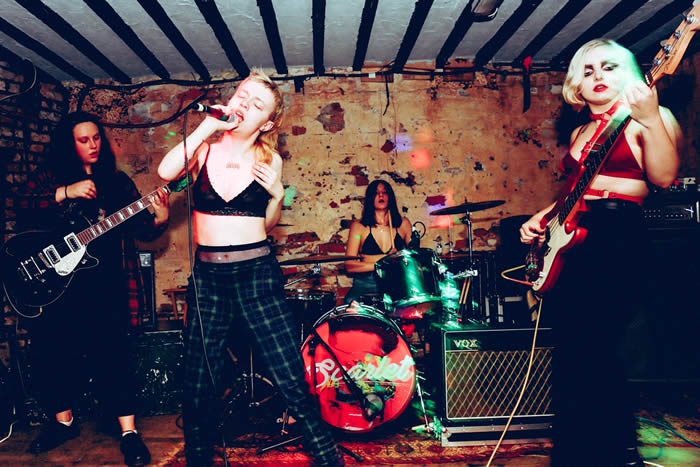 But obviously the world doesn’t stand still. It’s 2018. Along with pot noodles and selfie sticks, the internet now exists, making it easier than ever for anyone to voice anything about anything, with the ability to send to anyone. (downsides of which will be touched on later). And as a result, it is easier for a band to distribute music than ever, which has its benefits. But the main downside is that any set of wet-wipes can label themselves as anything, thus tarnishing a definition that something once held, with punk being a solid example.

The line is very fine, as Amy explains; “I think it is good in the sense that if you’re in a band, you have to tell people what they’re going to see. But trying too hard to be punk isn’t punk. But at the same time, the DIY culture of punk is becoming more and more popular, so, therefore, the music will become more popular, so therefore will attract money. It’s difficult to draw the line. I mean some people would argue that to be a real punk band you have to entirely DIY, not have a manager, do everything yourself”. I mean, what more do managers do than rob you of all your money and leave you with a massive drug addiction?

A disappointed sigh and a collective eye roll follow the next question. And believe it or not, the question isn’t “How does it feel to be a woman in the music industry?”. It does however surround the removal of clothing of the upper half of the body. The tale that we have been told for so long is that any member of a boy band has the right to parade up and down any stage, be it big or small, exposing whatever hairy/hairless chest he may own and does so without question. Yet as soon as a woman feels the heat on stage, the double standards are exposed. “I take my top off if I’m too hot.”, states Annabelle, raising awareness of the very obvious but overlooked fact.

However, aside from this, Witch Fever’s occasional exposure of the female anatomy was originally an attempt at addressing this standard, as Amy gives light; “It’s my body, it’s my choice to do what I want to do with it. For some reason, as soon as its put in front of people the naked female body becomes a sexual object. A body in its natural form becomes a play thing, and something to look at and I think that it is bullshit. It shouldn’t be like that. And if I want to be topless on stage, it should be the same as a man being topless on stage.” 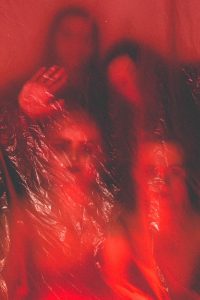 A massively valid point, and clearly an issue that should be allowed to be addressed. It is one of those classic situations where a double standard screams unheard, but when action is taken towards it, it is seen as over the top/unnecessary. “It shouldn’t really have to have a message, because it doesn’t have a message if a guy if he does it”, adds Alisha. Nail, hammer, head.

As powerful as this statement is, when something out of the norm happens in the digital age, there are videos. And when there are videos, there is the internet. And the internet can be a vile, cruel and quite disgusting place. “The real issue was that it was captioned ‘Topless’, and the whole sense of the statement was that a woman should be allowed to do it in the same sense that a man does it”, explains Alex.

Despite the disturbing thought of the high probability of some dirty Herbet getting some form of wrong pleasure from this video, the lack of anger on behalf of every member of Witch Fever is admirable. There is more disappointment than anything. Sort of like how your mum looks at you when you got a shit report at parents evening at school. But it is the small yet important points that the band make on the incident, which emphasizes the importance of the issue; “I mean I’ve never seen a video of a man (titled) ‘topless’, with a video on YouTube saying topless”. The videos are there, the intentions, sadly, are very different. “I mean I’m not saying I’d never do it again, but I just feel that audience needs to be right. Its crazy how when I’ve done it before, and you literally see the whites of every man’s eyes like ‘Holy shit, tits’, when I’m really not doing it for that at all”, states Amy.

Once past the aggressive stage presence, the humble attitude of Witch Fever comes as quite surprising. Witch Fever’s unique lyricism of twisting misogynistic oppression with tongue in cheek humour, is no doubt the most original within its field. When you compare the likes of their debut single, ‘Carpet Asphyxiation’, a song exposing the unsung side of oral sex, to lyrics such as ‘take your eyes off me, take your hands off me’ which feature in up-coming single, ‘Toothless’, it is surprising how little they value themselves in terms of new wave feminism within todays music industry.

When asked about where they see themselves in context of their actions and statements they make towards the issue, only a confused expression, before Alisha and Alex gingerly follow up with; “There are a lot of female bands which have done it… I don’t feel like we’re doing anything new by doing it”.

However, Witch Fever are far from just “the ones who get their tits out on stage”, which sadly seems to be the common response to “have you heard of Witch Fever?”. “I think we’re pretty bored of it to be fair” forwards Alex, before a collective response of agreement. As empowering as the message is, ultimately, their full reputation doesn’t and shouldn’t rely completely on a past statement, which was damaged by the perverts around it; “It gains an interest which I don’t want. To be fair, I did expect it, and I did know it would happen, but not to the extent that it did”, reflects Amy.

I mean, they’re still fucking here. Despite the recent incident, Witch Fever are flying higher than ever. Their second single “Toothless” is due out 19th April, with arguably their biggest gig to date coming up, featuring alongside The Blinders and PINS, on Cabbages ‘Glamour At Thee Ritz’ event which takes place on May 19th. As well as that, Witch Fever aren’t exactly struggling outside of Manchester either. Having played huge domestic supports to the likes of Moonlandingz and Starcrawler, Witch Fever have played everywhere from Camden Assembly to Keighley Exchange. 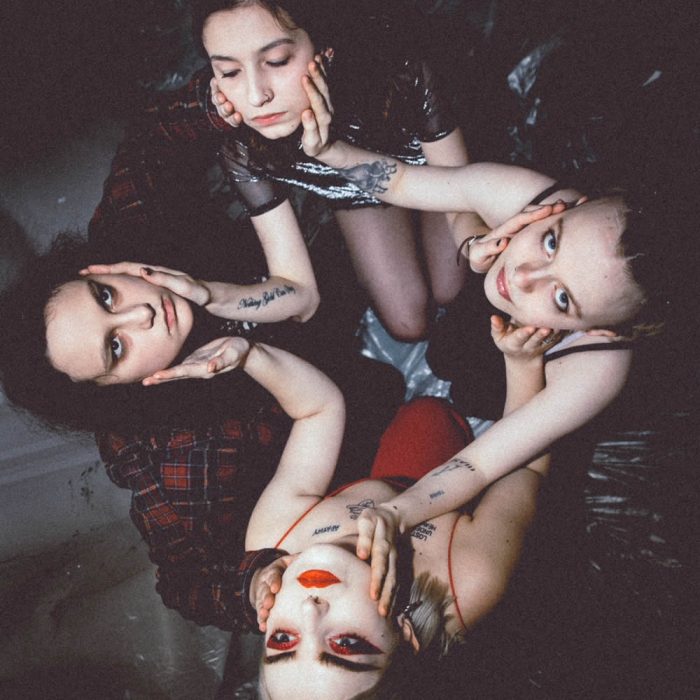 After a heated debate as to where and when their best gig was, there is a common denominator; hometown gigs are the best. However, the fun is cut in half when you don’t have a tour bus. This combined with being a bankrupt student means one thing; the dreaded Megabus; “Flat out mega busses. Coming back from a gig, hanging out of your arse. Six hours” reflects Alex, who is clearly disturbed at the thought.

But when this is an agreed low point of band life, Witch Fever are clearly doing something right. In terms of the current line-up it is very clear judging by the synchronised positive reaction how comfortable Witch Fever are as a band and as friends. Reasoning for this response is varied, however, with newbie Alex commenting “I think being in a four-piece is just so much tighter”. A moments silence follows before Amy kindly reminds a huge benefit of being in a four-piece, that being; “You can all fit in one taxi which is better”. Well, sorting out transport does sound like a very managerial thing to sort out so…

However, throughout the interview, Amy also highlighted a very deep rooted problem;

“Thankfully, because I have a solid group of women around me and I don’t put myself in vulnerable spaces, nothing has ever happened that has been really bad. But its just something that I have to be aware of, where I put myself in a venue”.

Is that statement alone not ring a lot of alarm bells? “Vulnerable spaces”? This is 2018 for fuck’s sake.

So it turns out, just like men, women also tend to get warm on stage, and also like men, women like to feel comfortable on stage. And as well as that, it is time to move on. Respect this talented four-piece for the talented songwriters which they are. But the three main things you should fuck from this is are men, video cameras and the entire fucking internet. Surely that is the punkest response to anything these days right?

May 19 – Manchester – Glamour at thee Ritz with Cabbage, Pins & The Blinders