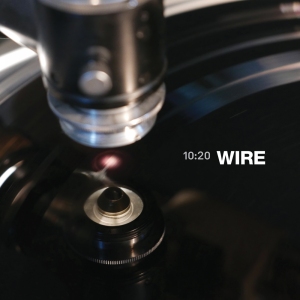 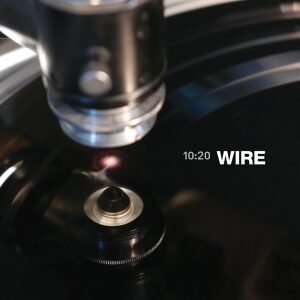 Wire have always evolved. No sooner had they hit us with the proto-punk of 12XU back in 1977 than they veered off-course to define post-punk with Chairs Missing and 154. Over the course of the next four decades they have continued to reach new artistic heights while remaining true to their experimental aesthetic, which is one of constant reinvention around their core principles.

They are, as John Peel once famously said of another grooup that came out of punk as a fully formed post-punk band, “always different, always the same.”

Originally scheduled for Record Store Day (originally in April; a staggered event over the last weekends of August, September and October), 10:20 is a mixture of of pieces that couln’t be accommodated on their previous 17 studio albums (or previous 15 compilations) as well as compositions that evolved substantially after their initial studio recording through subsequent live performance.

Side one (tracks 1-4) was recorded in 2010 with the band’s current line-up of Colin Newman, Graham Lewis, Robert Grey and Margaret Fielder of Laika, who had played guitar with them on tour following Gilbert’s departure the previous year, and Matthew Sims (who was about to replace him as a permanent band member). The second half (tracks 5-8) was recorded more recently by the current quartet (minus Fielder).

10:20 works in many parallel ways, all of them equally successful: as a partial retrospective; as a new studio album; as an introduction to the band for beginners; and, definitively, as an example of their restless desire to deconstruct and reconstruct their own work (something they have done in the past on albums like 1989’s It’s Beginning To And Back Again, which took a collection of live recordings and reconstructed them in the studio).

Boiling Boy, for example, first appeared on 1988 album A Bell is a Cup… Until it is Struck. The original studio outing was an almost pastoral psych-tinged affair that only hinted at the monstrous Krautrock beast it has finally become after more than a decade of tinkering, becoming along the way perhaps the most played Wire song ever.

Throughout the 2000s it became one of the acknowledged highlights of Wire’s live sets as it morphed into this: a foundation of Grey’s precise motorik drumming and Lewis’s throbbing monotonous bassline while Newman, Simms and Fielder weave a thick web of guitar textures that grow into a blizzard of noise, and Newman solemnly instructs us cryptically to “Lock up your hats.”

German Shepherds is another that originated in the same late-Eighties era (1988 It’s Beginning To And Back Again) that has developed a second life on stage. One of Lewis’s most immediate yet most enigmatic lyrics (“I saw three dogs flying, there was a man on the end / Squaring a circle and studying its end”) it’s now been given a summery uptempo arrangement disguising a characteristically slanted strangeness at its heart. The recording is also notable in that it includes vocal contributions from Newman, Lewis and Fielder.

Third track He Knows was developed back in 2000 when Bruce Gilbert was still with the band, and emerged in a reinvigorated form almost a decade later, becoming a staple of Wire’s live show. This is the only studio recording to have surfaced. A Wire song with an atypical structure, it’s a shimmering slow-paced piece built around tension and release. Newman’s vocal is cool and restrained until the keening chorus, which blossoms with its repeated refrain of “We’re hypnotised…”

Side one (of the vinyl LP) concludes with the visceral urgency of Underwater Experiences, a song dating right back to their 1978 second album Chairs Missing, for which it was demoed but dropped from the final album – presumably because it sounds more like something from Pink Flag with its minimalist thrashing. You could easily imagine punks pogoing to this at the Roxy.

Having lain dormant for a couple of years, it later appeared in two fast, abrasive, contrasting versions on Wire’s notoriously confrontational live album Document And Eyewitness, and a fifth iteration surfaced on 2013’s Change Becomes Us. But, for all its previous iterations, it has never sounded quite as it does here, with its hectic but precise pell-mell of scything guitars and kick drum.

Side two opens with The Art of Persistence, prompting the thought that their song titles are an art form in themselves: a song of that name couldn’t really be by any other band. Written when Wire regrouped for a third time in 2000 – but reminiscent of their work from 20 years earlier – it was previously only available as a rehearsal room run-through on long deleted EP The Third Day or as a live version on legal bootleg album Recycling Sherwood Forest.

Here the song receives the full studio treatment as the group transforms it into a piece of spacious guitar pop with an edge of unease. Grey’s drumming is crisp and urgent, and Newman’s calm, confident vocal belies the lyric’s nervous uncertainty, producing a song that wouldn’t have sounded out of place on third album 154.

Small Black Reptile originally appeared on the band’s 1990 album Manscape as a skeletal reggae-tinged experiment (video here) and of all the reconstructed songs on 10:20 is the one that has travelled the furthest from its genesis, retooled here as a piece of melodic rock, with Simms’ guitar playing to the fore (video below).

With its warm synth tones and spindly lead lines, Wolf Collides is another that sounds as if it should be sitting regally on side two of 1978’s Chairs Missing but was actually written in 2015 and became a firm favourite in that year’s live set. This version was recorded for inclusion on 2017’s Silver/Lead but was omitted due to lack of space. Here, another witty off-centre Lewis lyric is threaded through a soundscape where mystery and enigma mutate into a becalmed haze. This is their equivalent of easy listening; Wire being Wire, it’s an uneasy, unsettling experience.

The album concludes with Over Theirs, another attempt by Wire to re-imagine their 1980s output. Although the song appeared on The Ideal Copy and has been an intermittent component of the group’s live shows since 1985, its true power had never been properly harnessed in the studio – until now. A grinding monolith, propelled by vast slabs of sound, this nine-minute sonic behemoth is defined by its dense guitars and strict drum pattern before collapsing into itself to become an impenetrable mesh of drones that rounds off both the song and album.

10:20 is also available to pre-order from Sister Ray Records here.