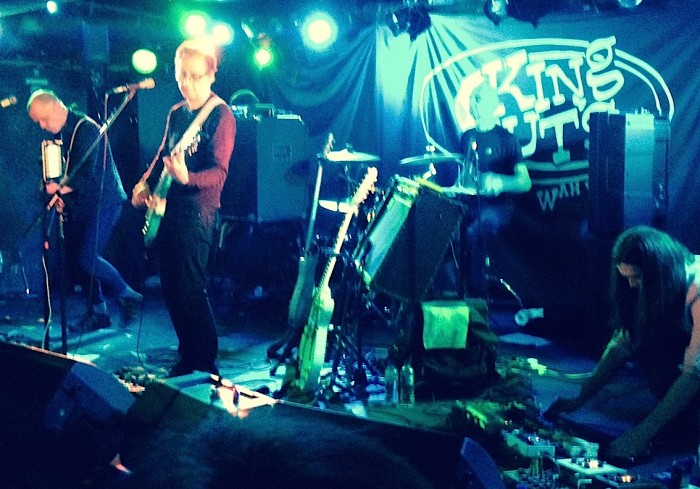 Long time Wire fan Mark Fleming reviews the band’s recent show at the legendary King Tut’s Wah Wah Hut in Glasgow, one of the last dates in the tour plugging their new album which John gave 9 / 10 in his review.

I bought my first Wire record, their debut album ‘Pink Flag’, when I was 16. I’m 53 this year, and have just bought their 14th studio album, ‘Wire’. Longevity does not always guarantee any band remains inspiring, but Wire have always gone against the grain, continually reinventing themselves and challenging audience preconceptions.

Wire came to prominence during the original wave of punk bands, but even then they were gloriously insular. Fans and critics will always argue about the extent to which their output from the 1980s onwards has come close to emulating the heady heights of their first three albums, ‘Pink Flag’, ‘Chairs Missing’ and ‘154’, a magnificent body of work that distilled punk’s energy into a unique sound signposting a world light years beyond three-chord thrash. But they have been consistently interesting and arresting, and their most recent releases have been amongst their most satisfying listens.

On Monday night they played in King Tut’s in Glasgow. Support came from PINS, an all-female band who played a tight set of excellent songs, balancing melody with furious riffs, with shades of garage rock and the new psychedelia of the likes of Toy.

Wire seemed to take an age to set up, members drifting on and off the stage to tune-up and adjust the sprawling pedalboards, while discordancy bellowed from the PA. Eventually they kicked off with ‘Blogging’, track one on their eponymous new album. A great warm-up, its mid-tempo rhythm, crafted by superbly metronomic drummer Robert Gotobed, is sliced up by guitarist Matthew Simm’s stabbing tremolo chords, while Colin Newman playfully juxtaposes modern technological obsessions with Biblical imagery. As the gig unfolded, Wire focused on ‘Wire’, interspersed with random excerpts from various stages of their career.

Typically, interaction with the rapt audience rarely strayed beyond a nodded acknowledgement of their thunderous applause. But they are a band of such singular self-belief that it has always been about the music. And what fabulous music it always is.

As is the norm, they played extensively from their freshest batch of songs, including ‘Swallow’, ‘Split Your Ends’, ‘Burning Bridges’, ‘Shifting’, and ‘In Manchester’. ‘Octopus’, vaguely reminiscent of The Cure on the album version, is much rawer and edgier on stage. Sleep-Walking also benefits from the live setting, its ponderous pace building in momentum as Newman captures the spirit of the political climate: “The narrowest vision often has the widest appeal. A lack of decision leaves us open for a steal.” This track is the perfect showcase for Simms to display his versatility with the sound affects that continue adding potent layers to the songs. Since collaborating on 2011’s ‘Red Barked Trees’, he has joined Wire’s ranks, his sonic alchemy amply filling the creative gap caused by original guitarist Bruce Gilbert’s departure after ‘Send’. It’s interesting to note that Gilbert’s decision seemed at least partially based on his disillusionment with playing guitar: from the get-go he hated the concept of Wire being in any way a ‘rock n’ roll band’. Simms’ unconventional style, conjuring mesmerising noise from his array of pedals certainly carries on that spirit of subverting rock clichés.

‘Harpooned’ was not so much a wall of noise as an ear-shredding tsunami, with Newman encapsulating the paranoia of the times: “I’m worried I’m worried, I’m frightened as hell, I heard voices echo, way down in my shell”.

There were issues with the sound balance, and when the band were in full pelt, there was so much lower-end the PA threatened to collapse under the strain. As certain points Graham Lewis’s bass was so thunderous it sounded as if one of Glasgow’s underground trains was about to crash through the walls. But when the proper mix was achieved, it was like a beautiful sunlight cleaving storm clouds. ‘Blessed State’, a rare outing for a ‘154’ track, created a perfect counter-balance for the dense shoegazing, its floating melodies underpinned by Lewis’s vocal delivery. The bassist also sang ‘Mekon Headman’, from 2008’s ‘Object 47’.

‘Change Becomes Us’ formed the backbone of Wire’s last appearance here in 2013, and while they have, inevitably, moved on from those tunes, they did blast through ‘Stealth of a Stork’, their spritely re-working of ‘Witness to the Fact’ from ‘Document & Eyewitness 1979 / 1980.’ Another highlight was that album’s ‘Adore Your Island.’

The encore took the fans all the way back to ‘Brazil’ from ‘Pink Flag’, and concluded with ‘Used To’, from ‘Chairs Missing’.

The sound wasn’t perfect, but it seems churlish to dwell on that issue. Those final tracks hark back to the period when Wire springboarded from punk into a whole new sonic universe.  ‘Wire’, the release they are currently touring to promote, indicates that they are still relishing their mission to explore that universe.

All words by Mark Fleming. More work by Mark on Louder Than War can be found at his author’s archive.