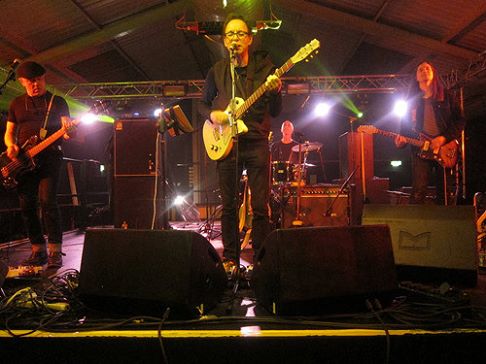 A Wire review in rhyme

but wiser and mean

Can’t remember which one.

I liked the fact they didnt give a fuck and were kinda messing with the audiences heads. Some bloke was getting well stroppy cause they didnt acknowledge the crowd. It was interesting that they seem to have sonically gone back to the bands they influenced (Big Black, Swans, Sonic Youth, My Bloody Valentine) and kind of done there own thing with it. The new guitarist was great, getting some interesting noises out of his guitar. (Matt Clark)

Dark, pretty uncompromising but still fresh. I like the fact that three 60 year old blokes aren’t playing the game. Compare it to how sad I felt seeing the Buzzcocks last year. Rather see a band still trying. (Dave Todd)

I liked what Graham Lewis said “I met a guy outside who said he had waited 35 years to see us, I thought why didn’t you get on a train we’ve played other gigs”. (Phil McCarthy)

I enjoyed WIRE mainly – although a few times I was glancing at my watch. Was very loud and a decent turnout I thought. Didn’t expect any 77-79 era songs so was surprised when they played ‘Brazil’ in the encore. (Rich Levene)

I really got into it… Was very dark powerful..exellent. Would have been nice to hear some early stuff but I have a cd collection for that (Bubba)

I thought that some of the metaphysical imagery was really particularly effective. Interesting rhythmic devices too, which seemed to counterpoint the surrealism of the underlying metaphor of …. I didn’t go. Football went to extra time. (Richard Emery)

A standard review of Wire

“Heeelllooo Southampton!  We’re Wire.  Great to be here on the sunny southcoast. Is everyone feeling alriiight?  We’ll soon change that huh-huh-huh.   This first song is a little number off of our new elpee called ‘In Manchester’ but just for you folks we’re changing it to ‘In Southampton’!  Take it away guys…”  (Massive applause and whooping)

Although there was one guy who thought that maybe it should’ve.  He kept demanding that Wire acknowledge the audience. Which they didn’t. He failed to understand. It says Wire on the ticket, on the posters, on the t-shirts on sale at the merch stand.  Wire don’t need to introduce themselves.  They are here to exhibit their art and not be part of some light entertainment rock’n’roll circus game-show on ice.

That said, my friend Binky and I did amuse ourselves shouting “Tell Us A Joke” when it went quiet. Slightly less predictable than shouting ’12XU’. ” I do it at Swans gigs too” grinned Binky.

Wire were amazeballs. I bet they’ve never been described as that before.  Fucking loud, heavy and intense.  The almost chilled-out laid-back psych feel of some of the new (albums) songs was replaced with a tense, dark energy when translated live.

Historically, when you think about it Wire had their thunder stolen by Joy Division, then the Cure, and many others. So it is astounding that now in 2015 they still sound as uncompromising and as at-the-top-of-their-game as they do.

The set-list was pretty similar to this one from the Lexington a few days before, so taking in tracks from a Bell Is A Cup (Silk Skin Paws), Chairs Missing (A Blessed State) and Pink Flag (Brazil) but mainly the new eponymous album which really does almost match up to 154 in the Classic Wire stakes.

A full ninety minute set meant that it did go through peaks and troughs of greatness to grating-ness for those of us who aren’t full-time Wire fanatics and if I’m honest the lack of any interaction between band and audience, and anything remotely resembling dancing, or even moment, bar the occasional nodding of the head, from the throng meant it wasn’t the most joyful night out.

Sleep-Walking was one of the highlights though, with its assertion that ‘the narrowest vision often has the widest appeal’ and arguably the bands most direct political statement.

The  guitar-noise from young longhair Matthew Simms was absolutely incredible when it went off on wild but carefully-plotted tangents. I thought I imagined the others glance his way on one occasion as if to say “Steady on there, you were almost rocking-out there” as they wagged a tut-tutting finger at him.

That probably never happened either