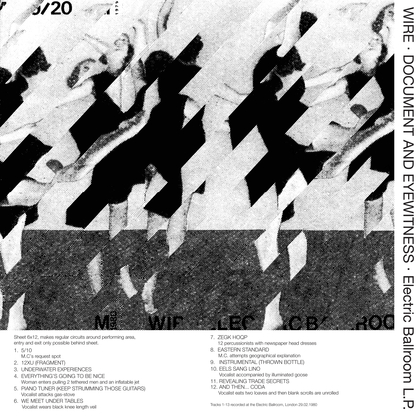 Wire are re-releasing an album that divides fans, a wonderful live album. It perfectly captures the excitement and angst in the Electric Ballroom back in February 1980.

A reissue of one of Wire’s most dividing albums, predominantly recorded live at London’s Electric Ballroom in February 1980. It is an album that has divided fans, as did the live performance, which saw bottles thrown at the stage throughout. However, this all adds to the atmosphere, they go far to capture the spontaneity of the performance.

Opening up with 5/10, capturing the sparseness of parts of the performance, it feels like the band is almost warming up for what is about to ensue. As the bass builds the vocals kick in, typically snarled heavily and reverbed, never too densely populated though. Following closely behind in almost complete contrast is 12XU, which for me is one of the greatest Wire tracks around.

The typically experimental nature of Document & Eyewitness shows through in the briefness of a number of tracks, coupled with the more improvised and expansive jams like ZEGK HOQP and closing track And Then…….Coda. However, Piano Tuner (Keep Strumming Those Guitars) bucks this trend, it’s more fully-formed like that which we’ve become accustomed to hearing from Wire.

It’s brash it’s brilliantly loud and it truly brings the album to life. It’s said that these songs were particularly under-rehearsed but that really adds to the charm of this performance; it’s Wire at the artistic best. Instrumental (Thrown Bottle) is perhaps where they reach their peak, the thrashing guitars and abstract instrumentation build to a crescendo and then almost die off instantly.

The penultimate track Revealing Trade Secrets is again a fairly straight up Wire track another solid guitar driven track. However, as it closes out you can hear the crowd yelling in disgust as the band continues on to And Then………Coda. An expansive soundscape is created somewhat clumsily to begin with, haunting vocals and deep bass drive the track. As the track reaches its midpoint, sounds begin to be phased out as the set is quietly closed out.

As on the original release there are seven extra tracks from a show the previous year in Notre Dame, and one from Montreux whilst supporting Roxy Music. These are a lot more of what you’d expect from Wire, guitar driven snarling lyrics from Colin Newman. Played with pace filled with angst and for the most part less than three minutes.

As part of this re-issue there is also a number of singles B-sides and rehearsal room recordings to tuck into.

This is Wire at their most experimental, causing Geoff Travis to remark that the band were “Completely Mad.” Wire are enjoying a renaissance and whilst this album may divide fans, times have changed and this album serves to prove that it still has the ability to move and inspire thirty odd years after its original release.

I am all for this album, it shows one of the most influential bands of their time at their most experimentally brilliant phases. It should also be noted that the band were still yet to create many of their classic tracks Drill, Boiling Boy and Comet. This album serves its purpose as a stepping stone as the band grow and find their place in an ever changing musical landscape.

Wire can be found here, they’re also on Facebook and Soundcloud.